Sodium is under fire as a nutrition no-no. Here's why and how to avoid it.

Move over, transfat and sugar! Sodium is under fire as the next nutrition no-no. Sodium levels in foods have been on the nutrition watch list for years because too much of this mineral is associated with high blood pressure, which can increase the risk for heart disease and stroke.

The main source of sodium in the diet is salt (sodium chloride), which is 40 percent sodium by weight. In April, the Food and Drug Administration announced its intent to examine ways to reduce salt in the American diet, beginning with a call for voluntary cutbacks from the food industry.

According the National Health and Nutrition Examination Surveys, here are the top 10 individual sources of sodium in the American diet, based on the combination of sodium content and frequency of consumption.

Lists of the saltiest foods

Why do we need salt? In our bodies, sodium regulates muscle contractions, nerve impulses, water levels and more. Every cell needs it, and we’re programmed to like it. Sodium combines with chlorine to form sodium chloride (NaCl), our ordinary table salt.

But if you take in more sodium than the kidneys can handle, the blood retains water, forcing the heart to work harder. This increases the risk of high blood pressure, heart attack, stroke and avoidable death.

Who should care about consuming too much salt? According to the Centers for Disease Control and Prevention (CDC) just about everyone needs to eat less salt! The CDC states that 70 percent of U.S. adults should limit sodium intake.

The U.S. Dietary Guidelines recommend healthy adults consume no more than 2,300 milligrams of sodium (about one teaspoon of salt) per day. A lower limit of 1,500 mg per day is recommended for adults with high blood pressure, those older than 40, and all African-American adults.

Under growing pressure from doctors, consumers, government and advocacy groups, big-name food companies are shaving sodium from soups, snack foods, sauces, condiments and other products. Here are some recent developments.

A New National Goal. For decades, Americans have been ignoring advice to eat less salt — mostly because it’s hard to avoid. Many processed and restaurant foods are loaded with sodium.

For manufacturers, cutting salt requires more than just laying off the shaker. Salt balances flavors and textures in products such as bread, cheese, cereal and yogurt-based drinks that don’t necessarily taste salty. It acts as a preservative, fighting the growth of bacteria. Perhaps the biggest hurdle of all is that without sodium, food can taste bland.

To lower salt levels, companies are turning to new strategies, from substituting other spices to developing molecules that can replace or enhance salt. Many restaurant chains are trimming salt content and now provide sodium information on their websites or menus. Considering that trans-fat removal took about two years, salt won’t disappear overnight.

Reducing salt at home. Nutrition labels on packages can help you keep track of sodium. Most of the salt in our diets comes from processed foods such as salad dressings, soups, baked goods and snack foods, so cut back on portions. Pickles, cheese, smoked meats, gravies, broths and sauces (barbecue, soy) are usually high in sodium, so use sparingly. Some foods now have lower-sodium versions and many are better-tasting than what was on the market a few years ago.

Just a light sprinkling of salt on scrambled eggs or fresh sliced tomatoes can give you the salt flavor you crave. 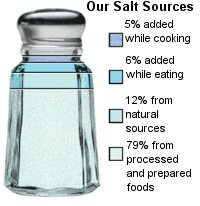 Sea salt (which by weight contains the same amount of sodium as regular salt) is often brighter and livelier in flavor so you tend to use less.

Good news: Taste buds adjust. Most people who cut back on salt get used to it in about three weeks.

DASH to it! The National Institutes of Health’s DASH Diet (Dietary Approaches to Stop Hypertension) is a healthy eating style that can lower sodium intake.

The key to the DASH diet is variety. It includes lots of whole grains, fruits, vegetables and low-fat dairy products. It also includes some fish, poultry and legumes. The fruits, vegetables and low-fat dairy products in the DASH diet are naturally low in sodium. That means it’ll take less effort to reduce the salt in your diet.

The mix of potassium, calcium and magnesium in the DASH diet also helps the body excrete salt. For more on the DASH Diet see www.nhlbi.nih.gov.

Which foods have the most salt? A recent article on msnbc.com highlighted the 20 saltiest foods in America’s popular chain restaurants.

Miso Soup. One cup of miso soup typically contains 700 to 900 milligrams of sodium. Look for canned soups with "low sodium" or "reduced sodium" on the label.

Cottage cheese: Some low-fat brands pack more than 900 mg of sodium into a 1 cup serving. Better choices: One cup of plain yogurt, which has about 150 mg, or 1 ounce of Swiss cheese, which contains 54 mg.

Salsa: Many brands, like Pace Chunky Salsa, contain 230 mg of sodium per 2-tablespoon serving. Look for brands made with "salt-free" tomatoes.

Dill pickles: A single dill typically contains 830 mg of sodium. Have a sweet gherkin instead or, better yet, ultralow-sodium fresh sliced cucumber.

Croissant: All that buttery flakiness packs in more than 400 mg of sodium. Ditto for corn bread. Instead, choose reduced-sodium whole-grain breads or, heck, even white bread; either typically has fewer than 150 mg per slice.

Salad dressings: Some brands—like Newman's Own Low-Fat Balsamic Vinaigrette—pack in upwards of 700 mg of sodium per 1.5 ounce serving. Drizzle on your own oil and vinegar or read labels carefully and aim for fewer than 150 mg per serving.

Canned tuna: It typically contains 300 mg of sodium per 3-ounce serving. Mix in a tablespoon of mayonnaise and you get another 90 mg. Better choice: fresh grilled tuna steak, which has just 40 mg of sodium.

Althea Zanecosky is a Philadelphia registered dietitian and national spokesperson for the Academy of Nutrition and Dietetics.