As if to provide an introduction to Women’s History Month, the recent Ken Burns documentary Prohibition showed the intimate connection between women’s right to vote and Prohibition. Wheels of Change: How Women Rode the Bicycle to Freedom (National Geographic, $18.95, ages 10 and up) similarly combines the advancement of women and their bikes.

Amelia Jenks Bloomer popularized the garment named after her to make women more comfortable, which also helped make them more mobile. Women made numerous biking inventions, including the bike lock, and some of the most famous 19th-century women were bike racers. Author Sue Macy enlivens her story with evocative old photos of a simpler world when bikes were high tech and women rode their way to modernity. 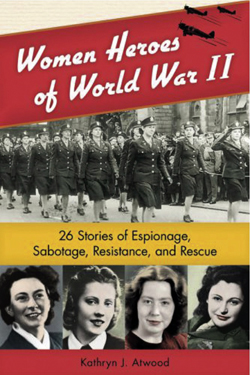 Women Heroes of World War II: 26 Stories of Espionage, Sabotage, Resistance, and Rescue (Chicago Review Press, $19.95, ages 12 & up) tells the compelling story of volunteering and humanitarianism in a world focused mainly on the heroism of men.

Women could have lived passively during the war, but author Kathryn J. Atwood writes about Hannie Schaft, who shot German officers in her native Netherlands, and Corrie ten Boom, another Dutch native who sheltered Jews and, like Hannie, was captured and sent to a concentration camp.

They could have escaped even worse treatment but followed their consciences when they did not have to. Women’s History Month gives a unique perspective on the unique contribution of women in worlds they may not have made but did make better.