Of Broken Bones and Tummy Bugs

I told my husband on New Year's Day that 2012 would be the year that one of the kids would break a bone. Somehow, I just knew. In my house of many children, there have been countless kiddy collisions, catapults off of couches and chairs, bad falls, bumps and bruises galore. Most of these incidents include my four year old, LT who climbs and jumps off of everything in sight no matter how many times he's reprimanded. I thought for sure that he would be the one to finally do it, to finally break a bone.

It didn't take long for fate to fulfill my prophecy — only one month into the new year. I was totally wrong about which child would take the title of first bone broken — nope, not my Spiderman four year old. Instead, the baby! (He's 2… but still my baby).

We Slide into the ER

We ventured to the local park on a beautiful 60-some degree day. My husband had to talk me into this… as I was determined to work all day. Once there, my husband and I took our littlest ones, AJ and ML up the large two-story play set to "race" each other with kiddies in laps down the two adjacent tube slides. After one successful ride down, we both climbed up to do it again. This time, while AJ was seated in Dearest Hubby's lap, baby threw up his legs before Hubby could stop him and his sneaker caught the slide and dragged, meanwhile the two of them kept going — you get the picture?

AJ was understandably upset long before we realized how serious his injury was. I thought initially he pulled a muscle but after several attempts to allow him to walk, he collapsed each time screaming and my Mommy heart said to the ER we go. X-rays confirmed a fractured tibia. I cried. AJ didn't cry at all, oddly. He looked more annoyed than anything else.

My Mommy heart said to the ER we go.

We were referred to duPont Children's Hospital and we spent a good five hours there. AJ put up with everything in stunning fashion. He did receive some pain meds through an IV but other than that, he was cooperative with the x-rays, mostly cheerful and very curious about the application of his cast. We watched movies, read books and photo documented the whole thing. I don't remember being quite so calm when I broke my foot when I was little — AJ is a brave, brave man.

Since then, AJ had his cast removed and replaced at the cast clinic. His original cast wasn't high enough. He's not supposed to be walking on his cast but trying to keep him from doing so has been insanely difficult. He is one determined little dude!

I think all that time spent at the hospital gifted us with the most undelightful tummy bug, as every single one of us, even newly broken-legged AJ, was stricken with what felt like (to me) near death symptoms over the weekend. I ate one jello snack pack, that's all I could manage. We were all, as a family, in the same sickly boat, so at least we were a team about it. We spent an entire day lying all over the living room and doing what sick people do… 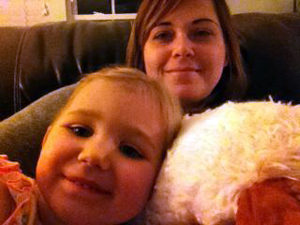 Now that we've all received our much desired good health back, I spent the morning scrubbing and disinfecting every object, all the furniture and every bathroom in the house…. oh, the joy.

So I guess the moral of this story is Do Not Take Small Children On Playground Equipment Meant For Older Children… even if you are accompanying them… because stuff happens anyway. If you follow this rule, then you won't have to spend an entire afternoon and evening in an emergency room watching your little guy endure all that pain that comes with a broken bone… and your other kids won't be laying all over the hospital floor making imaginary snow angels and contracting disgusting tummy bugs in the process that spread to everyone in your household.

All right, all right. Big deal. Moms and Dads take kids down slides. Kids break bones. Families get sick… it's called life. There's no moral here. There is a happy ending, however, as all that time spent in the hospital and the subsequent laying around together in disease brought us much closer together. I haven't snuggled so much with all my kids at once like that in who knows how long — the snuggling seemed to be the only thing keeping us all sane and hopeful. I guess it took all that to slow me down

for once and just be with my kids, doing nothing but holding each other. Darn, there was a moral.