The MetroKids children’s music review column Sound Off! by Kathy O’Connell received the Bronze Award in the annual Editorial and Design Awards, presented by the Parenting Publications of America (PPA).

"These music reviews offer a broad array of choices for parent, while providing authoritative and informative reasons for the selections. The tone and voice of the writing makes for interesting reading," said the contest judges, who are members of the University of Missouri School of Journalism faculty.

O’Connell is host of the Peabody award-winning Kids Corner  show on WXPN radio. She has written Sound Off! for MetroKids since 1994. 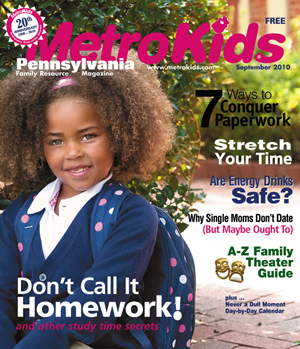 The judges awarded a Silver Award for design to MetroKids for the September 2010 cover, which featured a picture of CoverKid Nevaeh B, age 5, of Burlington, NJ.

The cover was designed by production manager Tracie Rucker. "The child’s direct stare will attract readers’ attention. The unusual placement of the subject, facing the edge of the frame, adds interest. The colors are harmonious," said the judges.

The PPA awards are the 39th and 40th that MetroKids has won since 1990. The nonprofit PPA includes more than 115 North American and Australian parenting publications.