James McMullan’s Leaving China has the look of a children’s book, with text filling the page on the left and an image filling the page on the right. But the cover depicts a scenario no child should have to face: a boy being pushed toward the ramp of a boat by his mother, a soldier’s rifle pointing at him, while another soldier scatters belongings from their open suitcase. McMullan tells his unusual autobiography primarily through illustration, the medium he has practiced most of his 80 years. (The text, spare and unemotional, also packs a punch.) He was born in China, the grandson of Irish and English missionaries, where his father worked in the family import/export business. This idyllic and exotic life was upended by World War II, an experience the author does not sugarcoat. The illustrations deal with mature themes, making the format and subject matter somewhat jarring and incongruous, but all the more powerful because of it. 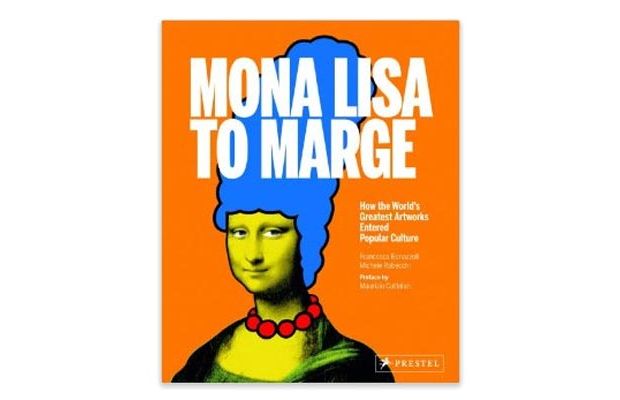 From the title and cover image of a yellow Mona Lisa in Marge Simpson’s blue bouffant hairdo and red pearls, authors Francesca Bonazzoli and Michele Robecchi prove they know their way around their subject — what makes an iconic image, or as the subtitle puts it, “How the World’s Greatest Artworks Entered Popular Culture.” The book explores how 30 original paintings and sculptures  from ancient times to the present (including Michelangelo’s David and Munch’s The Scream) became icons. The authors provide a history of the work and the creator, if known; explain where the piece hangs or is placed; and discuss how it became famous, showing modern adaptations of the work from movie posters, advertisements, cartoons or takeoffs, like the cover itself. The bemused illustrations show how profane these iterations can be, and yet, according to the authors’ convincing story, still be reverential (or at least not detract from the icon’s enduring place in our culture).