A simple, sophisticated Odyssey and A Wrinkle in Time graphic novel

The Odyssey
By Gillian Cross, illustrated  by Neil Packer
(Candlewick, $19.98, ages 8 and up)

Gillian Cross’s lively, simple but sophisticated version of The Odyssey fits well with Neil Packer’s colorful illustrations. The drawings have a Greek aura but a modern sensibility and appealing overall design, whether as full-page illustrations or page-corner eye-catchers.

Ms. Cross portrays monsters such as the Cyclops as natural beings with human traits rather than just as scary ogres. The result is a human tale of sailors forced to fight their way back home in the ancient epic that has spoken to people across the centuries. This version will appeal to readers young and old who can relate to a classic story retold in a human and modern way. 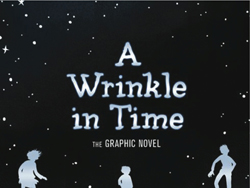 A Wrinkle in Time
By Madeleine L’Engle, adapted by Hope Larson
(Farrar Straus Giroux, $19.98, ages 10 and up)

The appearance of a graphic-novel version of Madeleine L’Engle’s A Wrinkle in Time in no way detracts from the book’s status as a classic, as it has been since it was published 50 years ago, when it won the Newbery Medal.

The time travel of Meg, her young brother Charles Wallace, and the high-school junior she has a crush on, Calvin, to rescue Meg and Charles Wallace’s father was always easy to imagine. Madeleine L’Engle had quite a way with letting the universe and its creatures morph into a phantasmagoria that stretched over a quintet of books, of which A Wrinkle in Time was the first.

Now Hope Larson, an award-winning graphic novelist, has adapted the book as a graphic-novel in a hardback comic format. As with the era when television replaced radio and visuals replaced the imagination that only radio could convey, the graphic novel puts a face to names and a setting to locations that at one time had to be imagined.

Ms. Larson’s adaption makes the characters highly differentiated and appealing, translating to pictures the people and time travel of the novel. It reaches a new generation that might not pick up pure prose but will be drawn into the story, which should not discourage reading the original for a more nuanced and complete view of the characters.