The discovery of Shakespeare's work with handwritten notes by John Milton is called "one of the most important literary discoveries of modern times." You can see it for the next month at the Free Library of Philadelphia.

A book that's been sitting at the Free Library of Philadelphia for 75 years is rocking the literary world this week after two scholars say the collection of Shakespeare's works appears to have been owned by poet John Milton, who made notes throughout.

On Monday, the library put the work, called a first folio, on display in its Rare Book Department for the next month.

The Guardian newspaper broke the news of the discovery Monday, calling it an "astonishing find, which academics say could be one of the most important literary discoveries of modern times."

Check out the hundreds of options in our Field Trip Guide.

The folio has plenty of local ties. It has been at the library since 1945 when the Widener family gave it as a gift arranged by A.S.W. Rosenbach, founder of The Rosenbach Museum and Library in Philadelphia. Its link to Milton, author of Paradise Lost, was prompted by the work of an assistant professor of English at Pennsylvania State University, Clare M.L. Bourne, who has done research on the folio before and recently published an article about the notes throughout it.

That article, and the accompanying photos in particular, got the attention of Jason Scott-Warren at the University of Cambridge in England, who believed the handwriting matched Milton's. Further research and agreement from other experts, led to the groundbreaking announcement. 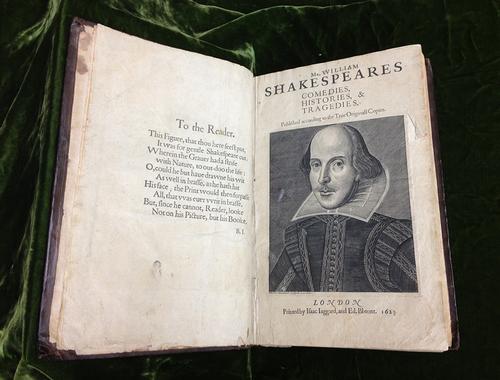 interesting," say Scott-Warren. “It shows you the firsthand encounter between two great writers, which you don’t often get to see, especially in this period. A lot of that kind of evidence is lost, so that’s really exciting.”

While the library has put the folio on display before, as recently as five years ago to mark Shakespeare's 400th birthday, this is the first time it can be viewed by the public knowing the handwritten notes were likely from Milton.

There were 750 first folios of Shakespeare's work printed, credited with preserving some of his plays that might have been lost otherwise. The library says only 235 remain and it has one of about 40 complete copies. It is putting it on display until Oct. 19 along with other items from its collection related to Shakespeare and Milton, including a first edition of his Paradise Lost.

The Rare Book Department (which also has the stuffed bird that inspired Edgar Allan Poe's The Raven, btw) is on the second floor of the Parkway Central Library at 1901 Vine St. and is open from 9am to 5pm Monday through Saturday. There are guided tours of the department at 11am each day.