Mom of Four, Explain Yourself!

With the world population recently reaching the 7 billion mark, I've become a bit paranoid. When I'm out with all four of my kids, people constantly stop me and say things like, "Four? Really?" or "Are they all yours?" and my favorite, "So… are you going to have more?"

There are plenty of families with two and three kids. Just look around… but four? Of course, I never took it personally before. I mean, everyone in my family has four kids! My Dad is one of four, my Mom is one of four. All my aunts have four kids each. I have as many cousins as Ariel has gadgets, gizmos, whozits and whatzits. With the world population announcement, however, I'm constantly feeling as though I have to justify why I have chosen to have a big family.

So, here it goes. Because. There, does that help explain anything? I thought not.

I could say that all my precious babies were all unplanned (which would be true) but all very much loved and adored. I could say that my husband and I never expected to have four children this soon but always wanted a big family (also true). I own my own business and work from home and therefore can take care of such a large horde of children effectively (…now I'm laughing). I won't say any of that, however, as it's really no one's business, is it? I shouldn't have to explain myself. In fact, I want two more kids — at a much later date. So there. 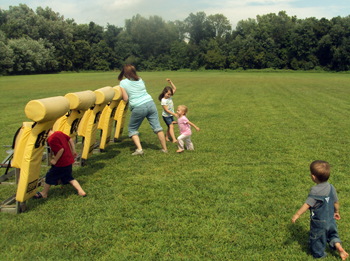 All of the things my children learn now as part of a big family will transfer over to the big world one day. They'll be ready for the world and they'll be better people for having had siblings. It's my biggest hope that they'll be great friends as grown-ups just as they are now and that they'll support each other's journeys through life.

Okay, well maybe I explained myself to the point of tears at this point. I love my big family. What else can I say?