Los Lobos Goes Disney stands tall as a Los Lobos album that will delight all family members and will endure endless plays in the car. The CD opens strongly with “Heigh-Ho” from Snow White with an energetic Spanish-flavored rock treatment. Not until the mid-album “The Tiki Tiki Tiki Room” does the album seem like it’s aimed at kids.

The obscure tune “Ugly Bug Ball” from Summer Magic (first done by Burl Ives) gets a rock makeover with the full horn section that marks a Los Lobos project. “Cruella de Vil” mixes a sweet jazzy tone with a brilliant rhythm section, while the romantic ballad “Belle Notte” from Lady and the Tramp is enhanced by a Latin-flavored string section.

Only the lackluster “Zip-A-Dee-Doo-Dah” disappoints, and that’s so deep in the album that you won’t care, especially when it’s followed by the high-spirited Tejano sounds on “The Bare Necessities.” This is the best cover album of Disney tunes since Stay Awake was released twenty years ago. www.DisneyMusic.com 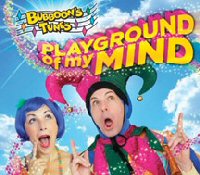 Every year on Kids Corner, young listeners vote for the Top 10 songs of the year. The overwhelming winner for the past six years has been “The Cheese Song” by Bubboon’s Tunes. That’s how long we’ve been waiting for the release of a second CD from this New Jersey-based, theatrically-trained comic duo.

Playground of My Mind sparkles with the same silly humor that first made Bubboon’s Tunes a hit, along with sophisticated production values that move this CD into a new realm. “Worm Collection” laments, “I can’t tell their head from their pooper” while teaching worm facts. “Heavy Machinery” is a love ode to bulldozers, garbage trucks and other gear “workin, workin’ the road.”

You have to love a simple song that manages to work in the word “panache.” This CD uses humor and a child-like approach that will especially appeal to kids under 10. www.bubboon.com