Are the best kids’ books written for kids or written so kids will understand adults better? Having heard someone ask, “The Beatles, wasn’t that Paul McCartney’s first band?” I don’t know how many kids will be familiar with the subject of Fab Four Friends: The Boys Who Became the Beatles (Henry Holt; $17.99; grades 2-5)

On the other hand, author Susanna Reich deserves credit for making Paul’s first band known to a generation that might not be familiar with them. Even the adults who read it will learn what the Beatles’ school days were like in 1950s Liverpool, when old-time British music called skiffle was giving way to rock and roll. The group became friends over their musical passion and confidence, despite adults’ skepticism about a future in the ragtag, chaotic world of teenage music. The author treats the lads with respect and admiration and shows their good-natured determination in the face of troubled backgrounds — McCartney’s and John Lennon’s mothers died early, and Ringo Starr spent many of his teenage years in the hospital. Adam Gustavson’s illustrations reflect the neat, somewhat stiff image of the early Beatles, whose long hair might have been a novelty but whose similar outfits and polished appearance set them apart from their and the world’s later meltdown.

Even if young readers go in having heard of the Beatles, those picking up the alphabet book Alpha (Candlewick Press; $18.99; ages 5-8) will likely have no clue why certain words were chosen to illustrate individual letters. By the second page, though, most adults will know. Bravo! These words are from the official phonetic alphabet, used internationally to distinguish “S” from “F” and all other 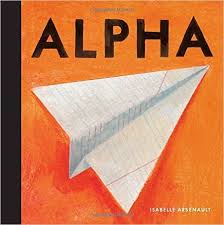 similar-sounding letters when words are being spelled out. The choice of Alpha, Bravo, Charlie, etc., are from the military — NATO to be exact, which itself stands for the North Atlantic Treaty Organization, the collaborative group of West European and American military troops. NATO made the letters’ words official, now known as the International Radio Telephony Spelling Alphabet. Isabelle Arsenault accompanies the words with large, clever, simple, fashionable and distinctly non-military illustrations: The bowler hat for “C, Charlie,” for example, is an association with Charlie Chaplin. There’s also a big-eared ancient phonograph player for “V, Victor” and a stylish high-heel shoe with thin straps for “T, Tango.” 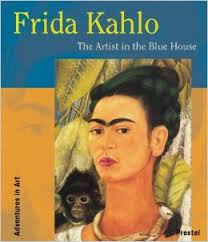 A similarly informative book that will interest young and old alike is Frida Kahlo: The Artist in the Blue House (Prestel; $9.95; grades 4-8). A German museum curator, author Magdalena Holzhey, takes a large-format, varied-typeface approach to make the Mexican artist more user-friendly. But she does not shy awayfrom her subject’s troubled life, including a serious accident that got Kahlo’s art career started when she took up drawing to while away her long convalescence. Troubling images that cascade from the artist are used to illustrate life events in an enlightening biography that also shows how experience correlates directly into art. This book helps make sense of both the artist and the art. 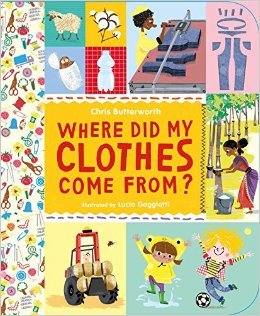 Chris Butterworth starts with a field for cotton and plastic bottles for fleece to provide a no-nonsense and complete explanation of what the title says — where clothes come from, starting with the fibers. The fun is in the detail, as Lucia Gaggiotti’s illustrations follow every stage and show the machines, animals and plants that lead to fiber, loom and cloth cutter for cotton. Fleece orginates from plastic bottles and proceeds to polyester syrup to fiber, loom and brushed hard to make the fluff. Few people know the many steps and often the many countries that make the clothing industry work, here shown for a wide variety of fabrics ancient and modern.