Should You Have BRCA Testing?

It can forecast breast or ovarian cancer risks

BRCA genetic testing made headlines when at age 38 courageous actress Angelina Jolie opted to have an elective double mastectomy and two years later had her ovaries removed, without even having a cancer diagnosis.

Jolie lost eight family members to cancer — including her mom at age 39. Jolie tested positive for a harmful mutation of the BRCA 1 gene, one of two tumor-suppressor genes along with BRCA 2. Certain mutations of these genes drama­tically increase a women’s risk for breast and ovarian cancer.

Typically, there is a 12.5 percent chance that women will develop breast cancer in their lifetime, and there is an even slimmer chance for ovarian cancer, just one percent — unless women carry a harmful mutation of either BRCA gene, says Zohra Ali-Khan Catts, director of cancer genetic counseling at the Helen F. Graham Cancer Center & Research Institute in Newark, DE.

Looking for a way to observe Breast Cancer Awareness Month this October? One answer could be in your bureau.

Four years ago, Margie McClarin, of Horsham, PA, learned she had breast cancer. After this determined mom beat her cancer, McClarin established Beat It Beads, a non-profit organization that creates bracelets bearing the inspirational inscription "Beat It!" 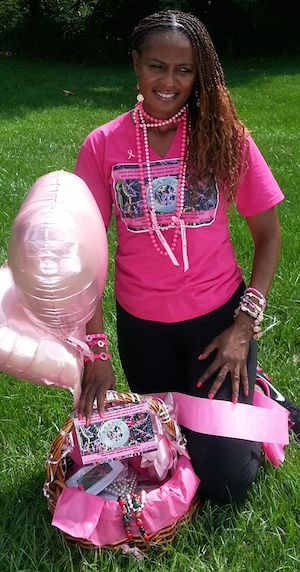 Since its inception, Beat It Beads has donated 3,700 bracelets to cancer patient centers. You can help by donating your time or unwanted jewelry. You'll find details at facebook.com/beatitbeads

When is testing recommended?

Most women don’t need BRCA genetic testing, says gynecologist Vivian Greenberg, MD of Womencare in Abington, PA. But she recommends testing for women in these three categories:
• Women who have a strong family history with two first degree family members, such as a mother and a sister, who have had either breast or ovarian cancer
• Women diagnosed with breast cancer who also have a strong family history, especially pre-menopausal women.
• Any woman who has had ovarian cancer

The BRCA test can be done in a doctor’s office, hospital or clinic from drawn blood or a saliva sample. Genetic counseling before and after testing helps women to understand the benefits, risks and possible outcomes. Knowledge of a harmful BRCA mutation could impact treatment and recommendations for prevention.

Some eligible women choose not to take the test. “It can be overwhelming to have that (BRCA mutation) diagnosis, but I think it can help women with future planning and treatment,” says gynecologist Nana Tchabo, MD of the Atlantic Health System Women’s Cancer Center in Morristown, NJ.

“There is a big psychological issue with what women do with the information,” says Dr. Greenberg, who estimates that one in four patients decline to take the test. A number of patients say, “Not this year. I don’t want to know.”

Nevertheless, Dr. Tchabo recommends that you learn about your family history to determine if you are a candidate for BRCA testing. Knowing the result empowers women to do everything they can to reduce their risk of developing cancer for themselves and their family.

“All patients with ovarian cancer run a 10-15 percent risk of carrying a mutation in the BRCA gene,” says Dr. Tchabo. “That would have ramifications for their breast health, for their children and their siblings, and also for potential treatment options.”

Many women of child bearing age who test positive for a harmful BRCA mutation aren’t ready for or don’t desire to have radical surgery like Jolie. Doctors offer several other risk-reducing options. These measures can also reduce risks for any woman with a family history of breast or ovarian cancer.

More intensive imaging and screening done earlier, more frequently than the general population. This includes clinical breast exams, mammograms, MRIs and trans-vaginal ultrasounds, which can screen for ovarian cancer. The goal is to catch the cancer early when it is most treatable.

Birth control pill. Taken by younger women for 10 years, the pill reduces the risk of ovarian cancer by 50 percent.

Tamoxifen. For older women around age 40, this drug is used for both treatment and prevention of breast cancer.

Knowing the strong odds of developing breast cancer, many women with harmful BRCA mutations do elect to have double mastectomies. Having ovaries and fallopian tubes removed by age 40 significantly reduces the risk of ovarian cancer.

If you know your family history, then you have a much greater chance to reduce your lifetime risk of hereditary cancer.