Science teachers will tell you it’s no hypothesis that students get a real charge out of conducting experiments. A variety of area institutions incorporate the fun of hands-on lab learning into interactive educational assemblies. Whether used to illustrate a specific lesson or anchor a science fair, these programs strengthen students’ interest in an array of scientific subjects by spanning three of the classical elements — earth, water and air.

The Delaware Children’s Museum is teaching pre-K and elementary school students about the world around them with the help of a 19-foot balloon of Earth. This inflatable globe is printed inside and out with the Earth’s features—mountain ranges, rivers, latitude and longitude lines.

According to Jennifer Bush, the museum’s director of education, the balloon is a versatile tool: Not only does it augment geology lessons; it also gives students a leg up on social-studies topics such as geography and map skills.

During the assembly, participating students are allowed to unzip the balloon and step inside the world, where they get an up-close view of the oceans and continents. Delawarechildrensmuseum.org

That old lab standby, the chemical reaction, remains a vital way to teach science. Conducting exothermic and endothermic chemical reactions is the bread-and-butter of Science Explorers, based in Blue Ball, PA. A sample assembly lets kids examine the effects of dry ice through the process of sublimation.

Founder Jennifer “Jupiter Jen” Moorehead says that experiments resulting in changes in color and, sometimes, smell spurs students to want to learn more. Her motto is "If it's not fun, we're not doing it!" Scienceexplorers.com

From the time of Icarus on, flight has consistently captured human imagination. That’s one of the reasons why the Franklin Institute’s flight assembly — just one of many the museum offers — is so popular. During the presentation, “mechanical birds, hot air balloons, gliders and even a rocket launch are used to demonstrate the forces of flight,” says communications manager Sean Tobin. Aviation history and the concept of air pressure are among the topics covered in a gravity-defying way. Www2.fi.edu 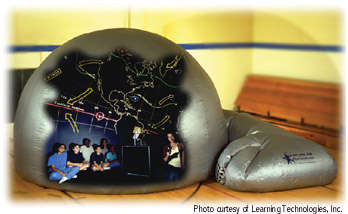 Stars on the Move brings the night sky to schools during the day. The organization projects stars and planets onto the walls of its mobile, inflatable planetarium, teaching students to track constellations, the moon and other orbital bodies in real time. Armed with this knowledge, says company owner Denise Vacca, students can then apply the cosmic information they learn in class to any stargazing they do later in their own backyards. Starsonthemove.com/

Sometimes, weird and wacky is the right educational approach to take. So the Pennington-based Mad Science of West New Jersey deconstructs science in entertaining ways. A favorite assembly of David Whiteman, special event and birthday party coordinator, lets kids build a miniature hot air balloon or hovercraft with their own hands, using a dry cleaner bag and a hot air gun for the former and a light piece of wood and a leaf blower for the latter. Wnj.madscience.org

Tasia Jones wrote this article as a MetroKids intern and communications student at Drexel University.