Is Your Child Ready for the Broad Street Run?

On the first Sunday in May, thousands of runners will race 10 miles down Broad Street, from Central High School to the Navy Yard. If your child wants to participate in the Broad Street Run with its 40,000 participants, it can be difficult to decide whether or not it is healthy and safe for him.

Activities for Kids during the Broad Street Run

Diaper Derby for kids 2 and under
Kids Dashes (distances of 30-50 yards) for ages 3-12
The Fun Miler, a one-mile race for children ages 6-12
Entertainment: face painting, caricatures, inflatables, balloon artists and a petting zoo

“There’s no clear cut answer,” says Trina Lisko, DO, a physician at South Jersey Sports Medicine Center in Cherry Hill, NJ. Each child must be considered individually, she says. “We don’t have any research that says running for kids is bad,” says Lisko.

However, she acknowledges that there is still a lot of disagreement in the medical community. While some conservative doctors say kids should not run a race longer than a 10K (6.2 miles), the American Academy of Pediatrics says that as long as a child enjoys running and is injury free, she should be allowed to run distances as long as the marathon (26.2 miles).

“Some middle school kids could handle it,” says Jeff Long, president and founder of the Healthy Kids Running Series based in Thornton, PA, of racing the Broad Street Run. “But many are not putting in the effort to train and be prepared for it,” he says. “It’s asking a lot for kids to put their bodies through that,” he adds.

“The tricky thing with kids is that they’re always growing,” says Jessica Laniak, sports physical therapist at Nemours Center for Sports Medicine in Wilmington, DE. “We do see a lot of overuse injuries when kids are going through growth spurts,” she says. 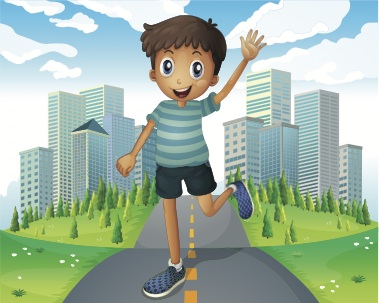 “They were really tickled with themselves,” says Tara Wilcox, of Radnor, PA, of her kids’ sense of pride after her two middle schoolers ran the Broad Street Run last year. “It was a very positive experience,” agrees Amanda Magen, Wilcox’s daughter, now in 9th grade at Radnor High School. “I learned about how I could dig deep,” she says.

“We wouldn’t recommend going out there to run without an adult saying they’re ready,” cautions Kobylarz. If they’re not ready, you have to say wait until next year, she says.

In addition to overuse injuries, experts worry about psychological burnout for young athletes. The American Academy of Pediatrics recommends that children should have at least one to two days off per week from training and racing. The AAP also suggests that the progression of training intensity, time and distance should only increase by 10% each week.

“The Broad Street Run shouldn’t be their first race,” advises Laniak. She recommends trying a 5K or a 10K first to see how  your child’s body responds.

Dr. Lisko advises that parents choose a running shoe for kids with shock absorption to reduce the stress on growing bones and have their child work with an experienced runner to help with running form, training advice and pacing strategies. “If they are having any pain, they need to stop,” she cautions.

“We don’t want to discourage kids from running” says Dr. Lisko, who acknowledges that many kids have successfully run further than 10 miles. “If a kid is interested in running, I say ‘OK, but under guidance.’”