15 diseases and cancers can cause the digital picture reflection.

In family photos, have you ever noticed a golden glow in your child’s eye?

California mom Megan Webber saw just that in shots of her 5-year-old son, Benjamin. Based on what she discovered, she’s sharing her family’s story in a campaign called Know the Glow.

When Webber downloaded family photos from her digital camera, she found the usual problems that need touching up. Some shots of Benjamin showed a golden glow in his left eye.

“Benjamin has always had a freckle in his left eye,” Webber says, “so I thought the flash was just a difference due to the coloring of his eye and ignored it — I even did red-eye correction to remove it from photos.”

But when her sister noticed that same glow in some family vacation pictures she had taken, she gave Megan a concerned call. “She had seen on a television show that this could be a sign of a tumor in the eye and recommended I have him seen,” she recalls. 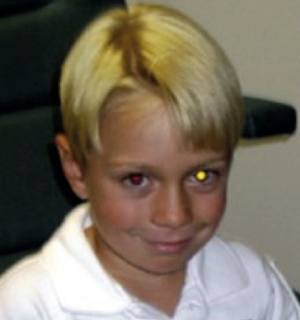 Benjamin’s pediatrician sent the Webbers to a specialist who urged them to come in right away. They were stunned to learn Benjamin was legally blind in his left eye.

“He’d never bumped into walls or rubbed his eyes — he’d even just passed the paddle eye test in the doctor’s office,” Webber says. “His left eye could not see a letter ‘E’ the size of a full computer screen eight feet away.”

Scans of his eye showed a white mass, which had been causing the reflection in the photograph. More tests revealed that Benjamin had Coats’ disease, a life-long disease that can damage the eye to the point where eye removal is necessary.

Facts about ‘The Glow’

One child in 80 is at risk of getting “The Glow.” And when it comes to Coats’ disease and retinoblastoma (another disorder it often may indicate), 80% of cases are initially diagnosed by a parent via a photograph, according to the campaign.

“The Glow” is an indicator of 15 eye diseases and cancers. In some cases, it can lead to the removal of the eye, blindness and in extreme cases, death.

If you believe you have seen a glow, you should obtain a referral immediately to a pediatric ophthalmologist for diagnosis and treatment.

Fortunately, 80% of childhood blindness is preventable. And Benjamin’s problem was caught early enough for treatment.

“While Benjamin has had three eye surgeries, we were very lucky to have caught his disease in time,” says Webber. “Had it been more advanced, Ben could have immediately lost his eye.”

“Had I known about the glow earlier, we could have saved more of Ben’s vision,” she adds. “I don’t want another parent to have to suffer through that feeling — or other children to needlessly lose their sight or their eyes due to a lack of awareness of the glow!”