Theatres feel like home to me. I was a musical geek growing up, in show after show, preferably ones that involved tap dancing. In college, I moonlighted in the box office and backstage of a storied little Boston theatre. Just weeks after I graduated, I was lucky to land my very first job at Playbill magazine, putting together Broadway and Off-Broadway programs and seeing tons of amazing productions. Since then, life and motherhood have lessened the frequency of my theatregoing but not my passion for the art form. (Don't look at my iPod if you don't like show tunes!)

So when I got the opportunity to tour Philadelphia's venerable Walnut Street Theatre last week and learn about its children's programming (and more), I jumped at the chance.

Walnut Street is the country's oldest theatre, having opened in 1809 with a performance of a comedy of manners, The Rivals; Thomas Jefferson, then president, was in the audience with the Marquis de Lafayette. The theatre building is packed with portraits, statues and artifacts showing its history, which encompasses actor's actor Edwin Forrest, the Booth brothers (actor Edwin, named for Forrest, and John Wilkes, who came by his fame in more sinister fashion), involvement in a Shakespeare riot, world premieres of now classics A Raisin in the Sun and The Diary of Anne Frank, and appearances by everyone from the Barrymores to Brando, Helen Hayes to both Hepburns (Katharine and Audrey). The actors' photo gallery in the mezzanine lobby (at right) pays pictorial tribute to those who trod the boards here. 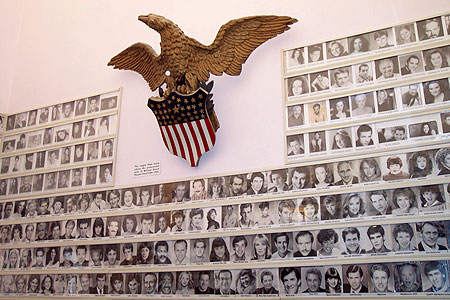 As much as the building itself honors the theatre's history, the staff keeps its eye firmly on the future, cultivating young talent year-round. Walnut Street's school and camp educates 1,200 area kids each year, and star students are often cast in mainstage and children's productions. (Look for future headliners during the holiday season in both Elf and A Christmas Carol). Indeed, one former Camp Walnut actress is right now making her Broadway debut in the current Annie revival.

Past acting classes, Walnut Street partners with area schools dealing with damaging arts and music budget cuts as well as special needs schools, with programs that have encouraged several students to speak or sing for the very first time. A touring company brings anti-bullying and self-esteem assemblies into schools. And, of course, the Theatre for Kids series is a standout in the city. Of the 2,200 subscriptions Walnut Street makes available for the kids' series, only 100 are left for the current season. The shows are based on beloved kids' books — this season brings not only a full-scale production of Seussical Jr. but also Alexander Who's Not Not Not Not Not Not Going to Move, Pinkalicious the Musical and The Monster Who Ate My Peas. Tickets are priced at an affordable $8.50 to $16, a range that allows many grandparents on fixed incomes to introduce theatre to their grandchildren, And once that happens, says my charismatic tour guide Ralph Weeks, those kids come back time and again.

No tour of a theatre is complete without a stop on the stage. I got to take a bow on the very boards where the first ever curtain call was (scandalously) stolen and see some prep for the upcoming production of the Tony-winning In the Heights, including a peek into a rehearsal room. (In the Heights, by the way, is a great starter musical for kids because of its optimistic, American Dream theme and fantastic score that melds traditional musical tunage with hip-hop and Latin rhythms.) The Walnut Street's stage is quite small, and because of the historic nature of the building, renovations are out of the question. So the scenery must be cannily designed to fit not only the mainstage production but also collapse enough to accommodate the shows in the kids' series, which are presented in front of whatever the current set is.

I could go on and on, but here are some quick takes from my tour of the Walnut Street Theatre:

Special thanks to Ralph and his colleague Jen for showing me around. I can't wait to see what the Walnut Street does next.

The Walnut Street Theatre's located at 825 Walnut St. This season's mainstage shows include In the Heights, Elf, Other Desert Cities, Arsenic and Old Lace and How to Succeed in Business Without Really Trying. In its smaller, often more exploratory Independence Studio, you can see Sophie Tucker: The Last of the Red Hot Mamas, Driving Miss Daisy, Beautiful Boy, The Rise and Fall of Little Voice and I Love You, You're Perfect, Now Change.