Elmo Has Left The Building

I daresay that Elmo is very possibly the most annoying character in children’s entertainment today.  Do I hear an Amen?

There is this most annoying toy that my children love. (Why don’t they ever fall in love with the quiet toys?) It’s a little hand-held “See N Say” toy that sings the Elmo theme song. You know the one I’m talking about — La-la-la-la!  La-la-la-la!  Elmo’s World!

The sad part is, I have only myself to blame. Yes, I bought this toy and brought it into our home and gave it to my youngest daughter in her Easter basket last spring. I have regretted that purchase ever since. I never imagined that all three of my children would find this toy so highly entertaining, and hardly a day goes by that I am not tortured with that high-pitched voice owned by none other than America’s favorite muppet.

Hardly a day goes by that I am not tortured with that high-pitched voice.

I finally had my fill of this irritating toy and decided it was time to put Elmo out to pasture.  So one afternoon in a fit of impatience, while the children were in another room unaware of the fate becoming their beloved Elmo, I tossed him in the kitchen trashcan. The lid made a satisfying snap of finality as it closed with Elmo inside, and I smiled smugly as I anticipated my glorious Elmo-free days and weeks ahead.

I went back to making dinner, and a few minutes later I paused to step on the pedal that opens the lid of the trashcan and tossed in an empty tomato sauce can.

Thud. (The can hit the refuse in the top of the trashbag.)

Snap.  (The lid of the trashcan snapped shut.)

The toy is haunted, I swear.

I giggled to myself at the irony of my attempt to rid our home of the offending muppet and continued with my chopping. Soon Elmo was forgotten. I finished dinner preparations and left the kitchen.

A few minutes later I returned to set the table and absentmindedly tossed a few pieces of junk mail into the trashcan.

Too late. My 2-year-old appeared from around the corner.

“Melmo?” she inquired, looking up at me with trusting blue eyes.

“Um. Yeah. Go look in the toy box.” I silently asked forgiveness for my deceit as she toddled out of the kitchen and into the playroom in search of the elusive Elmo.

Furtively, I grabbed the trashbag out of the trashcan, tied it up, and hauled it out to the laundry room before one of my older children happened by. They wouldn’t be as easily distracted.

As I dropped the trashbag on the laundry room floor and went to close the door, I heard a muffled, La-la-la-la!  La-la-la-la!  Elmo’s World! from behind the closed door.

I stifled another giggle and skittered back to the kitchen to put a fresh garbage bag into the trashcan and set the table for dinner.

Later that night, I was in the laundry room folding clothes when Husband came in to take out the garbage. He picked up the trashbag and once again we were afflicted by Elmo’s serenade.

Husband looked quizzically at the bag and then to me. 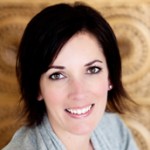 “Don’t even ask,” I responded dryly.

I am pleased to report that’s the last we’ve heard from Elmo.

Jo-Lynne Shane is a mom of three from Chester County, PA. This post was adopted from her blog, Musings of a Housewife.