Do women stereotype moms? Are we gender profiling ourselves?

Moms, how stereotyped have we become? Is it just assumed that because we have children with us that we stay at home? I know we’ve all heard the “stay home and eat bonbons” line, but is that still something people just assume to be true? I’m pretty sure that if you’re reading this, you’ll agree that it’s not.

Have I been gender profiled?

While enjoying a gorgeous day this weekend, I took Big and Little to the local Restaurant Festival in our town. Filling over 5 city blocks, this annual event is packed full of every snack, lunch, dinner and drink entree available. A few tastes and my kids were parched, crowded and antsy for some kid fun.

We made it down a side street where local non-food booths were set for local businesses and organizations. While I chatted with a neighbor, they happily found cups of Lemonade from Alex’s Lemonade Stand.

Neighborly, I grabbed a few dollars to donate and dropped them into the collection.

While the kids drank their lemonade, I waited, quietly.

A man came over, dropped a dollar donation, took a lemonade, and was asked for a business card.

“A business card?” he questioned.

“Well, sure,” one of the ladies hosting the booth responded. “We’re collecting business cards to enter you to win an iPad from our sponsor. Do you have one? If not, we can take your office contact information on our form.”

I stood, watching as this gentleman pulled out his business card and dropped it into the bowl for the sponsor: a printing service. I shifted, feeling my brand new clutch under my arm. Packed with only four items: wallet, lipstick, iPhone and business card case.

Is it because I was with my children that it was assumed I wouldn’t have a business card?

I moved the clutch from one hand to the other. I fumbled with the fastener. I read and re-read the signage.

As my children finished their drinks, the man walked away. I stared at the fishbowl collection, wondering the ratio of women’s business cards to men’s.

And we walked away.

Over the past 30 hours, I’ve replayed the scene in my head. I’ve shared it on twitter. And I’ve become more and more upset. I’m a mom, yes. Most certainly. But I’m also a business woman. I have a need for print services. I have an interest in winning an iPad.

Is it because I was with my children that it was assumed I wouldn’t have a business card? Was I excluded from participating because I’m a woman or a mom? If the man had children with him, would he have been asked for a card?

Should I have said anything?

I’m thinking, yes. A calm “oh, I have a business card” would have been fine.

But, as usual, I remained quiet. I let the world affect me. 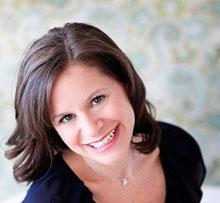 But more than anything, I'm angry that I let them know how very wrong they were, in sugary-sweet way that made them think.