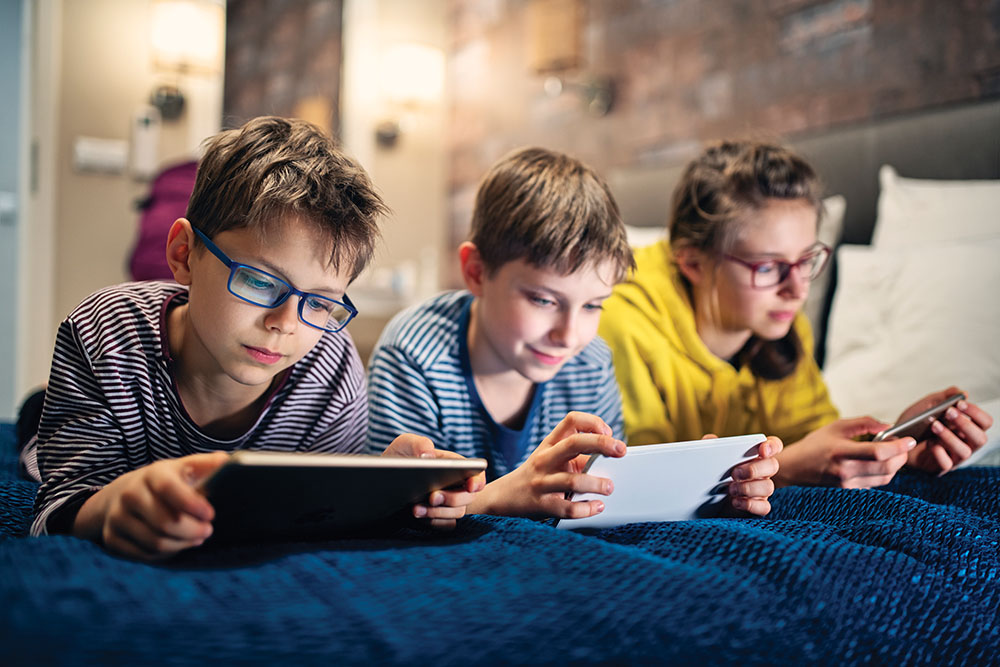 Kids today are growing up in an age defined by access to the internet, online devices and an increasingly connected world through social media.

Parents navigating this world must make difficult decisions about what online activity to allow their child to partake in and how to protect children from the not-so-great parts of the web.

The overabundance of digital media raises questions regarding children’s mental health. In what’s proving to be a turbulent time for in-person social activity, what, if any, concerns should parents have about their child’s increasing screen time?

“I think we’re starting to appreciate even more how central mental health is as a part of physical health,” says Dr. Tamar Mendelson, director of the Center for Adolescent Health at the Johns Hopkins Bloomberg School of Public Health. Mendelson stresses the importance of developing healthy mental habits at a young age.

Dr. Eric Li, Physician Fellow in the Department of Child and Adolescent Psychiatry at Children’s Hospital of Philadelphia, adds, “Kids are developing. Our brains continue to develop into our mid-20s, and it’s a very sensitive time … where our habits are formed. This is where we make our friend groups (and) where we develop our identities. We make a lot of our future decisions before we’re mature enough to understand what we’re deciding.”

Given this critical time for growth and development, children need to have support, including access to mental health awareness resources.

According to the Centers for Disease Control and Prevention, American children ages 8 to 10 now spend approximately six hours a day in front of a screen consuming entertainment media. This number increases to nine hours for children ages 11 to 14 and 7 ½ hours for ages 15 to 18.

“I think there’s a lot of controversy about how screen time and digital technology impact mental health, and there are a range of views … with some educators, families and researchers believing it’s important to limit screen time pretty strictly and others seeing more benefits …” observes Mendelson.

Referencing the skyrocketing screen usage data (especially post-pandemic), she notes, “On the one hand, these numbers are alarming, but on the other hand, I think what also emerges is that it’s more important what kids are doing on screens than the amount of hours … it’s not a one-size-fits-all situation.”

Dr. Daniel S. Pine, a psychiatrist at The Ross Center, observed the following in the organization’s “Screen Time & Mental Health in Children and Teens” webinar: “We think of associations with screen time and problematic screen time as more of an expression of a problem that a child is already having, as opposed to a cause or risk factor. There is tremendous diversity in terms of the kind of media exposure that children have, and this is shaped by unique aspects of their background and the treatment setting in which they’re seen.”

Longitudinal studies, he explains, suggest that in a vacuum, screen time on its own is not necessarily a strong risk factor for children.

During the same webinar, Adam Pletter, a child psychologist in Bethesda, Maryland, explained the causes behind a child’s potential problematic screen usage. Possessing a brain that hasn’t fully developed its braking and regulatory system, having a brain with an overactive emotional center and being able to access unlimited content tailored to individual interests can combine to make it hard for children to resist the allure of media on their devices. These elements can possibly introduce regulatory issues, such as inability to keep track of time online.

“The internet has changed a lot,” Li acknowledges. “It’s a double-edged sword. It has improved the quality of life. It’s leveled the playing field, and it’s brought a lot of resources that are very accessible. But there’s a lot of downsides to it.” He references the “fear of missing out,” where adolescents — and adults — constantly see what others have — and it’s difficult not to want the same.

Judging the effects of social media overall is difficult. For example, Li recalls studies that considered the difference between “lurkers” — those who watch and read but don’t post — versus active social media users. Association does not equal causation. “Lurkers” are “more likely associated with depression, anxiety and all those negative outcomes,” whereas people who actively post on social media are more likely to have more positive associations with content.

Mendelson adds that the ideal of “perfection” often promoted across social media “can be really detrimental for self-image … seeing what seems like all these perfect bodies, perfect lives.” In addition, children may come across content that they’re not ready for — whether it’s sexual, violent or simply disturbing in nature.

But not all uses of social media are bad. “I do think it’s a great way for kids to connect with their friends,” says Mendelson, noting that the communication facilitated via the internet —whether on social media, gaming or FaceTime — is positive.

Li agrees that social support groups are a great benefit of the internet, especially for shy kids. “It’s a good outlet for people who have a hard time finding people with the same interests or who have difficulty expressing their thoughts and words.”

“(Mental health) is something parents and families can nurture in their kids starting from a young age. The single most robust predictor of mental health for kids is unconditionally loving adults — that’s a really good place to start,” remarks Mendelson. She encourages parents to get involved in a child’s online activity. Teach them digital literacy: What’s appropriate to post online? What sites shouldn’t you visit? How do people try to ask for photos or inappropriate information from you? How can something live forever on the internet?

Pletter advises parents to “lead with empathy.” Talk with children about technology. Learn about their experiences to get a reference point for this digital generation. He recommends placing parental controls on devices to create conversation between parent and child.

Li’s top advice for parents is to be a good role model.

“If you want your child to not use the phone at the dinner table, you probably shouldn’t use it” at the table. He also advises that parents take an active role in sharing the internet with their children, noting that co-viewing or consuming media with your child from the moment children are introduced to screens is the best way to go about understanding what children are doing online. Common consensus suggests that parents wait until children are about 18 to 24 months old.

Dr. Aateqa Ismail, attending psychiatrist at Children’s Hospital of Philadelphia, adds that family rules and conditions for technology usage should be set before giving children technology.

Parents can also look after their children’s mental health by maintaining regular bedtimes, family mealtimes and exercise, adds Mendelson, in addition to facilitating healthy communication. “The more that communication is the norm in a family,” she says, “the more it can happen easily around social media or mental health.”