By now, most parents have heard of Snapchat, the phenomenally popular new messaging app that allows users to annotate and send photos and very short videos to their friends. Unlike other messages, Snapchats are supposed to disappear in ten seconds.

Kids who are tired of having their lives searched and analyzed on Facebook love that spontaneity. As one college blogger put it, Snapchat is fun “without the terrifying permanence of the rest of our technology.”

In one way, this is good news for parents who have been trying to convince kids to be discrete about what they post on Facebook, Twitter and other social networking sites. Most young people are keenly aware that Facebook can be reviewed by everyone from romantic partners to college admissions officers, employers and even law enforcement.

Most of the 5 million messages being sent everyday on Snapchat are not sexual. Instead, they are quirky, momentary impressions of things the sender finds goofy, funny or touching. Sharing these tidbits with friends does deepen relationships. The youthful founders of Snapchat seem wise beyond their years when they write: “There is value in the ephemeral. Great conversations are magical… because they are shared, enjoyed, but not saved.” 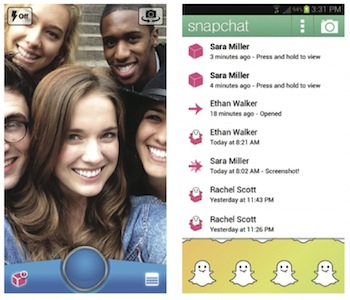 The same thing could be said about romance and even sex. And that’s why Snapchat creates concerns for adults who can easily imagine impulsive teens using the service to send provocative or even obscene pictures of themselves.

Parents need to take a deep breath. Despite media attention to the subject, sexting is not rampant among teenagers. A University of New Hampshire  research study found that among children 10 to 17, only 1% had shared explicit images of themselves or others, and only 7% had received such an image.

What we can do

A good strategy is to help children think through the rewards and risks of Snapchat and its competitors.

Ask. Download the program so you understand how it works. Then ask your child about his experiences. Are the kids at school using the app? What kind of photos does your child like to send? What kind  of images has he received? Is the self-destruct feature exciting or annoying?

Encourage. There are many creative and constructive ways to use Snapchat.

As described on the Snapchat website, “We believe in sharing authentic moments with friends…Sometimes it’s an inside joke, a silly face or greetings from a pet fish.”

Inform. Be sure your child understands that anything digital can be replicated. The recipient of a message can capture the screen shot (see photo, left) or use another camera to surreptitiously capture an image.

Sending another person a photo of private parts is always ill-advised. There is no such thing as “safe sext.”

Enforce. If you didn’t make rules when you gave your child a cellphone, now is a good time to be very clear about acceptable and unacceptable use.

Parents can provide the information and structure that allows kids to harness the potential of Snapchat without stumbling into its pitfalls.

Carolyn Jabs is a freelance writer specializing in family technology.