ASAP has provided after-school activities for more than 60,000 students.

Since 2002, After School Activities Partnerships (ASAP) has provided out-of-school programming in Philadelphia for kids K-12 inspired by its slogan “What happens after graduation starts with what happens after school.”

Activities that include chess, debate and drama, are held in schools and recreation centers during the school year and summer to help children create friendships, develop new interests, and learn new skills.

Its Philly Girls Play Chess program started in 2008 and has served over 5,000 girls since. For its fourth year,  their free camp ran from July 22-26 where beginners learned the basics while advanced players improved their tactics. 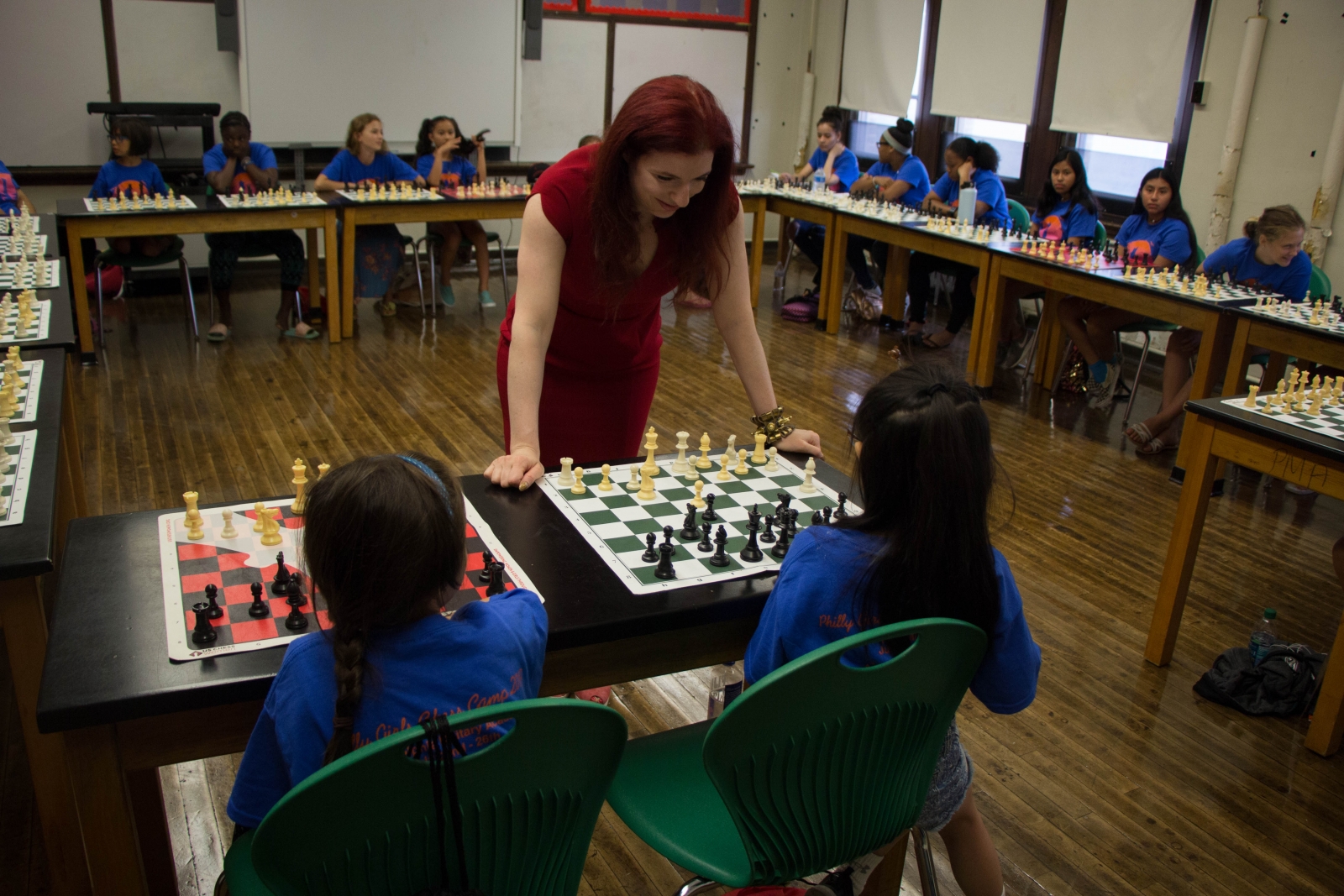 A camp-goer competes alongside other children against chess master Jennifer Shahade during the ASAP Philly Girls Play Chess Summer Chess Camp at the Philadelphia Military Academy on July 23, 2019. (Photo by Colleen Claggett)

At one of the sessions, two-time US women’s chess champion Jennifer Shahade challenged the girls to a simultaneous exhibition, or simul, where she played all 32 of them at once. Within seconds, the girls had to quizzically assess their boards before Shahade delivered the next move. Each time she came over, you could see the rush of excitement on their faces. Although no one defeated the grandmaster, the game encouraged them to improve their skills.

When kids have a passion and put in their all, it can reflect positively on other parts of their lives.

ASAP summer camps have ended for this year, but visit ASAP’s website to find a location or events for the upcoming 2019-2020 school year.

“I feel like a lot of my female friends wanted to learn to play chess but never did, so I get to show it to them. I feel so good whenever I do that because I love introducing people to new things, ” says 12-year-old Marissa, who has played for six years.

ASAP started with a mission to keep children active during after-school hours, a time where kids are vulnerable to violence or substance abuse. ASAP has combated that by serving over 60,000 children with free activities in every Philadelphia zip code and almost every public school. To ensure inclusivity, they offer some programs in different languages and at sites near public transportation or with accessible entrances. 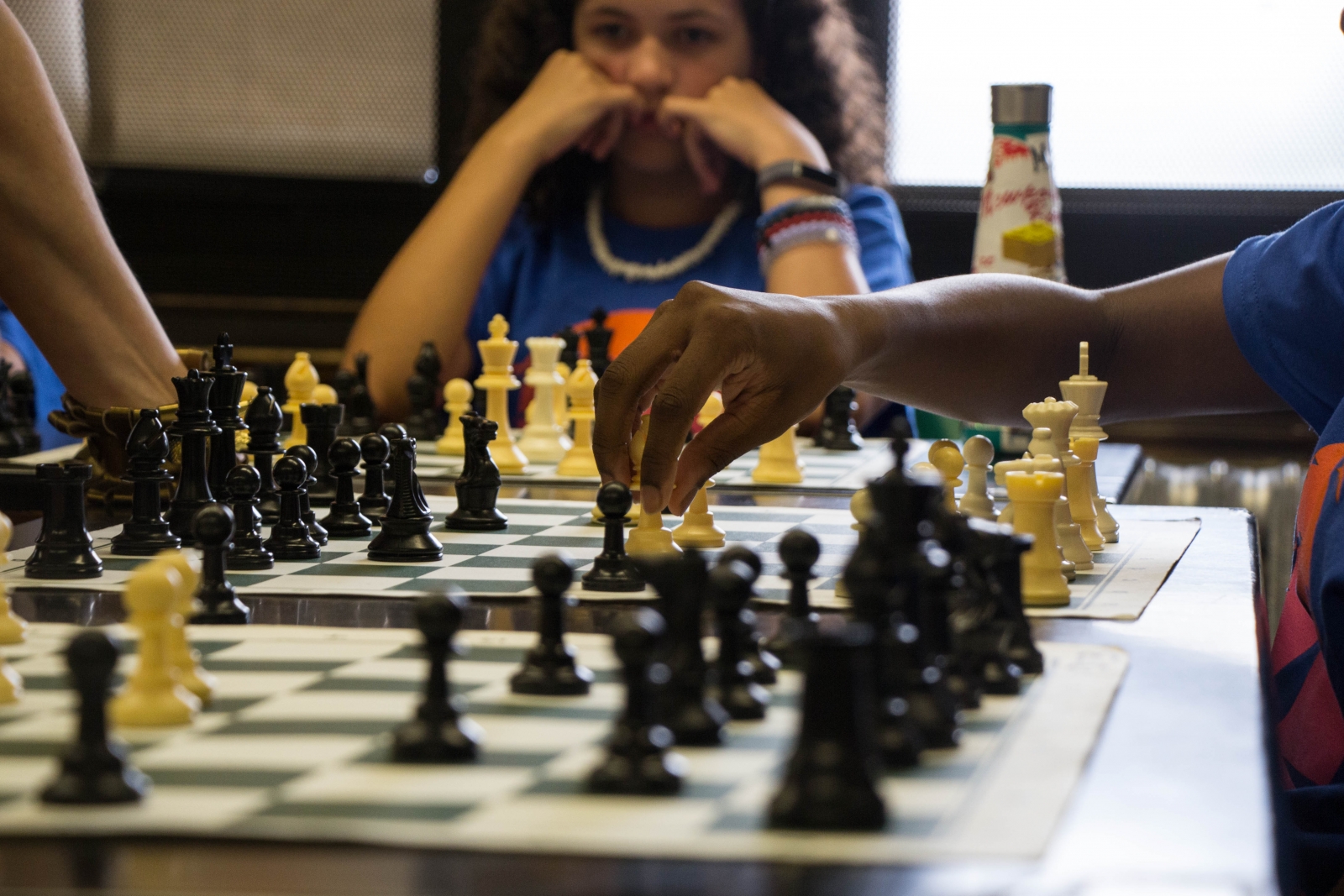 A camp makes a move in a match against chess master Jennifer Shahade during the ASAP Philly Girls Play Chess Summer Chess Camp at the Philadelphia Military Academy on July 23, 2019. (Photo by Colleen Claggett)

Participation in these experiences has lead to improvements in academics, attendance, behavior, and overall sense of belonging. “From surveys that we administer, students that attended our camp reported that they felt a higher sense of self-efficacy, sense of belonging, and grit,” says Director of Chess Programs Martin Collette. These programs provide resources to those who may not have an opportunity otherwise.

“I don’t play chess at school and I don’t have a chess board at home, so I play at the library,” says 10-year-old Philly Girls Play Chess camper Ariana.

For many families, ASAP provides more than after school activities. “They’re like a second family,” says To-Lam H., parent of two children in the chess program.