A study published in the journal Pediatrics has raised new concerns about a link between organophosphate pesticides — frequently used on berries, celery and other produce — and attention deficit/hyperactivity disorder (ADHD) in children.

The study of 1,139 U.S. children age 8-15 showed that the higher the level of organophosphate exposure, as measured in urine samples, the more likely the children were to have ADHD.

How To Wash
Fruit and Vegetables

MetroKids nutrition writer Althea Zanecosky offers this advice on how to wash fruits and vegetables:

According to the U.S. Food and Drug Administration (FDA), you should wash raw fruits and vegetables very well before you peel, cut, eat or cook with them. Here are tips on washing fresh produce:

Before working with any foods, hands should be washed with soap and water. Also, make sure preparation areas are clean and sanitary.

Under clean, running water, rub fruits and vegetables briskly with your hands to remove dirt and surface microorganisms.

Wash produce just before serving — not before storing, as washing will cause produce to spoil faster.

Produce with a firm skin or hard rind like carrots, potatoes, melons or squash may be scrubbed with a vegetable brush and water.

Discard the outer leaves of leafy vegetables such as lettuce and cabbage before washing.

Always wash squash and melons, even if you don’t eat the rind or skin because when cut, dirt or bacteria that is on the outer surface can be transferred to the inner flesh.

Baking soda: Baking soda may leave behind sodium which may affect the flavor of the produce. Baking soda and water mixtures vary greatly in cleaning ability.

Chlorine Bleach: There are times when using chlorine bleach (for example, after flooding) is recommended to clean fruits and vegetables but only when advised by health authorities. Mixtures of chlorine bleach and water should be avoided on food because they may be toxic if too concentrated and may alter the taste of the produce.

Click here for more produce safety advice from the FDA.

What Does It Mean?

The major source of exposure to pesticides for infants and children is the diet, according to National Academy of Sciences research. Many fruits and vegetables are known to contain pesticide residue. The study did not, however, track which foods each tested child ate.

The study did not conclusively show that pesticides cause ADHD, but rather, it supports “the hypothesis that organophosphate exposure, at levels common among US children, may contribute to ADHD prevalence. Prospective studies are needed to establish whether this association is causal.”  In other words, the authors could not say for sure that pesticides, found in urine samples they took, actually caused ADHD symptoms.

Of the children tested, the researchers found that 119 (about 10 percent) met the diagnostic criteria for ADHD. In particular, children whose urine samples had higher-than-average levels of the chemical dimethyl thiophosphate, which is associated with pesticides, had twice the odds of having ADHD symptoms compared with children with undetectable levels of the chemical.

The study’s lead author, Maryse Bouchard, PhD, says organophosphates kill pests by acting on a set of brain chemicals closely related to those involved in ADHD, “so it seems plausible that exposure to organophosphates could be associated with ADHD-like symptoms.”

The exact cause of ADHD is not known. According to the Mayo Clinic, genetic factors play a role; about one in four children with ADHD has a relative with the disorder. Pregnant women who smoke, use alcohol or drugs, or are exposed to environmental poisons such as PCBs are at greater risk of having children with ADHD. Children exposed to toxins such as lead or PCBs are at greater risk of developing ADHD. Differences in brain structure and activity have been identified in kids with the disorder.

What Actions Can You Take?

Dr. Bouchard advises parents to avoid using bug sprays in the home and to buy organically grown fruits and vegetables.

Food washing might only partially address the problem. Before testing foods for its annual Pesticide Data Program, the U.S. Department of Agriculture washes or peels fruits and vegetables — yet it still detects some amounts of pesticides in some samples.

“Even after a thorough wash, residues from pesticides still remain,” says Alex Formuzis, a spokesman for the Environmental Working Group (EWG), a nonprofit watchdog organization that studies pesticides. Food industry and government agencies contend these amounts are not harmful.

"Buying local" might not address the pesticides issue. Food from local farms has both health and environmental benefits, but it is not necessarily grown without the use of pesticides. When buying at a farmer’s market or from a local cooperative, consumers can  inquire about pesticide use.

Organic foods are grown with few or no pesticides, but usually cost more and can be flawed because of insect attacks. The EWG publishes a list of the “Dirty Dozen” and the “Clean 15,” fruits and vegetables with highest and lowest amounts of pesticides as reported by the USDA. (See illustration.) 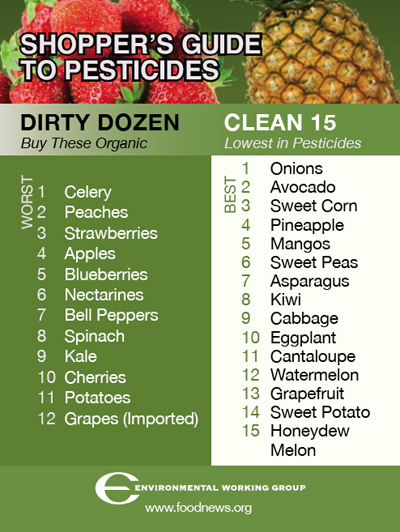 Still, says Formuziss, "If conventionally grown produce is the only kind you have access to, eat fruits and vegetables. The benefits far outweigh the risks from pesticides."