A Trip to the Delaware State Fair; Annapolis, MD, and the US Naval Academy

Combine a family trip to the Delaware State Fair with a visit to Annapolis, where you can tour the U.S. Naval Academy.

The Delaware State Fair is celebrating its 100th birthday this year. If you are a Delawarean, you may have been to the fairgrounds in Harrington, in the central part of the state, at least once for the carnival rides, farm animals and carnival food.

But if you're from Pennsylvania or South Jersey, you might wonder what the fuss is about.

GMC provided us with a 2019 Terrain and accommodations for this trip in exchange for us providing you feedback on its Terrain Black Edition SUV.

While Jersey has its own state fair, in fact two, both are upstate, in Sussex County and at the Meadowlands. Surprisingly, Pennsylvania does not have a state fair. This is odd for a place so well known for its farming culture, from the horses of Chester County to the huge fields of crops and dairy cows raised by the Amish and others in Lancaster and York counties.

Pennsylvania does have dozens of county fairs, frequently tied to the local 4-H and county extension services. And its annual farm show in Harrisburg each January is as big an agricultural tradition as exists anywhere in the country.

But a state fair, with amusement rides, concerts and a demolition derby? No, Pennsylvania doesn't have that. So maybe take the drive down the Delaware this year and discover what a state fair is like.

What's at the fair?

The first weekend of the fair this year was brutally hot, but now that the heat wave has broken, you have until Saturday (July 27) to enjoy the rides, animals and agricultural displays without too much of a sweat. The kids will love the carnival atmosphere with a midway that includes games, every fried food you can imagine and a couple you couldn't, thrill rides and animal entertainment that includes pig races, a giraffe menagerie and a camel show, as well as a circus.

But you should also take the kids to see the farm animals kept in the large, permanent pavilions to the right of the midway behind 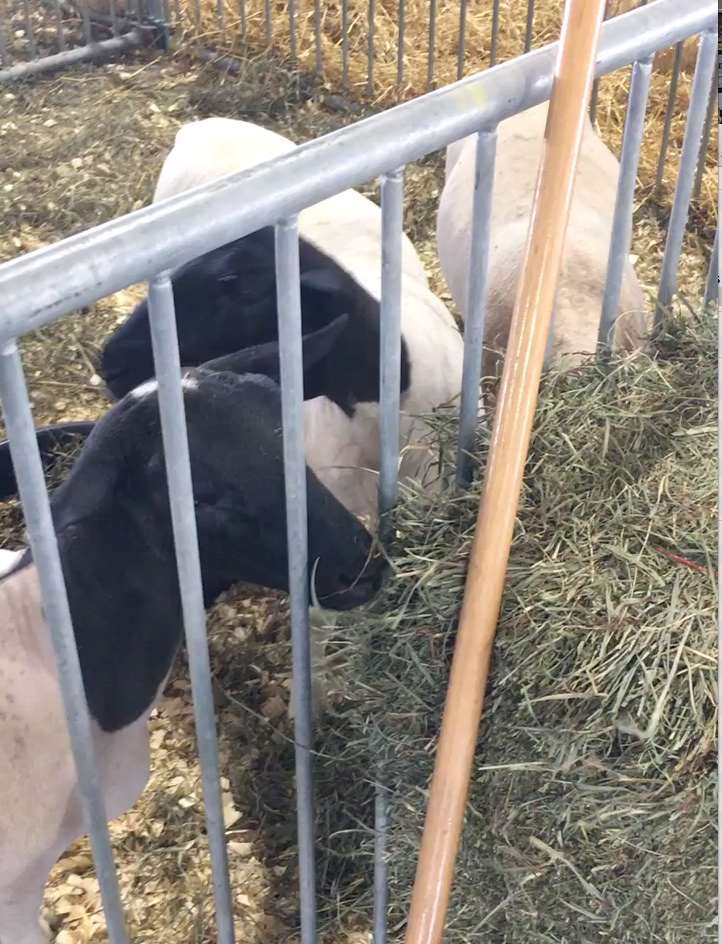 the food stands. There they will find the sheep, pigs, goats and other animals that kids from across the First State have brought to show off and compete for prizes. Often, the young farmers are near their animals, so you can ask them questions.

Toward the back of the fair there is an air-conditioned building housing the fruits, vegetables, crafts, photography and other projects that were judged and awarded ribbons earlier in the fair. Aside from a cool break from the weather, it's another chance to talk to exhibitors about their hobbies and maybe get your kids interested in a new craft or gardening pursuit.

After you've made those trips to the historical heart of the fair, you can start back up the midway through the colorful, flashing food stands. Whether your kids opt to eat before or after they go on the rides will depend on how wild the ride and how strong the stomach.

The carnival (and carnival food) portions of the Delaware State Fair are much larger than your typical church or community carnival, so even bigger kids will find rides exciting enough for them. There are also concerts each night, although tickets must be purchased separately.

Side trip to Annapolis and US Naval Academy

If you've driven two hours to get to the Delaware State Fair and spent a few hours walking, spinning and eating your way through it, another two-hour drive home might not seem like much fun. If you head an hour east, you will be at the Delaware beaches, where you can spend the night and relax on the sand the next day. Or you can head an hour west to Annapolis, MD, a charming small town that's filled with history, a walkable downtown filled with restaurants, souvenir and ice cream shops, and is home to the United States Naval Academy, which welcomes visitors.

Undecided about our plans, we packed the Terrain that GMC provided for us, with our beach gear — chairs, umbrella, cooler — and luggage. As it turned it, the Terrain, as a compact SUV, was an ideal choice for this trip. It easily held all of our beach equipment, had the power to run the AC full blast with no loss of power on the highway and, when we arrived in Annapolis, fit easily down the sometimes narrow streets. We even managed to parallel park on the one-lane Main Street, something that might have been more of a challenge in a larger SUV. Its sensors helpfully vibrated the driver's seat as we backed into our parking spot, something it also does when you are moving faster and it senses that you may be too close for comfort to the vehicle in front of you.

One of the appeals of Annapolis is that once you find a good parking spot (there are also private lots and public parking garages), you may not need to move again for awhile; almost everything you'd want to see — from the shopping district, to the small inlet with the fancy yachts, to historic buildings — are within a few blocks. On-street meter parking is limited to two hours, however, so choose a lot or a garage if you plan to spend the day.

Best of all, the Naval Academy is literally a one-minute walk from the heart of downtown, which is good because unless you have a handicap or military permit, you can't park on the Academy grounds. 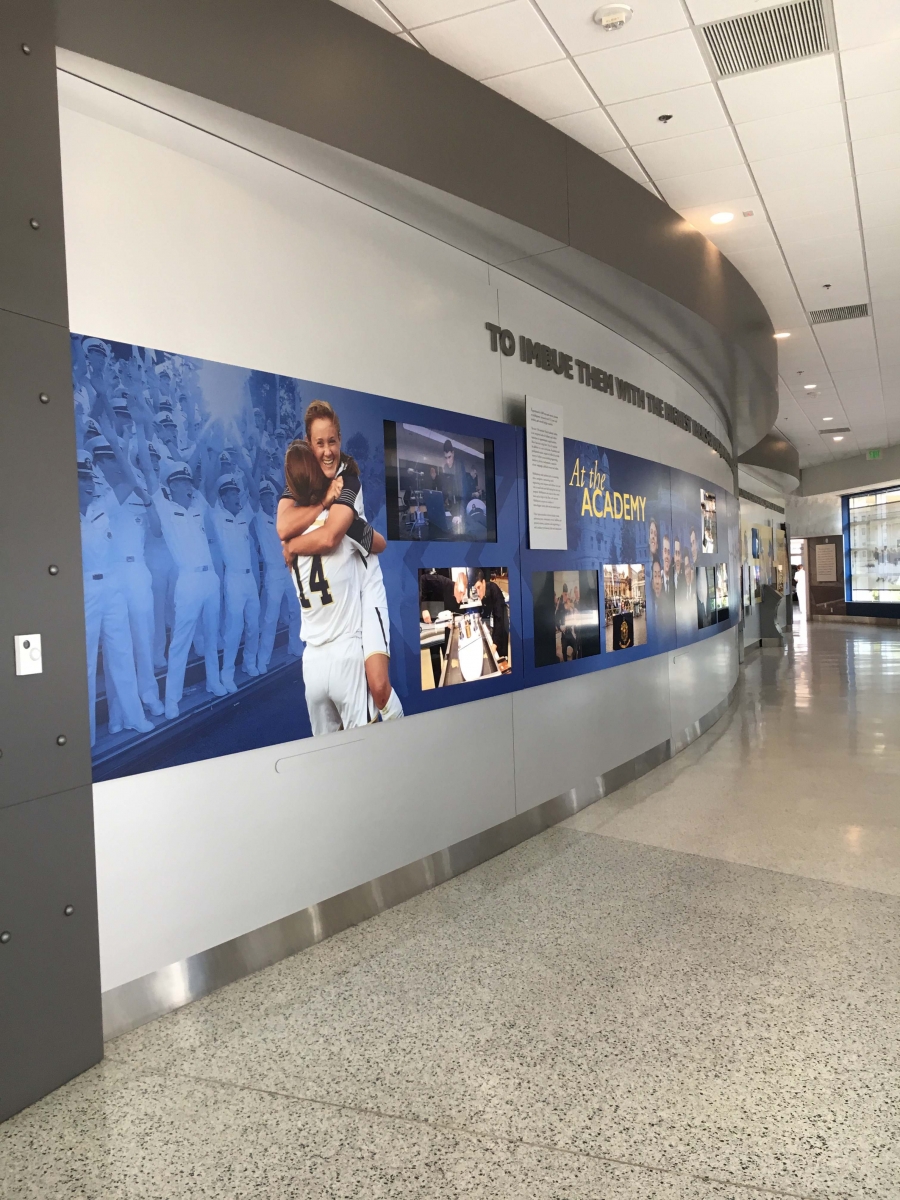 The short stroll up to the Academy will take you right to the its Armel-Leftwich Visitor Center. Bring a photo ID for everyone 18 and older. While the Academy website cautions that some state licenses that are not Real ID compliant may not be accepted, we didn't have a problem with our standard Pennsylvania driver's licenses.

The visitor's center is a newer building that provides an introduction to the history and mission of the Academy through interactive displays and videos. Admission is free, but you can pay $12 ($10 for kids) for a 75-minute guided tour of campus, which ends at the Academy museum, which houses the largest collection of seventeenth- and eighteenth-century model ships in North America.

The visitors center also includes a gift shop, which has exactly the kind of sweatshirts and t-shirts you'd expect for a college gift shop plus all kinds of other paraphernalia, from sailor hats to mini Marine dress uniforms.

If the kids aren't keen on Navy souvenirs, there are plenty of other places back in town to shop, along with a couple ice cream parlors as well as plenty of spots for lunch or dinner.

Grab an ice cream cone and head for a bench near the dock, which is small but often so crowded with expensive boats it's been dubbed Ego Alley. A perfect, peaceful way to finish off the day.