The Disneyland measles outbreak has shined a spotlight on the reasons those in the anti-vaccine movement (aka anti-vaxxers) cite when they're asked why they're so stauchly against immunizations. MomSpeaker Lisa Lightner — as mom of a son on the autism spectrum and a special needs advocate, once an anti-vaxxer herself — pokes holes in nine of those reasons here.

I wasn’t going to write about this. Then we had a minor scare with a friend's little boy, as we thought that maybe he had gotten the measles despite being vaccinated. It is crazy to me that this disease was all but eradicated 20 years ago and now it’s back. For the most part I have sworn off of or out of vaccine debates. But I couldn’t resist because a decent friend who seems to be reasonably intelligent appeared to be buying into the fear. And in somewhat of an a-ha! moment I realized what it is about the anti-vaccine movement that I loathe. Aside from the fact that they put the medically fragile and medically complex and the very young at risk . . . to the point where a family cannot even go to Disneyland for the holidays.

It’s the constant lying. Lord, do I hate liars. And that’s what you all are, liars. So here you go, here is your opportunity to be honest with yourselves. Because when you lie about this, I don’t trust anything else you say. You know these statements are true, and when you try to convince yourselves and others differently, you look ridiculous.

Stop trying to convince others that you have facts on your side because you do not. You are embarrassing yourself when you state information that simply isn’t true. Admit it, and say it out loud. “Despite the overwhelming evidence that vaccines are safe for most of the population, for whatever reasons, I am still afraid to vaccinate my child.” For 99.9% of you, you do not know anyone who was harmed by a vaccine. You don’t. So stop telling us these stories that you do – it’s not mathematically possible. You’re buying into the fear and speculation that you read on the Internet.

#2: “I am unapologetically relying on you vaccinating your kids so that my family can rely on herd immunity."

Vaccine skepticism is a first-world luxury. In other countries, moms walk for miles to vaccine clinics so that they can get their children immunized. Without herd immunity, you would not be able to make this choice. The irony here is that you are trying to recruit more members for Team Anti-Vax, when what you should be doing is convincing more of us to vaccinate. For every team member you get, you have increased the risk for your own child. The fact that you don’t see the irony or hypocrisy of this is amazing. We have every right to be angry with you for putting newborns and people with cancer at increased risk. Which you are doing. You are being selfish. OWN IT. Honestly, the fact that you come to us with this air of superiority and pious, condescending attitudes…all the while taking advantage of the herd immunity that WE ARE PROVIDING for you, this is the most annoying part and why sometimes pro-vaccine people want to smack that smug grin off your face. How dare you judge me for my choices, when it is MY CHOICES that make your choices possible.

#3: “I am not having my freedom of speech rights suppressed.”

Freedom of speech means that the government cannot cite you for saying something. However, that does not give you protection from criticism. Anyone can post their thoughts and beliefs. No one is denying you that. If you have unpopular beliefs, that does not mean that private individuals have to listen to this shtick without criticizing. Nor do I have to provide the forum or the bandwidth for you to express your opinions. You are unpopular because you are selfish (see #2). There is no conspiracy on the part of doctors or "big pharma" as you like to call it. All data will tell you that treating a disease nets more profits than cures or prevention, so if anything, the opposite is true.

#4: "I know that both options have risks, and I am choosing the side that has a higher risk to my child, my family and others."

Not vaccinating is not without risk, it’s just a different risk. All the scientific evidence points towards vaccinations having less of a risk than the disease. You are just banking on nothing happening, despite the increased risks. Stop trying to convince us that we are the ones putting our kids at a higher risk, because it simply is not true. Hey, my dad hates to wear a seat belt, and he knows the risks. But he doesn’t lie to me and tell me that I would be safer without a seat belt. Sometimes we choose different risks, but don’t lie about it.

#5: “For reasons that either I do not know or will not share, I prefer to listen to blogs and speculation instead of doctors, the CDC and the AAP.”

You don’t have any credible scientists or doctors on your side. You simply don’t. Own that, admit it. There is no conspiracy theory against you. You simply are trying to present facts that do not exist and you are putting others at risk. You also should be honest with yourself and realize that 99% of those websites have a product to sell you. And while we’re at it, can you please go refresh your memory on the difference between a theory and a hypothesis? Because all the anti-vaccine sites have provided is a hypothesis. Not a theory.

#6: “For reasons I do not know or cannot articulate, despite the scientific evidence to the contrary, I am afraid of autism.”

Admit it, you are. Really, enough with the “Oh, it’s not autism that I’m afraid of…” You are.

#7: “Even though I say I care as a mom, truth is, I simply cannot comprehend what it feels like to have an at-risk or immunocompromised child in the community.”

Stop telling us that you really do care about others in the community. You don’t. The newborns, the adults who are going through chemo . . . you don’t care. You are turning it off in your brain. Otherwise, as a human being, how you could possibly be willing to put a 3-year-old cancer patient at risk with your decisions? If you really understood what it’s like to have a child for whom the flu/chicken pox/measles would likely be deadly, you wouldn’t make these choices.

#8: “Fact is, I think that these diseases are harmless, but I’ve never seen them, so part of me is concerned.”

You cannot in good conscience say with 100% certainty that you think that the measles are harmless. You simply are counting on herd immunity (#2) and you think it won’t happen to you. I can tell you this – I have given many Shot@Life presentations to older generations like Lions Clubs, Rotary and GFWC. Many of those senior citizens saw polio, had siblings who died from the mumps, had neighbors with measles. Those folks need no convincing and are astounded that anyone would make the choices that you are making. Don’t worry though — at the rate you’re going, you’ll get your chance to see this stuff.

#9: “It’s easier to be defiant and angry and argumentative than to admit I was wrong.”

Any reasonable person has got to be asking themselves, if there were a risk to vaccines (higher than risk of disease), wouldn’t we have found it in 25 years? I mean, don’t you get tired of the same old arguments and lack of evidence? If no new evidence comes up, how long are you going to keep up these same talking points? Another 20 or 25 years? “We need to research them more.” No we do not. They have been researched over and over. When I came clean about my life as anti-vaxxer, it was hard. I had to come clean to myself, my kids and my husband — that I had put all of us at risk. Admitting, as a mom, that for a period of time you picked a higher risk for your children . . . that’s really hard to do. I’ve been there. But now I can rest much easier knowing that we are safer and healthier since we are all vaccinated regularly.

As it should be. 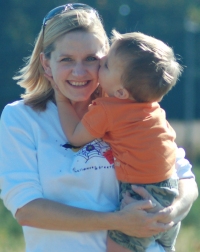