To commemorate living people during Black History Month is to remember that they are the stuff of future history as well as current.

he very act of being appointed secretary of state by President George W. Bush put Condoleezza Rice in the history books as the first African-American female secretary of state. Her cultivated civility in an administration that seemed far from understated was
remarkable then and informs the fascinating story she tells in her autobiography for young readers, Condoleezza Rice (Delacorte Press, $16.99, ages 11 & up).

Besides making history, she lived it by growing up in a segregated childhood but getting the most from every experience on her way to the top of American political life. As the country’s chief diplomat, she put to good use her mother’s advice: “If you are overdressed, it is a comment on them. If you are underdressed, it is a comment on you,” given in the context of getting used to living in Denver after a more formal environment in Alabama. 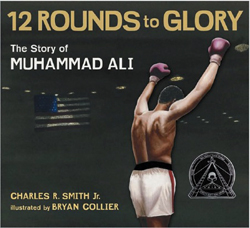 In Charles R. Smith, Jr., Muhammad Ali has found the perfect biographer, a poet who can pack a powerful punch, at least verbally, as he shows in 12 Rounds To Glory (Candlewick, $10.99, ages 10 & up).

Odessa Clay, the boxer’s mother, eventually lived in Philadelphia, but raised her family in Louisville, where “Whites Only stores/ and Whites Only park/ sifted you out/…and drew color lines,/ but your middle-class parent/ managed to survive/ through hard work and faith….”

Ali is another living person who endured an entirely different world growing up, keenly observing at the age of 5 that all the merchants and bus drivers were white. Illustrator Bryan Collier captures the spirit and strength of Ali’s Olympic and professional boxing exploits with muscular drawings that ooze explosive power as they accompany the rat-a-tat-tat of the story and its subject. 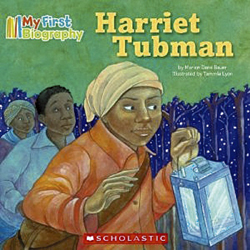 Harriet Tubman’s exploits in escaping the South to Philadelphia, then bringing the rest of her family and eventually campaigning for women’s right to vote, is simply and eloquently told by Marion Dane Bauer (Harriet Tubman, Scholastic, $3.99, ages 4-8).

With only a single sentence on each page and colorful but serious images by illustrator Tammy Lyon, the book introduces youngsters to subjects they will find absorbing — even if difficult — a valuable early lesson in the enormous changes that people have lived through in our rich, if not always glorious, past.