Archery could develop into the sport of a lifetime for your kids. Hit the bullseye here in the Delaware Valley. 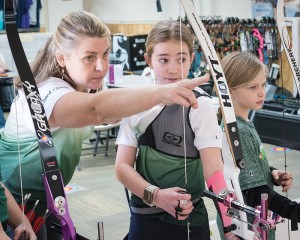 Everybody seems to be channeling their inner Katniss Everdeen these days. The popular character from “The Hunger Games”—with a quiver full of arrows slung over her shoulder, shooting in a brave stance—made the ancient sport of archery cool again.

“We saw a huge surge after ‘The Hunger Games’ came out. We’re still seeing a huge surge (in the sport),” says Cindy Gilbert-Bevilacqua, head coach at Middletown Archery in Media. She says this resurgence coincides with every Olympics and every major movie or book release featuring archery. The pandemic is also partly to blame for archery’s current wave of popularity.

“Having an outside range open makes families feel a lot more comfortable,” says Gilbert-Bevilacqua. “We saw an uprise in family participation. It’s a rare sport that includes all family members.”

And this ancient sport has new appeal for many Philly-area families.

A Focus on Archery

The McCloskey family of Norwood, Pennsylvania, recently discovered archery. Parents Kim and Jason thought it may be a good activity for two of their sons, who hadn’t plugged into traditional youth sports.
“Both boys have ADHD, and archery—where you need to focus—is really helpful for them,” says Jason.
Sons Dylan, 13, and Elliot, 9, began taking weekly lessons at Middletown Archery last summer.

A beginner’s lesson package made it easy—all equipment was provided. You could say the first lessons hit the target: The boys, now outfitted with bows and arrows, recently joined the center’s Junior Olympic Archery Development (JOAD) program.

In a nutshell, archery involves aiming for the center of a circular target. A bullseye scores 10 points. The rings emanating outward from the center correspond to decreasing point values.

“You’re striving to hit the middle every time, but we keep the target up closer for beginners,” says Gilbert-Bevilacqua. “We develop them (as archers), as they develop.”

Dylan says he’s enjoying making new friends—and he has a healthy perspective when it comes to his new sport. “My goal is not to get a bullseye. It’s to do my best and enjoy it. But when I do get a bullseye, it makes me happy,” he says.

Even though they’ve been involved less than a year, the family is already recognizing the sport’s benefits.

“The boys focus when they play video games, but (archery) isn’t staring at a screen. It’s interacting with another person, setting goals, and eventually it becomes a team they form bonds with,” Jason says. Meantime, Kim gives head coach Gilbert-Bevilacqua much of the credit for her “patient” outlook. 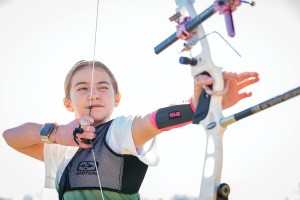 This year is Gilbert-Bevilacqua’s 38th year as a JOAD coach. Approximately 75 youth—ages 6 through 20—are enrolled in the program, which is operated under USA Archery guidelines.

“We break it down into skill levels—beginners, advanced beginners, intermediate and elite travel,” says Gilbert-Bevilacqua.

The program heads outdoors May through September and indoors October to April.

“The biggest, most exciting thing is when they achieve things on their own—that smile, that self-esteem comes out, and they’re beaming,” says Gilbert-Bevilacqua. “It’s always great to see them achieve their goals, especially at a tournament when they put everything together. Sometimes they don’t have to win a medal if they have a personal best.”

Gilbert-Bevilacqua knows much about personal bests. She began archery with her father at age 5, won her first competition at age 10, earned a full college scholarship thanks to archery and made the U.S. National Team twice.

“My hobby became my career,” says Gilbert-Bevilacqua. One of the pinnacles of her coaching career was going to the 2012 Olympics in London as an assistant coach. Back home in the Philadelphia area, she enjoys sharing her love of archery with people of all ages and abilities.

“I’ve had the opportunity to teach or coach kids with some unique circumstances—medical situations they’re overcoming, those that need more focusing or those who need to strengthen their upper body,” says Gilbert-Bevilacqua.

“I always say it’s a sport for all ages—I’ve had people in their 60s and 70s come for lessons,” says Dawn Altomonte of Springfield, Pennsylvania, also a Middletown Archery coach. “You can take it to the next level, up to the Olympics, or keep it recreational—even do it with your family in your backyard.”

And it’s very much a family sport for Altomonte. Gilbert-Bevilacqua coached her when she was growing up. Now Altomonte is coaching alongside her, and her two young daughters are following in her footsteps.

Charlotte Altomonte, 8, explained one of her most recent archery lessons: When holding the bow, taking an archer’s stance, she learned a handy trick to pulling back the string and keeping her arrows on target. There’s a little button called “the kisser button.” You achieve good form when you nestle it into the corner of the mouth.

Archery has come full circle for Gabe Karl, 18, of Franklinville, New Jersey. Years ago, when his mom Amy decided to homeschool him, she searched for an activity that would fulfill his physical education requirement and discovered archery. “He just took to it,” Amy says.

Gabe shot his first arrows at age 8 or 9. Now he gives back to the sport by coaching the next generation. “I enjoy the mentorship aspect to it,” says Gabe. “I feel like archery makes you self-disciplined with practice, but it develops your mental skills too—how to do well under pressure, how to think positively and be successful in general.”

Mom Amy agrees: “I think it’s taught him to trust his ability to do hard things, to challenge himself. I’ve seen that serve him well as he’s applied for college and internships. Working hard and investing himself in something, then reaping the rewards—I credit archery for that.”

Archery: What’s it cost to give this sport a shot?

Archery in the Area 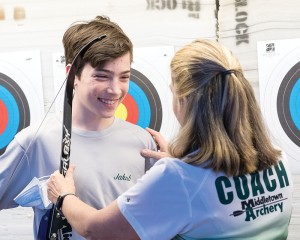 The Benefits of Summer Camps for Special Needs