Hello Nature: How to Draw, Paint, Cook, And Find Your Way

OK, William Wegman’s Hello Nature is not a kids’ book really. But there are ways to consider it one. It has a section called, “A Map of Your Room,” in which the author coaches kids to draw whatever they see  from an overview, as though looking down from a hole in the ceiling.

So he does address kids and a lot of the book, which is a combination of diary, drawings, other people’s observations and the author’s reflections on his childhood, is about Wegman’s interest in nature and how he came to be an artist. The book contains many paintings that incorporate postcards of nature and old scenes from his own childhood combined into much larger works.

He has lots of Weimeraner photos, both in nature and made up as humans, which are the photos that made him famous. He even has a Weimeraner head on a drawn moose, but this gets back to his just being a kid at heart, which is the best justification for reading the book in the first place, and letting kids read it, too. 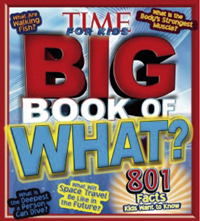 Big Book of What: 801 Facts Kids Want to Know

To be more precise, this is a book of facts kids didn’t know they wanted to know, but are pretty cool once they know them.

These facts will not win them any academic kudos or help boys impress the girls when they get older. But they do reflect the wide and wondrous world we live in, from the herring who communicate with each other by farting to what was the jazz age and the Harlem Renaissance.

This is not a reference book because the facts are so random, but the illustrations are dramatic, often garish. It painlessly increases knowledge and is consistently more reliable than facts found online. 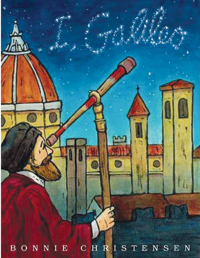 In I Galileo, author and illustrator Bonnie Christensen focuses on Galileo’s invention and use of telescopes and microscopes to enlarge the worlds that were far away (the planets and moon) and too small to see otherwise (flies crawling upside down on a glass).

Only at the end of the book are other Galileo inventions mentioned, including pumps and irrigation systems, thermometer, pendulum clock and compass — things that showed a power of deduction as well as observation.

It was the observation that got Galileo in trouble with the church in Rome, so as a made-up autobiography, the book does convey the trials of his life in pretty drawings and informative charts and words, though with only a glimmer of why Einstein called him “the father of modern science.”