What a great weekend we had. MetroKids staffers attended a trio of major events in the area: the Philadelphia Science Festival, Kidsland at the Katz JCC and the Philadelphia International Children's Festival.

I was at the Science Festival on Saturday, and it was truly thrilling to see so many thousands of families enjoy the beautiful weather as well as the hundreds of experiments and STEM demos available at the booths lining the Ben Franklin Parkway concourse surrounding the Franklin Institute. (Speaking of Ben Franklin, he graduated from kite-flying to rocket-launching at the MK booth. MK music reviewer and WXPN's Kids Corner hostess with the mostess Kathy O'Connell also dropped by to say hi. We've got scientific evidence of both appearances here!) 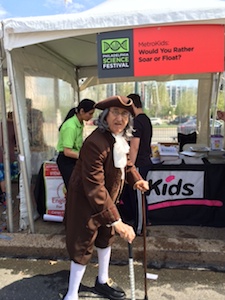 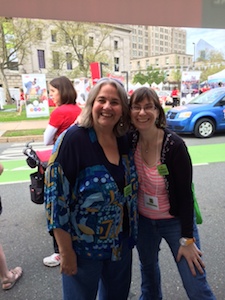 About that rocket-launching. Our good friends Javier and Jaya from Engineering for Kids came along to conduct the experiment, shooting off air-pressured "rockets" (really a straw with a modeling-clay nose cone and index-card fins) to kids' delight all day. They also had our guests poke pencils into a water-filled baggie — with no spillage (the polymers of the plastic bag adhere around the pencil), shake up some homemade lava lamps and float a mag car down a track. We all had a (literal) blast. 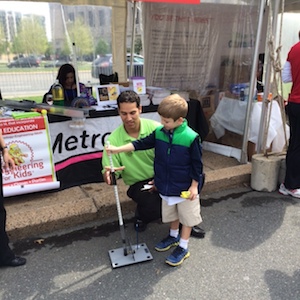 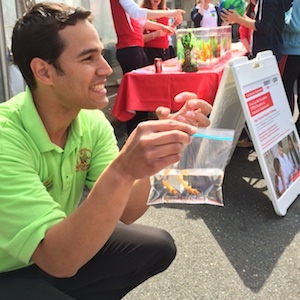 Sunday at Kidsland at the Katz JCC, the MK booth was buzzing with kids making candy necklaces before rushing off to check out the real Batmobile! And when they weren't taking in the eye-popping shows (and crazy weather) at PICF at the Annenberg Center, kids came to the MK table to craft cool Henri Rousseau-inspired bags put together by our friends at the Barnes Foundation.

And in true MK style, we had fun giveaways going at all three events. Congratulations to the following winners, picked at random!

Winners of a family four-pack to the Franklin Institute

Winner of a family four-pack to the Barnes Foundation

Winners will receive their prizes via mail. Thanks to all who stopped by, to Engineering for Kids and the Barnes Foundation for their fantastic activities and enthusiasm and to Tiffany Kuperschmidt, who called on her inner camp counselor to lead activities at both the Science Festival and Kidsland.

Next up? We'll be at the Collingswood May Fair on May 26. Come out to see us and join the fun!