The Marvel Experience: What Should Parents Expect?

The traveling pop-up show “The Marvel Experience,” which bills itself as “the world’s first hyper-reality tour,” arrived in Philadelphia yesterday and will remain sprawled across the Lincoln Financial Field complex until July 5. Smashing the ribbon with the actual hammer of Thor prop from one of the Avengers films, Rick Licht, CEO of the company taking The Marvel Experience across the country, welcomed the crowd, aided by the Phillies Phanatic, the Eagles’ Swoop and a pair of Eagles cheerleaders.

Up the stairs and an escalator, you’re led through initial attractions that prep you for the “mission” ahead. Although the surrounding food court might break the illusion for older kids, the younger ones rush up to futuristic-looking booths that give a brief video synopsis of the superheroes’ origins and backstory. Here, there are some initial interactive exhibits, including the Avengers Encounter, where characters like Black Widow and Captain America sidle up to you after being summoned by a specific pose. Most people’s default pose seemed to call up the Hulk. 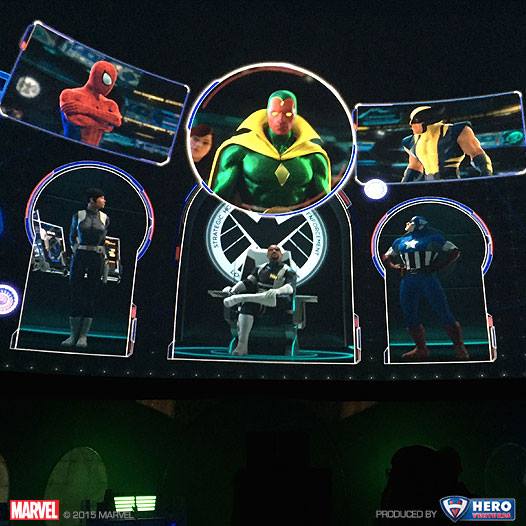 After descending to the field to be prepped with some additional information on the mission and a few more interactive games, you walk through the players’ tunnel to the real show: The 360-degree, 3D stereoscopic video-dome is housed in a dumbbell-shaped enclosure out on the field. Once inside, participants are treated to an immersive show featuring Captain America, Spiderman, Iron Man, Black Widow and the full cast of Marvel superheroes and villains as they complete the event's themed mission, culminating in a seated motion ride replete with vibrating chairs and air jets.

What the show’s producers describe as “mild animated violence” might be a tad more so in reality; although there is nothing depicted that could be considered graphic, the disembodied head of M.O.D.O.K. cooing “I’m going to kill you…it’s what I do” might be unnerving for some small children. (It might amuse parents, however, that the voice belongs to Jay & Silent Bob director Kevin Smith.) But outside of this, the show contains nothing kids haven't already seen in the Avengers movies. 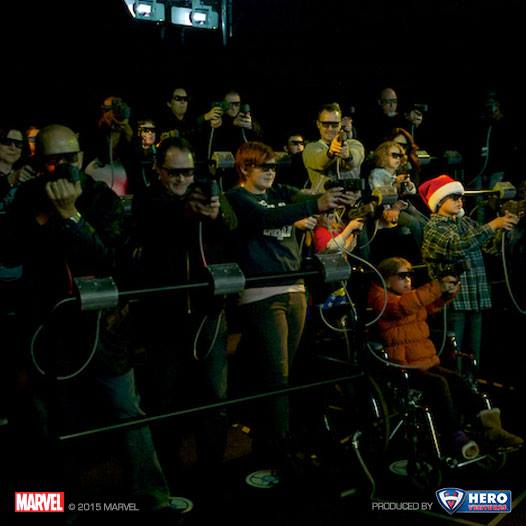 The 3D holographic elements are a relatively small chunk of the show’s given run-time of 2 to 3 hours. The duration may depend more on how much time your child elects to spend on the Holo-Blaster Training Simulator (pictured at left) and Spiderman Climbing Wall at the very end. (Or in the six huts of gift shop items erected nearby; a plastic hammer of Thor runs $32.) The entire exhibit is accessible with some assistance from stadium staff, and interpreters are available at certain show times for the hearing-challenged.

Though there were some technical glitches at the opening of The Marvel Experience, these have likely been mended, and children enthralled with the superheroes they’ve seen on screen will be excited to see them “live,” so to speak. The event is all-ages, but kids younger than 10 years are likely to get the most out of the spectacle.

Standard tickets for children and adults run between $40 and $50, with a “VIP upgrade” available. Though the ticket price may be a bit steep, The Marvel Experience is here for only a short time before it swoops off into the sunset. Click here to book tickets and get more info.