It is probably too late to start exercising to compete in the 2012 London Olympics, but not too late to learn more about London, a living, breathing history lesson for all ages and especially pertinent to Olympic visitors.

Salvatore Rubbino’s A Walk in London (Candlewick, $16.99, ages 4-8) takes a well-organized tour from Big Ben to the Tower of London, pointing out attractions along the way. It can serve as an oversized guide book for any youngster on a family trip. Factual tidbits accompany the monumental sights, like the River Thames dividing North and South London and how banknotes started as receipts that the Bank of England gave to people for the gold they kept in storage there. 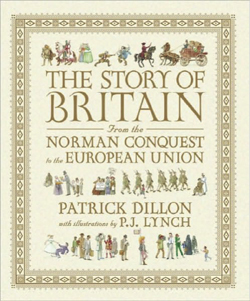 Patrick Dillon’s The Story of Britain: From the Norman Conquest to the European Union (Candlewick, $21.99, grades 6-8) is a hefty tomb, as would be expected of any history covering a millenium. It divides most of British history into monarchial periods, from the Tudors to the Victorians, with world events put in a British context. P.J. Lynch’s traditional but simple drawings further  enliven a subject that can compete with sports for interest, if not always excitement