The Battle of the Screens

Like most American families, we struggle with the Battle of the Screens. How much time should the kids be allowed to play video games and watch TV? How much is too much? How do I establish reasonable limits? Am I being too strict, too lenient, too uptight, too lazy?

We go back and forth. I’m pretty sure our kids don’t watch as much TV as the “average American” — whatever that is — but they watch too much for my liking. Sometimes I get lazy when I’m working and allow 30 minutes to extend to an hour or two (or even more?). Then there are other times when we force our kids to detox and don’t allow TV for weeks or months at a time. I’m sure that it’s best to find a level of moderation and stick to it, but that’s easier said than done.

Lately, with a certain 5-year-old with a lingering virus, I’ve been erring on the side of way too much screen time, and I’m about ready to put a stop to it.

A few days ago, when the kids got up to a 2-hour delay, the first thing they wanted to do was watch TV. I started to waffle, and finally I took a stand.

“NO TV,” I declared firmly. “Find something else to do.”

Within 5 minutes, I found this: 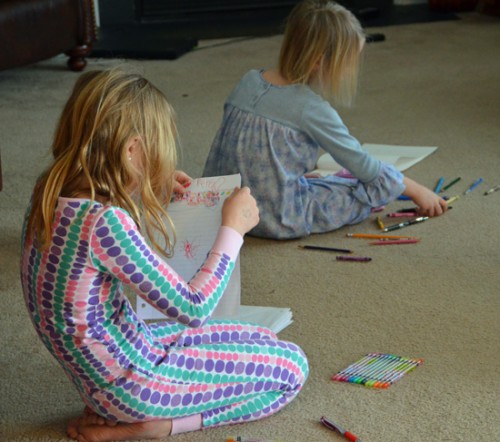 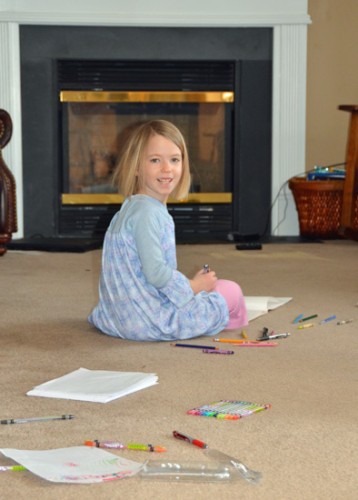 See? She’s even happy about it!

I don’t know why it always amazes me that without TV, they will find something else to do — and most likely, something a lot more productive than vegging in front of the TV.

Do you know that too much screen time can actually reprogram their brains?

Neuroscientists have shown that environmental experiences significantly shape the developing brain because of the plasticity of its neuronal connectivity. Thus, repeated exposure to any stimulus in a child’s environment may forcibly impact mental and emotional growth, either by setting up particular circuitry (“habits of mind”) or by depriving the brain of other experiences.

You should read the whole article, which appeared several years ago in AAP News, published by the American Academy of Pediatrics. It’s quite interesting.

I realize that we live in a digital age, and I’m practically surgically attached to my smartphone so I don’t know why I expect anything else of my kids. And yet, at their young ages, I feel like there has to be some benefit in keeping the screen time to a minimum. They will have plenty of time to fry their brains when they’re out of the house. At least then, it won’t be my fault.

Jo-Lynne Shane is a mom of three from Chester County PA. Read her blog, Musings of a Housewife, at MusingsOfAHousewife.com

More from MetroKids on Screen Time