Tarantulas: Alive and Up Close at the Academy of Natural Sciences

Are you afraid of spiders? Does the word tarantula conjure mental images of a huge, black, hairy monster and send shivers up and down your spine? Me, too.

Or that was my perception of tarantulas before I screwed up my courage and attended a media preview of Tarantulas: Alive and Up Close, the newest exhibit at the Academy of Natural Sciences of Drexel University, which opens to the public on Sat., Jan. 30. I wasn't sure quite what to expect or if I'd even be able to handle seeing these creatures in person. Maybe you are the same and think, "There's no way I could take my kids to that exhibit. It would scare me to death!" I encourage you to reconsider.

What I discovered during my visit was a comfortable atmosphere in which to learn about these large spiders and set my fears aside. The live tarantulas reside in glass enclosures, surrounded by all sorts of fascinating information about their habitats and anatomy and how they survive in the wild. For example, did you know that tarantulas can kick off tiny hairs from their abdomen when they feel threatened? Those hairs are meant to make your skin itch so you'll leave the spider alone.

I thought I'd see spiders scurrying about, but it turns out that many tarantulas are actually quite calm. During my visit, Karen Verderame, one of the Academy's brave spider keepers, held two tarantulas in turn so we could see them up close under a magnifying lens that projects onto a large screen. You, too, can see such live presentations if you visit on a Sat. or Sun. at 11:45am while the exhibit runs through May 30, 2016. The magnification revealed a great view of the spider's entire body — hairs, eyes, fangs and spinnerets. Yes, tarantulas spin silk, something I hadn't really thought about before. Unlike the spiders we're used to finding on our porches and in the corners of our living rooms, tarantulas don't use silk to spin webs that capture prey. Instead, they use silk to line their burrows and hold their eggs. 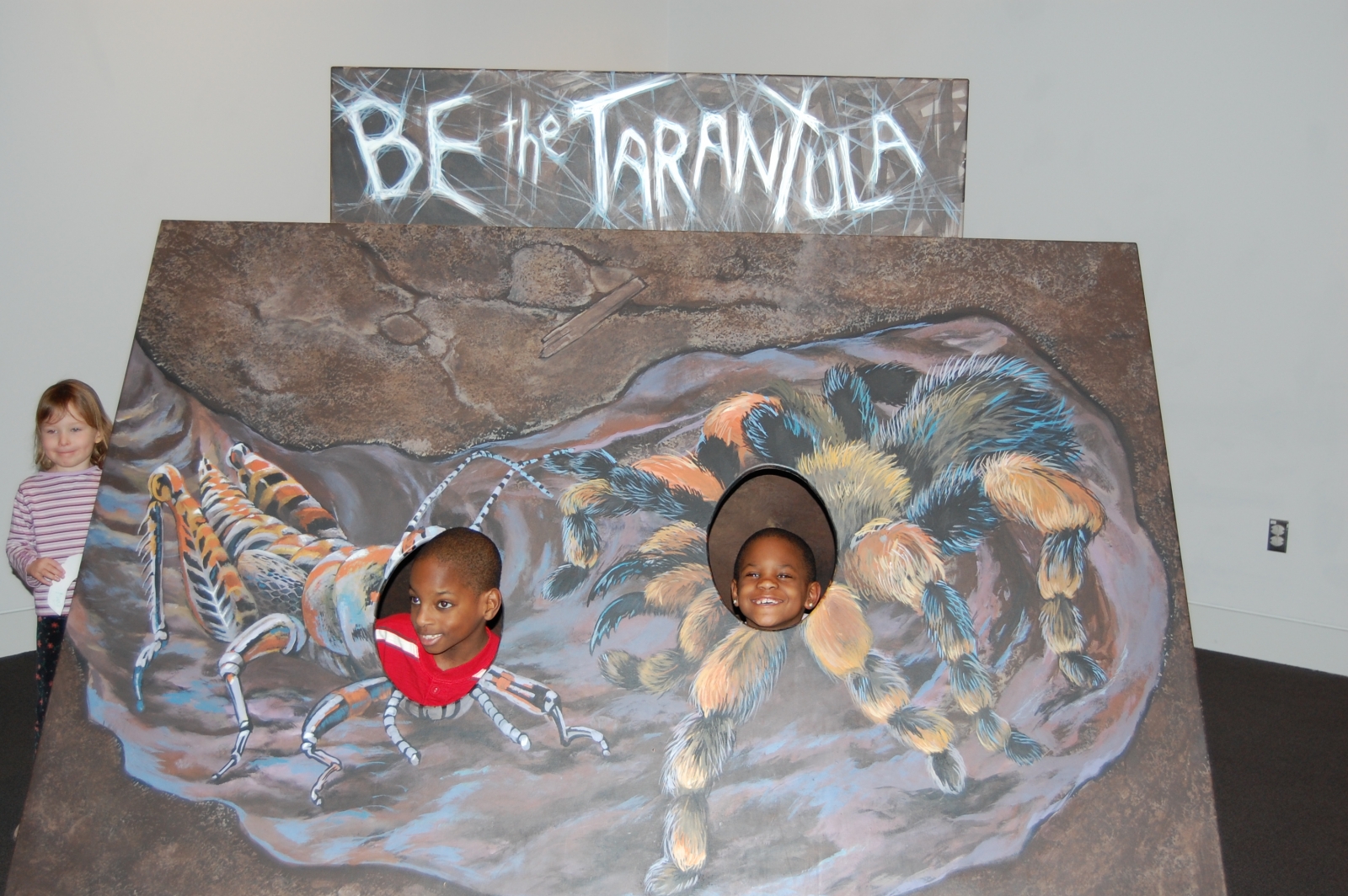 In addition to live presentations, the exhibit incorporates fun activities for kids and adults to enjoy. Dress in a spider costume and climb into the human-sized jelly jar so you can brag to friends that you're a specimen at the Academy of Natural Sciences. Grab a list of common spiders, and try to find them all in the backyard scavenger hunt. Or get your picture taken as a tarantula at the photo op station (right; credit: Outhouse Exhibit Services). These are only a few of the hands-on activities visitors can use to explore the fascinating world of tarantulas. You'll have to discover the rest for yourself.

Before I left, I asked the Academy's director of public relations, Carolyn Belardo, what she would say to someone with a fear of spiders who might have a child who is excited about arachnids. She responded, "Kids, bring your parents and teach them to like spiders. Spiders have their role in nature — eating other insects — and are not going to hurt you." She pointed out exactly what I had experienced myself: The more you learn about tarantulas, the less afraid of them you are likely to be.

So don't let your preconceptions of tarantulas from movies or TV keep you from this interesting exhibit. I promise you'll learn something, and you may even find yourself seeing beauty in some of the tarantula species on display. For the record, these impressive arachnids come in every color under the rainbow.

During opening weekend, Jan. 30-31, the Academy will have several special events focused on spiders and other creepy crawlers. Check out the full schedule of activities. Buy tickets online or at the admissions desk.