When children do well at school, they earn good grades. But when children succeed at camp, they learn valuable lessons. Summer day and overnight camps strive to teach children character-building skills that are good for life.

“Camp teaches values such as self-esteem, teamwork, and caring — areas where traditional schools sometimes cause more detriment than good. And camp allows everyone, not just the top student and the best athlete, to thrive and enjoy the process of learning,” says Peg Smith, CEO of the American Camp Association (ACA).

At Camp Gan Israel, a day camp for children ages 3 to 12 with facilities in Cherry Hill and Voorhees, NJ, camp director Rabbi Yitzchok Kahan says that many activities and craft projects are designed to teach teamwork.

“Our camp promotes the value of children interacting positively with each other instead of acting independently,” he says, “so our projects often include at least two-person teams. For example, one child holds the wood while the other hammers the nail. When our older campers go on an overnight camping trip, they first participate in a workshop where they choose which children they will share a tent with, understanding that they will have to work together as a team to pitch their tent.”

David Halley, director of Bear Glasgow Family YMCA’s Camp Cassey in Newark, DE, uses picnic tables and circle time to facilitate interaction. “At school, where the focus is on academics, kids typically face the front of the room. At camp, we encourage engagement by always sitting kids face-to-face so they can smile at each other and learn how to cooperate. And the games we play aren’t about elimination — you don’t have to be the smartest or most athletic to win. We do help kids to try something they have never done before, and in the process, learn a skill they can use for the rest of their life,” he says. 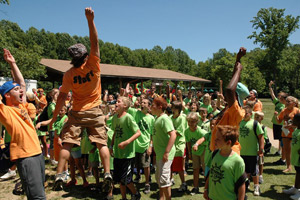 As a YMCA program, everything at Camp Cassey revolves around the Y’s core values of Caring, Honesty, Respect, and Responsibility. During the camp day, children rotate through different activity stations; on certain days stations will focus on one of the core values. But a daily highlight is always the afternoon Pow Wow, when counselors guide children in discussing how the core values were a part of camp that day.

“Talking about character values gets children thinking about them. Kids get used to answering questions during the Pow Wow, and start anticipating them during the day. We also provide talking points to parents so they can ask kids values-focused questions like, ‘How did you show that you cared about your friends at camp today?’” says Halley.

Campers at HOPE for Kids’ R-Camp and Teen Camp, week-long overnight programs in Schwenksville, PA, often demonstrate caring during “Encouragement Raids,” in which one cabin will plan to secretly do something special for another cabin.

Jack Rosenquist, HOPE for Kids’ public relations director says, “The intent is to create a group spirit of caring. By cleaning up the other cabin, or leaving surprise treats or cards for other kids, children learn to share in the joy of giving and working together as a group to do something encouraging for others.”

Inspiring youth to care about others is the foundation of Spark the Wave’s “Wave Week” camp for 7th to 11th graders, held on the Villanova University campus in Villanova, PA. “Our goal is to train the next generation of community service leaders,” says Bill Gallagher, founder and president of Spark the Wave.

Wave Week campers learn about motivation, communication, teamwork, problem solving, leadership and more in skill-building workshops. They then practice what they’ve learned in community service projects during the camp week and when they return home. Gallagher says that although Spark the Wave teaches similar workshops at high schools, the intensity of Wave Week camp is the “magic part of the potion.”

“At camp, kids are cocooned away and not distracted by other things. Camp allows kids to focus on being a leader or test new skills or maybe try to be a new kind of person for that week,” says Gallagher. “Some children try putting on a new kind of ‘character jacket’ and when they see that it feels good, they realize that they could be that kind of person — someone who is a community leader or someone who cares about helping others.” 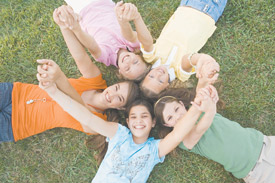 “Parents tell us that when campers come home, they are more appreciative and care more for their entire family,” says Rosenquist. “Kids tell their parents that camp was the best week of their lives, and they want to come back when they are older to work at camp.”

Kahan and Halley also measure success by the positive changes they see in children during the course of a summer and from year to year, and in the number of children who return to camp to work as counselors.

In Camp Cassey’s weekly COW (Character Of the Week) ceremonies, campers are entertained by the Chick-Fil-A costumed “cow,” who rewards children’s core value behaviors with coupons for free food and prizes from other sponsors. Halley says, “We see lots of children who maybe didn’t behave well in their first year at camp come back to win a COW award the next year, and we get many returning children who grew up in the camp program and now want to be staff so they can have the same impact on kids that their counselors had on them.”

Camp Gan Israel also rewards good camper and cabin behavior for things that demonstrate positive interaction, such as cooperating and cleaning up. Kahan says, “We want campers to grow as people. Our campers are very diverse.

Children learn that we can all work together, no matter what your background is. We are all here for a common goal: to make this world a better and peaceful place. And when campers then become counselors, they pass this lesson along to other children.”

Halley says, “We don’t just train camp staff in how to teach a game. We talk about the life skills you can teach within a game. Soccer is an opportunity to teach the importance of being physically active, how defense means working together as a team, how passing depends upon communication, and how success requires listening to your coach and teammates and keeping your morale high. Camp takes the focus off competition and puts it on character.”

7 Advantages of Sending Your Teen to Summer Camp

Questions to Consider When Selecting a Summer Camp for Your Child