Disney's Planet Challenge is an environmental program that empowers students to make a difference in school, at home and in their local communities. A panel of scientists, environmental experts and educators including representatives selected the contest winners. 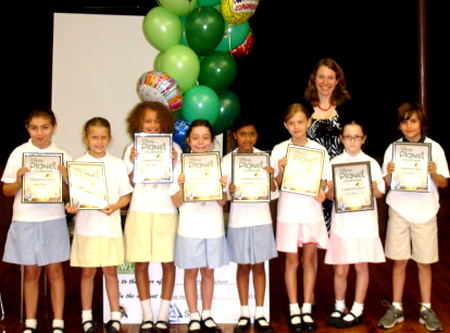 “On the first day of school, the students asked if they could do a Planet Challenge project,” says Mrs. Bahnck. “When we brainstormed ideas, the students were all very concerned with cleaning up litter and stopping it from going into rivers and oceans. We began the project by regularly picking up litter on the grounds of the school.”

By finding sponsors for each piece of litter they picked up, the 3rd graders conducted an “UnLitter a-thon” for Hug IT Forward, which builds schools in Guatemala using plastic bottles for insulation. They also conducted a Healthy Snack Sale, and raised more than $1,000 for the organization.

“We teamed up with our local supermarket to try to spread the word and convince people that they should use reusable bags at the store instead of plastic,” says Mrs. Marrero. “Pine Hill Market generously donated reusable bags that were given out at school to each student.

“My students went class to class, explaining our project and all the dangers of using plastic shopping bags and asking for help with our cause. In addition, our class decorated close to 300 canvas bags with our logo, ‘Go Green With Bean.’ These were received through the website donorschoose.org.”

The 5th graders distributed the decorated bags and an informational flyer at the market, and drew “a large crowd of residents and town officials,” says Mrs. Marrero.

As state winners, each student will receive a prize back that includes items such as a reusable lunch kit, DVDs and other Disney products. Mrs. Bahnck and Mrs. Marrero will receive a $1,000 award, and a customized teacher gift. The students and teachers also will receive a certificate of recognition.

This year’s contest drew thousands of participants from across the U.S. Projects included cafeteria composting, the clean-up of local lakes and watershed improvements.

Planet Challenge is part of Disney's Friends for Change program, which seeks to inspire kids and families to make a positive impact on their world. As part of the program, Disney donates $1 million dollars annually to fund dozens of environmental projects worldwide.