It’s common knowledge that a healthy breakfast is key to starting the day right. That goes doubly so for school kids, for whom a full stomach is important for classroom focus and academic achievement. Research has shown that students do better on both daily curriculum and standardized tests after they’ve eaten a nutritious meal; when kids are hungry, it’s more difficult to concentrate and learning can become a struggle.

Ideally, a balanced breakfast is being served at home. But that’s not necessarily the case for the 16 million American children who live in food-insecure households, a shocking number of whom reside in the Delaware Valley. According to the latest data from the National Center for Education Statistics, 40 percent of public school students in Pennsylvania, 37 percent in New Jersey and 51 percent in Delaware are deemed as low-income and eligible for free or subsidized school lunches. As such, they are also eligible for the school breakfast programs that are adapting tactics to gain traction in area schools year over year.

To address the issue of hunger in needy children, the federal government set up the School Breakfast Program (SBP) in 1966 and authorized it in 1975. School districts and independent schools that take part in the program receive cash subsidies from the US Department of Agriculture for each meal they serve.

However, only 45 percent of eligible kids who eat lunch at school currently take advantage of their free or reduced-price breakfast, according to the national School Breakfast Scorecard crunched by the national Food Research and Action Center. That breaks down to 200,000 kids in Pennsylvania, 300,000 in New Jersey and 40,000 in Delaware who are still missing out on a sufficient, accessible nutritional start to their school day. Here are several ways local school districts are trying to reduce those numbers.

For decades, New Jersey’s SBP student participation languished. As recently as 2010-11, only 28 percent of eligible children ate breakfast at school, compared with the 85 percent who participated in the school lunch program. Last year, the Garden State achieved the highest increase in the nation for SBP participation, moving from 46th place to 37th. (By comparison, Pennsylvania currently ranks 41st and Delaware, 21st.)

One reason for this improvement is a change made in the way public schools are serving breakfast. In the past, the  majority of New Jersey school districts offered breakfast in the cafeteria before school started, when most students had yet to arrive. Today, many serve breakfast after the bell rings, usually by bringing trays into the classroom during the first few minutes of the school day.

See next page for innovative school breakfast programs in our region.

Quinton Twp. Public School in Salem County won last year’s South Jersey Food for Thought School Breakfast Challenge for increasing its number of in-school breakfast-eaters from 81 to 129, a 59 percent boost. “We have seen great results, including a drop in discipline infractions, which we believe is, in part, due to serving breakfast after the bell,” says Superintendent Margaret Delia.

Penn Wood Middle School in Darby, PA, has also experienced significant success with the classroom-breakfast model. By serving kids breakfast in their homerooms, SBP participation during 2014-15 skyrocketed from 23 to 80 percent. Two other recently developed breakfast approaches that have shown promise at area schools include: 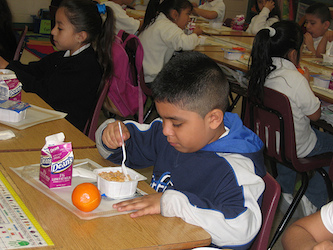 No matter the service model, all SBP meals meet federal nutrition requirements and come with an easy-to-eat entrée, juice, milk and condiments.

Many school districts offer a smorgasbord of these breakfast approaches, to serve as many kids as possible in the way that makes most sense individually. The Colonial School District in New Castle, DE, for one, gives elementary students a choice of Grab & Go and Breakfast in the Classroom, both served before the bell; middle and high school students are also able to eat a traditional cafeteria breakfast. Of its 10,000 students, 4,500 eat breakfast at school daily, says Paula
Angelucci, supervisor of nutrition services.

“We found kids like choices,” Angelucci explains, which is one reason why the district offers six breakfast options, with fruit selections like bananas, grapes, melons and sliced apples; hot and cold sandwiches; different types of cereal; bagels; yogurt; plus two choices of juice and three flavors of milk. The variety has made Colonial’s breakfast program “very, very successful,” according to Angelucci.

In addition to SBP, Colonial participated in a new program last year that extended free breakfast and lunch to all elementary-school students. Under the aegis of the USDA’s Community Eligibility Provision (CEP), schools in high poverty areas can offer free meals to every child, whether or not they qualify as low-income, and then get reimbursed by the federal government at a set rate.

The school district of Philadelphia also offers universal free breakfast and lunch to all its students, with the former available in the cafeteria, in the classroom or as a Grab & Go, says Amy Virus, acting director of the Division of Food Services.

This district has served about 65,000 breakfasts at 276 feeding locations each morning for more than seven years, as a “commitment the district has made to its students.” The goal, Virus says, is to imbue the following benefits on kids to help them succeed in and out of school.

Cheryl Lynne Potter is a freelance writer from South Jersey.