Technology, courses and training are changing amid economic challenges.

Private religious schools have provided an educational alternative since the earliest days of our country. Today they remain committed to their values and beliefs, even as they change how they educate students and cope with economic challenges and secular competition.

Many parents who were once content to give their child an education that included their family’s religious values now expect a higher standard of academic excellence and preparation for college.

Even religious schools that have always placed an emphasis on high academic standards are making changes to meet these expectations.

“We’ve raised the academic rigors of our schools so our students are better prepared,” says Timothy Sierer, EdD,  president of the Mid-Atlantic Christian Schools Association and headmaster at The Christian Academy, a K-12 school in Brookhaven, PA.

“We offer classes we hadn’t before and a more complete understanding of topics being studied. Our college acceptance rate was always pretty high, but as we’ve raised the bar, our students are getting into a wider variety of colleges and universities,” says Dr. Sierer.

Jay Leberman, head of school at the Raymond & Ruth Perelman Jewish Day Schools in Melrose Park and Wynnewood, PA, says, “We want to be the best overall, not just the best Jewish day school. We’re focused on current trends and research and we’ve embraced technology, not to replace teaching, but to enhance it.”

Technology, including interactive whiteboards, wikis and other web tools, now plays a large role in most classrooms to ensure that students have the computer skills needed for their future and to keep them engaged.

“We’ve transformed our classrooms into 21st century learning environments,” says Mary Rochford, superintendent of schools for the Archdiocese of Philadelphia. “Today’s students are highly engaged in their learning experiences outside of the classroom, so the challenge is to keep them highly engaged where it counts — in learning the skills that will be important to them in their futures.” 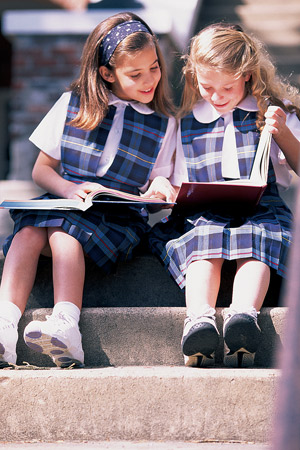 Meeting the needs of a 21st century education isn’t cheap. Computers and software must be purchased and maintained. Teachers must be trained in ever-changing technology and current research in their subject areas. These added expenses come at a time when many schools and parents are struggling in the wake of the nation’s economic downturn

“We have parents losing their jobs,” says Rochford. “Catholic education is important to many of them, but not if they’re struggling to make mortgage and car payments. They have to cut somewhere.”

Catholic parishes subsidize student tuition at their schools, but with weekly attendance declining at Mass in many parishes, funds have declined, says Regina. Other assistance has declined as well. “Prior to this year, the state of New Jersey gave schools $40 for each student for technology,” he says. “They cut that out of the budget this year.”

“Charter schools have also had an impact on us,” says Rochford. “A fair number of students are now going to charter schools where there is no tuition.”

Cathy Weaver, superintendent of schools for the Catholic Diocese of Wilmington, DE, says, “We’ve had a decline particularly at the elementary school level in the last ten years, though that is in part due to demographics as the number of school-age children has decreased.”

A shrinking population of school-age children along with the troubled economy is not only affecting religious schools. According to the Association of Delaware Valley Independent Schools, enrollment has been declining in a majority of independent schools and is down nearly three percent from last year.

To adapt to these changes, some religious schools have closed their doors in recent years. The Diocese of Wilmington has closed or consolidated four elementary schools, and the Diocese of Camden has 15 fewer elementary schools than it did three years ago. The Archdiocese of Philadelphia has closed or consolidated 27 schools since 2005 and more closures are planned for the end of this school year.

“When people see our schools closing, they think we’re dying,” says Rochford. “We’re not dying. Education is expensive. If every school is standing on its own, it’s too expensive. When schools combine, it takes the burden off the parishes.”

“We’ve had too many schools in too small an area,” says Regina. “Our systems were built for the demographics of the 1970s. Consolidation makes sense.”

Though they’ve maintained their programs, other religious schools are making changes to weather the economic downturn and secular school competition. Sierer says members of his association are looking at ways Christian schools can share faculty and staff to continue to offer students a wide variety of classes and activities.

While many students at Quaker schools have been recipients of financial aid in the past, Irene McHenry, executive director of the Friends Council on Education in Philadelphia, says, “Families that didn’t once need financial aid now require it, so we’re looking to expand this portion of our budget and raise funds for financial aid.”

Selma Roffman, director of education at the Jewish-affiliated Kellman Brown Academy in Voorhees, NJ, says that to keep enrollment numbers stable, the school has put more scholarships and financial aid packages in place while asking teachers to increase their responsibilities and limiting faculty size.

Although these are challenging times, religious schools are making plans to stay on top of innovations and strengthen their ability to provide quality education.

“Our schools are beginning to look at providing online classes,” says Sierer. Although only in an investigative phase, Sierer says online courses could supplement classrooms and provide a way to reach out to home-schooled students.

To better prepare students for success in an increasingly global economy, the Archdiocese of Philadelphia has added world language classes in many elementary schools and is planning add them in many more. The Archdiocesan schools are also studying the use of Rosetta Stone instructional software, as a means to offer world languages where teachers are scarce.

As they update technology and curriculum and adjust to shifting demographics and difficult economic times, religious schools continue their important mission. “Nearly 12 percent of all students in Delaware attend Catholic school,” says Weaver. “We play a critical role in educating our men and women and will continue to develop citizens and leaders of the future.”