Our Pick of Pop-Up Books for Kids

Here are some of the best pop-up books for kids this year.

Is it possible that adults buy pop-up books for themselves and use kids as an excuse? Certain subjects with an appeal to adults make it seem obvious.

There is no heinous crime in that, but as the genre matures and competes with other forms of literature and eye candy, the dual audiences come into sharper focus.

Take The Beatles’ Yellow Submarine, a 50th-anniversary production that can only be aimed at those who have a history with The Beatles (who?), the song, the movie and Ringo (best known now as half of the surviving half ). This is less a pop up than a long railway train of a book, scene after scene, with some relief raising the page for the Blue Meanies, a Sgt. Pepper musician, and of course the submarine, with each of the Beatles profiled in relief on the other side. Now this is a pop up where the grandparents have a story to share about that group, the long hair, the breakthrough Sgt. Pepper concept album, and the few songs, like “Yellow Submarine,” (and “Octopus’s Garden”) entrusted to Ringo to sing. 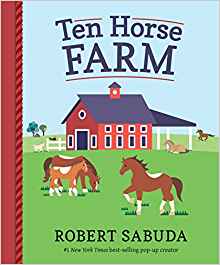 The grand old man (however old he is) of pop-up books, Robert Sabuda, returns this season with Ten Horse Farm, a familiarly spectacular series of 10 farm scenes, each featuring a horse in one of its modes — racing, kicking, resting, pulling and grazing — culminating in nearly a foot-high horse jumping and another foot-high copse of trees for drinking. As usual, Sabuda defies gravity with the height of his creations but also reflects horses’ own defiance of gravity by balancing such bulk on such slim leg and foot supports. It is a perfect combination that takes Sabuda far from narration but close to the pure creation at which he excels. 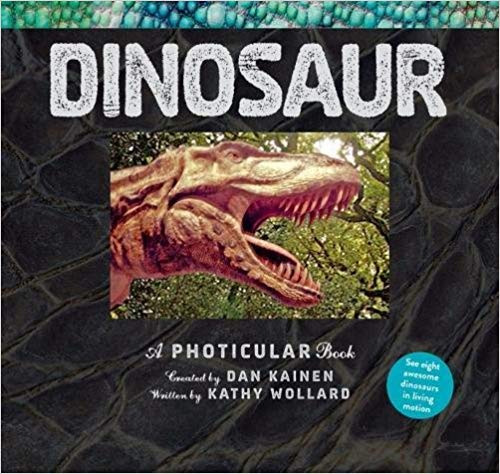 Dan Kainen has created a wrinkle on the pop-up book that moves not from lifting off the page but from  a thin-ridged series of images that give the appearance of considerable movement, like opening impressive jaws, and running, eating and playing or fighting. The hard cardboard books resist tampering, though a kid may well want to inspect what’s behind the moving image.

Kathy Wollard’s story starts with an introduction to the world the dinosaurs inhabited and their descendants that exist today, like birds and crocodiles. The story is short and comprehensive before the book turns to each kind of dinosaur that is depicted, including T. Rex and Sauroposeidon, a dinosaur discovered only in 1994 and deemed to be the tallest, if not the largest. The Sauroposeidon was 60 tons, and the largest elephants today would come up only to their knees.

The combination of sophisticated imagery and up-to-date information make the book highly suitable for students looking to go beyond classroom facts and fill out for themselves the picture of dinosaurs. 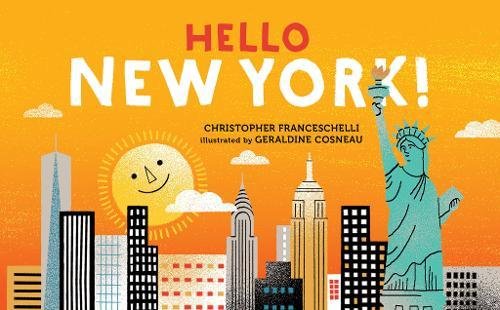 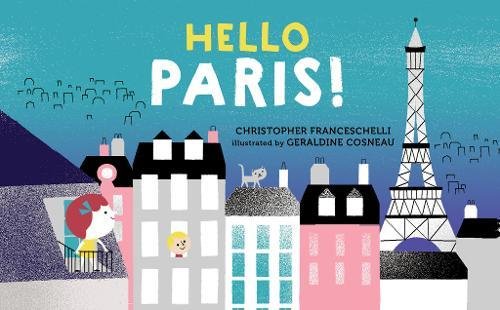 By Christopher Francheschelli and Geraldine Cosneau  Abrams Appleseed • $12.99 each • 2–4 years

Opening with the binding on the short side, these distinctive guides use simple drawings and sophisticated information to give an overview of each of the cities that provide an idea of what to look for and what to find in the big city. The first image places the major buildings on a schematic map, followed by street scenes that bring the city down to personal size. There is enough information for a kid to be sure the family will not miss any major site. 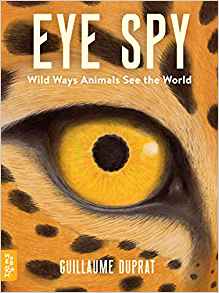 Now here is something unique. The author uses the simplest of forms, the flap, to explore what each animal sees based on its visual capabilities and physical attributes. Many animals see only in two colors, while human beings see in three. This makes the difference between a Technicolor world and a drab view of one’s surroundings. Anyone who reads this book will understand more about what other creatures are capable of seeing and better appreciate the amazing capabilities of the human eye.