Our nation’s adventure as a world power has had a lot of ups and downs, but one positive is making the rest of the world relevant, and often interesting, to Americans.

All of a sudden Egypt and the Middle East occupy our attention and we are drawn into knowing more about it. We are exploring Egypt the way the Greeks once did. The Greeks were the super power of their era and dominated the Mediterranean in the centuries before Romans and Christians arrived. The Greeks were also cultural exporters who devised an intriguing and humanistic cosmology where the gods were human-like and full of foibles.

In Greek Myths (Candlewick, $18.99, ages 9-12), Ann Turnbull tells their stories as though they were human, as indeed they often were, or kind of mythic versions of heroic ancestors. Sarah Young’s illustrations have a playful elegance, like stylized versions of Greek vases, with rich colors and well-designed pages. 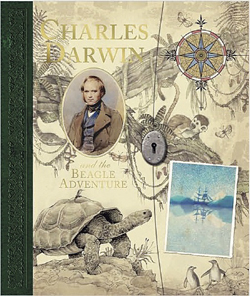 During the long period of British world power, Charles Darwin was one of many adventurous Englishmen. While most of them were soldiers or traders, Darwin was a naturalist who discovered the origins of species on the Galapagos Islands at the Equator on the Pacific side of the Panama Canal.

Charles Darwin and the Beagle Adventure (Candlewick, $19.99, ages 8-12) shows how his observations in a book organized like a scrapbook, with notes and letters pasted on almost every page, solved evolution like a mystery story. 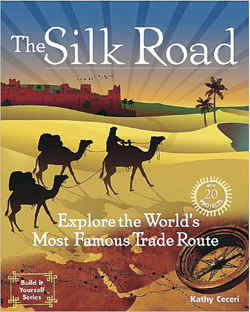 A Trader’s Travels on the Silk Road

Kathy Ceceri’s The Silk Road: Explore the World’s Most Famous Trade Route in the Build It Yourself Series (Nomad Press, $15.95, ages 9-12) brings adventures home with a well-thought-out book on the history of European-Asian trade and crafts, such as rug-making.

The book explores an exotic expanse stretching from Greece to China, taking the perspective of traders exchanging goods in the days before ships connected the world.

Global events might make these places, like Afghan­istan, retreat from accessibility, but our interest in them remains and awaits a more placid time for us to return as visitors.