These books can help kids stretch their brains, learn how historical events affect everyday life, and embark on a voyage to discover evolution. 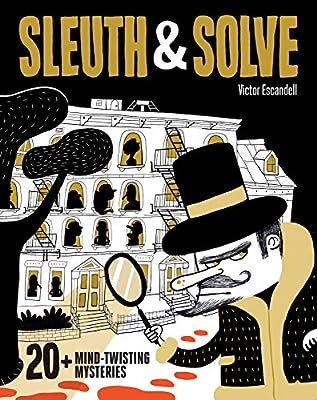 Imagination and logic are two big components of human personality that Victor Escandell stimulates, if not improves, with 20 engaging mysteries in his fun and funny Sleuth & Solve. Each short mystery is easily explained: a dead body at his desk in one, a thief in another, a stranger who appears with no evidence of how he got there. The rest of each story introduces suspects and circumstances illustrated with simple but expressive drawings, ending with the question — whodunit or why? A small flap has the question on the top and the answer underneath.

The author identifies each mystery as based on either imagination or logic, with a five-star rating system on how hard it is. The illustrations help solve the mystery too while enhancing the playfulness of what, in too big doses, could get murderously frustrating. (That’s a warning!)

The Apartment: A Century of Russian History

The Apartment: A Century of Russian History covers a tumultuous Russian century through the thoroughly enlightening changes a large Moscow apartment undergoes throughout the period. It is not just the owners and condition of the apartment, but also what furniture stayed and the uses it underwent as the country went from Czarist times, through Communism, and then into the modern era.

Not only does it reflect the changes in wealth and the accouterments of people’s lives but it also shows what they brought with them from the past and how its uses changed depending on the circumstances of the country as a whole. The book takes a snapshot of the times over the period  as the family grows into new generations, which are a bit confusingly but profuse ly laid out in a genealogical tree at the beginning.

It is not a pretty picture. Parents are arrested and jailed for decades for no reason. The apartment deteriorates as  the initial middle-class life with a dog and cheerful expectations give way to scarcity, rationing, slogans replacing creature comforts, and the sheer terror of life under Stalin as evident in the sad decline of the rooms and people in them.

Originally written in Russian, with the scrapbook-like end flaps full of real photos and documents in Russian, the book would have that much more meaning to a native Russian who would already know the neighborhoods and historic events so graphically described. But for that reason too it makes an excellent introduction to stimulate further understanding and research into the long sad decline Russians experienced. That the book could be written and published at all is something that not so long ago would have been forbidden or sugarcoated. The truth portends hope, if not comfort, for the life of and within the Moscow apartment.

Darwin’s Voyage of the Beagle

Author and illustrator Jake Williams’s vector illustrations look like computer-generated cut-outs. They have a lot of color but solid components and a two-dimensional elegant simplicity. He makes great use of them to illustrate Charles Darwin’s boat trip around South America, a voyage of discovery that resulted in his theory of evolution.

Williams’s stark illustrations give beauty to every page but do not detract from his thoughtful and informative narrative. He shows that the ship, the H.M.S. Beagle, was the length of two buses parked end to end. He shows the interior of the ship and the kit the sailors and passengers had to use on their journey.

The subject gives the author the chance to draw all kinds of creatures and discoveries, plus full scope geographical scenes out of which Darwin was able to learn, absorb and concentrate his thoughts.  The good fit between author and subject makes Darwin’s journey not only a historic feat but also an intimate experience for him and by extension for the reader.

Charles Darwin’s On the Origin of Species 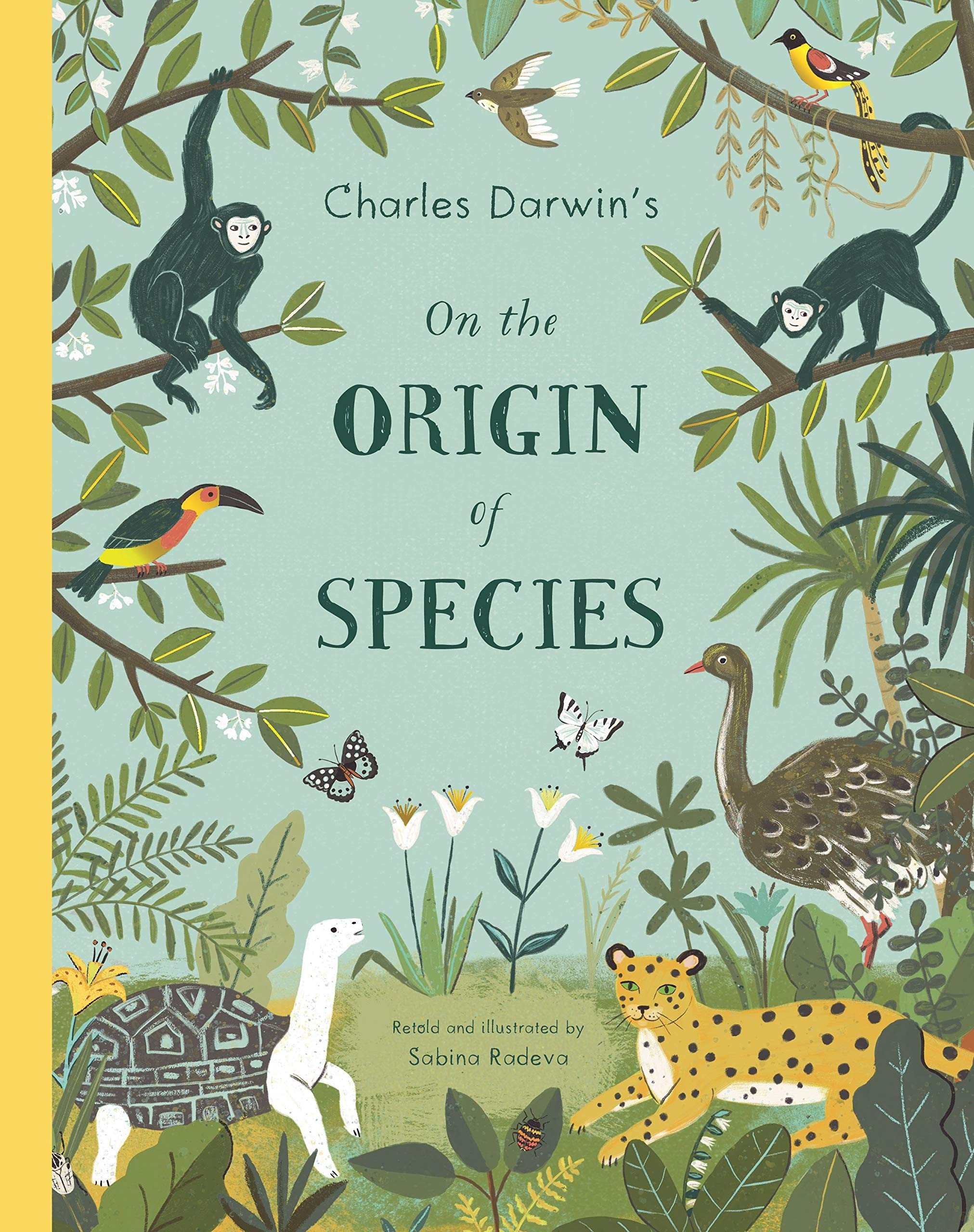 A different approach is taken by Sabina Radeva, whose Charles Darwin’s On the Origin of Species focuses on the book Darwin wrote based on his explorations. Starting with a short history of evolution and anomalies found in nature, the author shows off Darwin’s home and family and local exploration, where one illustration has Darwin saying to the London Zoo’s orangutan Jenny, “Who is studying who here?”

Getting into the subject in earnest, the book follows Darwin’s own study that identifies similar animals as species and the struggle for existence that came to  be called evolution. While only a simple picture book with short words and down-to-earth watercolors of objects shown with their various markings largely on a white background, it is a good introduction to a subject that shaped the modern world. According to the publisher, this is the first picture book of the On the Origins of Species, though there have been many other books on Darwin and, as noted above, his voyage; so it is a timely addition to the canon.