Kids want to be caretakers of their planet, and they get excited about music that encourages good environmental practices.

Older folks have their own interpretation of the “3 R’s,” but kids know they’re “reduce, reuse, recycle.” Singer-songwriter Jack Johnson celebrated the “3 R’s” on his soundtrack Singalongs and Lullabies for the film Curious George. This excellent anthem is available for download for 99-cents on www.amazon.com.

The Case for Recycling

Many family artists lighten their carbon footprint by offering music in recyclable paper CD cases. This is a major shift from plastic packaging nightmares of the past. I’m looking at you, Disney Records, home of the impenetrable plastic CD case. You won’t sacrifice musical quality when you seek out artists who offer their wares in paper cases.

Dan Zanes has been a player in the movement toward environmentally-friendly packaging from the release of his Rocket Ship Beach CD to his latest album of show tunes (76 Trombones). Bill Harley is another long-time user of environmentally friendly packaging for his outstanding discography  (www.billharley.com). Major artists like Ellis Paul (Dragonfly Races), Debbie and Friends (More Story Songs and Sing Alongs, lots of fun for younger kids) and The Deedle Deedle Dees deliver superior music in paper packaging. 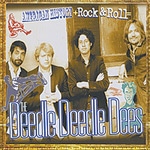 The New York-based Deedle Deedle Dees offer history lessons with their music. At www.deedledeedledees.com is one-stop shopping for lesson plans, lyrics and educational workshops constructed around introducing young ears to often unsung voices in history. Check out their celebration of the father of environmentalism “John Muir” on their latest American History + Rock & Roll = The Deedle Deedle Dees. 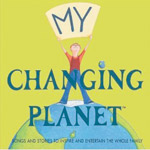 Another informative CD, My Changing Planet, is an anthology with an agenda. Created to increase environmental awareness among families, the album does so creatively with a variety of voices, including Joan Osborne (“World Beneath the Waves”) and The Wiyos (“Gas Guzzling Blues”).

This collection of songs and stories works well because the emphasis is on creating good music first and letting the good environmental messages speak for themselves. The project benefits The Nature Conservancy. Check out the story “Paper vs. Plastic” with its funny approach to the debate that will spark shopping day discussions. Nadia Ackerman’s “Penguin Petition” and its hands-on approach to environmental activism is built around the tale of a couple of penguins who petition the President when they see their home melting. www.mychangingplanet.com