Goopy stockings, salad spinners, and sheep hearts made for an interesting summer day at the Charles Santore Library in Philadelphia.

A mixture of crushed Chex and water squeezed through a long tubular stocking brought howls of “ew!” and squeals of delight from the youngsters, but they weren’t just being gross. With their teacher’s help, they were simulating the way food is digested as part of learning the science of the body. 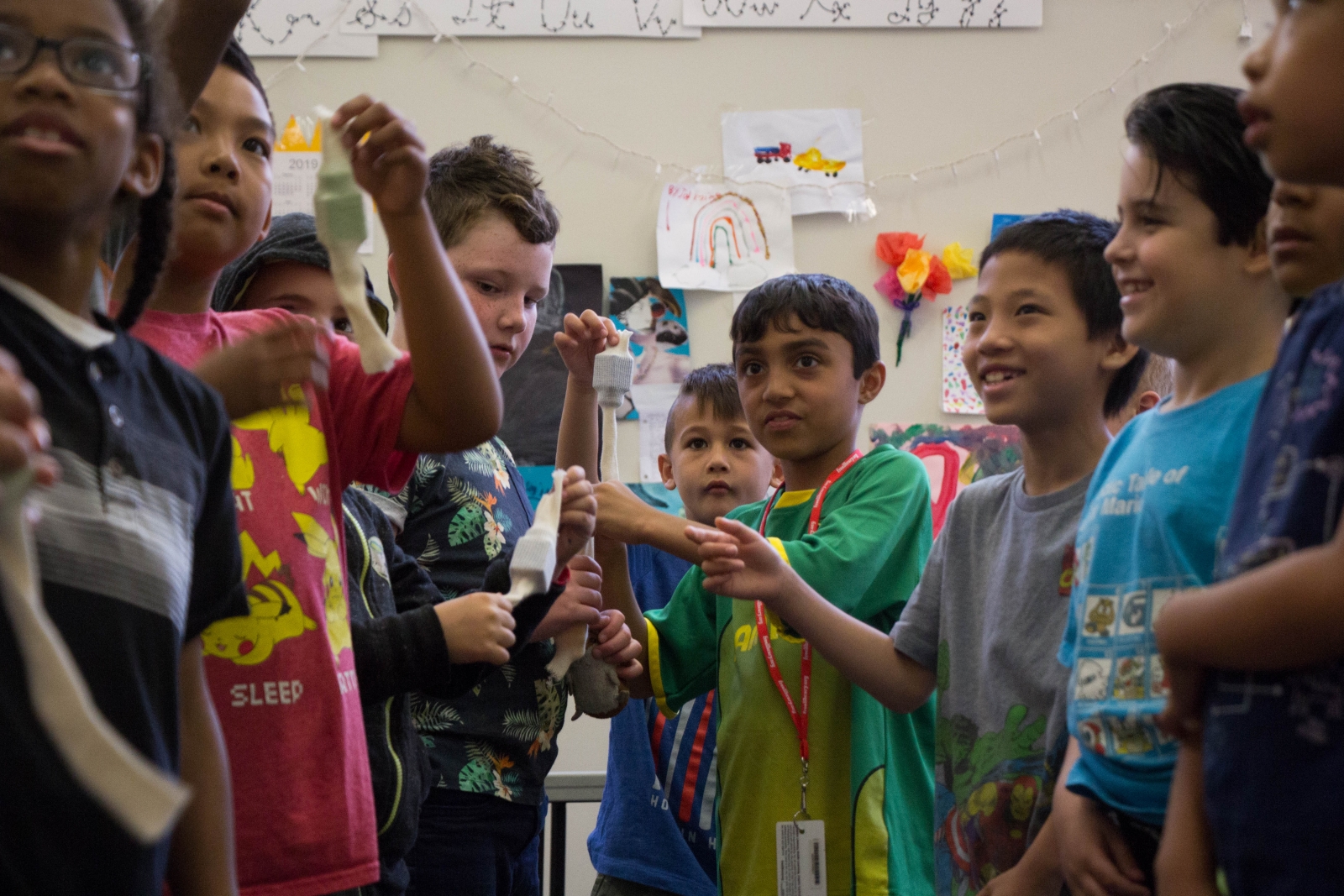 Students simulate a piece of food moving through the esophagus during GSK Science in the Summer at the Charles Santore Library in South Philadelphia on June 27, 2019. (Photo by Colleen Claggett.)

What we’re made of

The 15 soon-to-be second and third graders gathered at the library last month for a fun-filled day of science. The session was led by Jonathan Nguyen, a high school biology teacher at Pennsauken High School in New Jersey, who has taught the GSK Science in the Summer program at libraries around the Philadelphia area for the past fifteen years.  This summer’s theme, “The Science of Me,” explores DNA, digestive, respiratory, and nervous systems through hands-on activities.

Locations, dates and registration can be found at Fi.edu/scienceinthesummer.

This year, sessions run through Aug. 9. Children may only attend one session.

Most local classes are already full, although two August sessions in Philadelphia are still accepting names for a waiting list.

For all students who participated, GSK will host a Family Day at the Franklin Institute on Aug. 10 from 9:30am – 5pm where children get into the museum for free and adults pay a reduced admission.

“It’s a different teaching environment than I’m used to in a classroom. A lot of times science is kind of stiff or kids aren’t allowed to be like this, to really show they’re excited for science,” he says. “But I try to show them science can be really fun and exciting and it’s not about terms or notes.”

Kids crawled under tables to unravel twenty feet of ribbon the length of their small intestines and used building blocks as “chicken nuggets” to put through a “carrot-looking” esophagus to mimic the passage of food.

With goggles and gloves for the sheep-heart exploration, kids had free rein to poke around and report what they found. After Nguyen explained how a sheep’s heart almost directly resembled a human’s, the kids couldn’t believe the slimy similarities.

“Trying to keep them involved during the summer is important, but I think even more than that is to show different modes of learning,” Nguyen says. “Learning isn’t just school, there are other opportunities to learn. Showing a variety of learning experience for the kids is important.”

The pharmaceutical company GlaxoSmithKline (GSK) has offered the summer program for more than 30 years in hopes that kids have fun interactions with science, especially if they do not have access to local science museums.

“Research shows that kids are interested in science when they get their hands dirty and relate it to things they know about in their own life,” says director of GSK community partnership Becki Lynch. “The earlier you can get them interested in science, certainly before their middle school years, the more likely they are to stick with it when it gets a little tougher later on in school.” 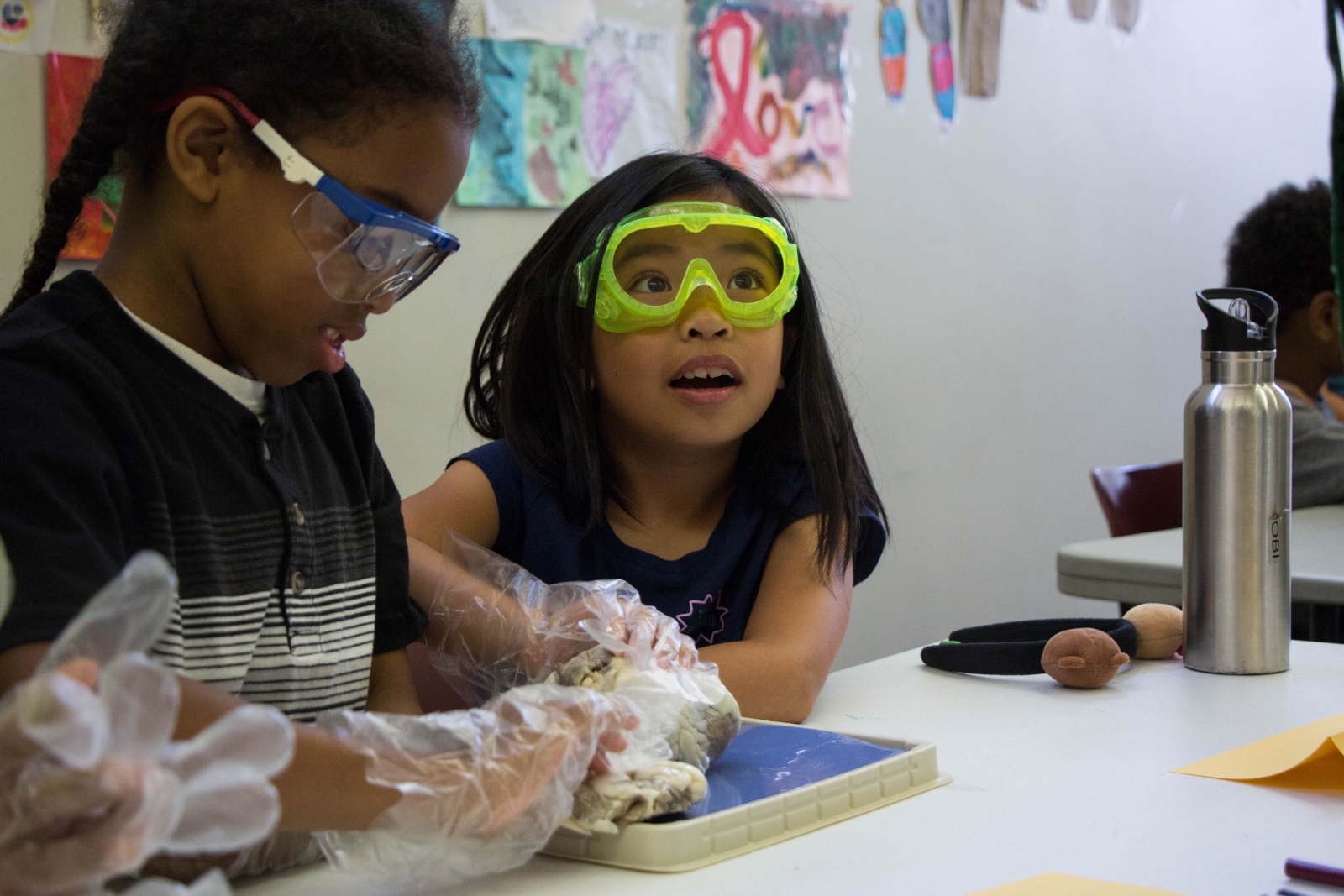 Jason and Tobi feel a sheep heart during GSK Science in the Summer at the Charles Santore Library in South Philadelphia on June 27, 2019.​ (Photo by Colleen Claggett.)

“It’s nice to have free things he can come to where it gives me a break to be with his younger brother for the day. Hopefully he can learn some stuff that we can do at home together,” says Steve Renzi whose 8-year-old son has attended Science in the Summer events for the past two years.

Whether or not the kids learn facts about the body is not as important as getting them involved. Tackling this subject hands-on allows kids to have fun in a way that doesn’t center on textbooks and worksheets. This approach especially works for kids who do not have a strong interest in science from the start. Small introductions to the field encourage kids to explore on their own.

Locally, GSK partners with the Franklin Institute to sponsor programs in Philadelphia and the suburbs. The events are free and spaces fill quickly. Sessions are separated into two levels for kids entering second and third grade and those entering fourth through sixth grade.

Rose Destra is a MetroKids intern and graduate of Temple University.