Chasing Freedom: The Life Journeys of Harriet Tubman and Susan B. Anthony Inspired by Historical Facts

The imagined conversation between Underground Railroad leader Harriet Tubman and women’s suffragette Susan B. Anthony might not be real, but it has the benefit of letting two of the 19th century’s most famous freedom fighters appreciate one another’s accomplishments. Tubman transported slaves from the South to Canada in perilous treks that required courage, quick thinking and complete disregard for one’s own safety. She tells Anthony, who led the fight for women’s right to vote, that she was motivated “to change things.” And that’s just what Anthony did later, in speaking tours that did not have the same intrinsic danger but exposed her to tremendous hostility — from both men and women. Author Nikki Grimes makes their stories vivid with dialogue and the details of era-changing events. Michele Wood’s full-page illustrations show tense and intense faces against the backdrop of 19th-century settings, many arranged in arresting quilt-like designs.

​Leontyne Price: Voice of a Century 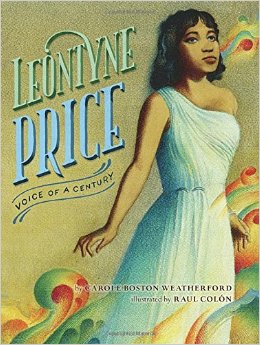 Following the example of Marian Anderson, Leontyne Price exceeded her own ambitions to become a world renowned opera singer. Born in Mississippi in 1927, in isolated and poor circumstances, Leontyne sang in the church choir with a goal of becoming a schoolteacher. But once she got to college in Ohio, the school’s president encouraged her to change her major to voice, which led to her studying at the Juilliard School in New York. Author Carole Boston Weatherford and illustrator Raul Colon make Leontyne’s exemplary life an inspiration, a model for following one’s talents and calling without knowing their ultimate rewards.