The History of Money and The Industrial Revolution for Kids

The History of Money: From Bartering to Banking

By Martin Jenkins; illustrated by Satoshi Kitamura (Candlewick Press; $16.99; ages 7 and up)

Now if they had only made the subtitle From Bartering to Banking to Bitcoins, they really would have had something to teach kids about money. Even so, the book hints at the history of bitcoins, because the digital currency, like any, depends on the belief in its value and stands for a certain amount of tangible goods or services. The author does not hide the complicated early story of money but does a good job of showing its adaptability and pervasive influence over the course of time. He starts at the beginning, discussing how clay pockets were considered money in Mesopotamian times and how gold seems to have earned its status by keeping “its beautiful shiny color no matter what you did with it — it never seemed to stain or rot, and it didn’t burn.” Gold’s endurance and what it represents is also a history of man’s growing sophistication — the metal inspired the first writing — and ability through taxation to build and create the world we still live in. 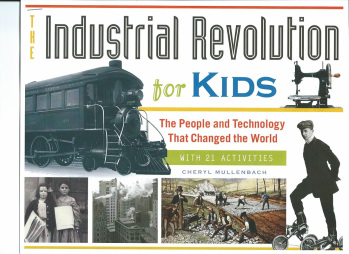 The Industrial Revolution for Kids: The People and Technology That Changed the World

Charles Dickens could have written a book called The Industrial Revolution for Kids that would have recounted the horrors of child labor, and this one has a chapter on child labor, too. There is also a recipe for gruel, the ghastly meal made famous by Oliver Twist. The author does not skimp on the horrors and unpleasantness of cities during the onset of industrialization. Still, the emphasis — in this day and age of technological wonders, fortunes and wizardry — is mostly on what mechanical science brought to the world 150 years ago. Part of the series from Chicago Review Press that includes activities, this title has 21 mostly educational projects, like tracking the manufacturing source of familiar items and calculating 19th-century items in today’s prices, which are 25 times those from 1890.