Your teen wants plastic surgery. Here’s what you need to know before you let her go under the knife.

“Developmentally, teens want to fit in with peers,” says Karen H. Eubank, LCSW, a Haddonfield, NJ psychotherapist who specializes in teen and young adult issues. “Bullying and peer pressure often play a role in a teen’s desire for cosmetic surgery.” 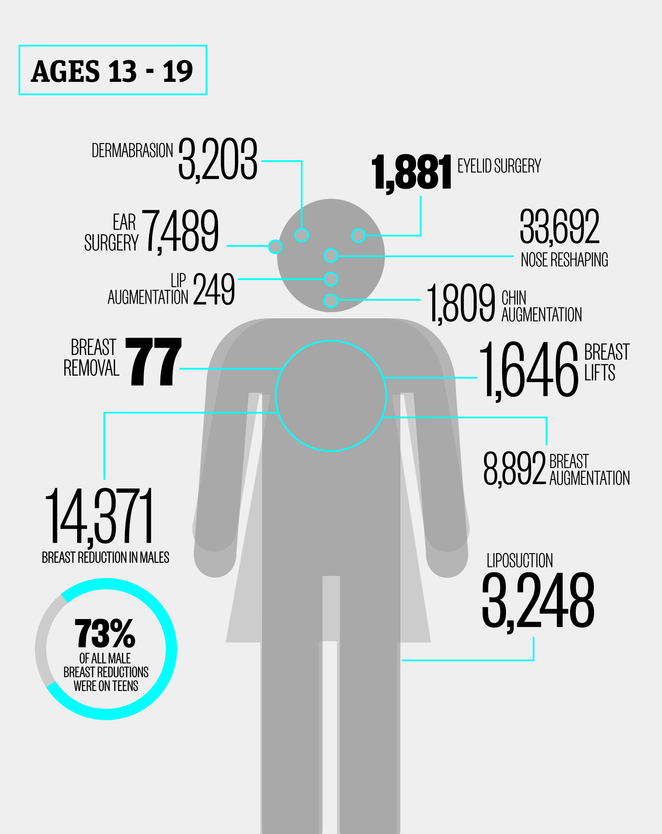 . The numbers represent a steep decline in the trend since 2002, when a reported 220,077 procedures were performed on young people ages 13 to 19.

The goal of some cosmetic procedures — otoplasty (ear reshaping), say, and surgery to reduce gynecomastia (enlarged male breasts) — is to prevent or end peer ridicule. Others — like the ever-popular rhinoplasty (nose reshaping) and scar revision — boost a teen’s self-esteem. Parents who permit these procedures despite the inherent risks do so because they want the best for their child, says Eubank, and “Surgery can help improve self-acceptance in many instances.”

How young is too young?

Somewhat surprisingly, several cosmetic procedures are available to kids. According to the ASPS, rhinoplasty, which can be performed once a child reaches growth maturity, usually by 15 or 16, accounts for nearly half of teen cosmetic procedures. Birthmark removal is covered here. Breast reduction and reshaping can be performed on teens, but augmentation implants are not FDA-approved for minors (girls must be 18 for saline implants and 22 for silicone).

Otoplasty can be performed any time after the age of 5. And according to Scott P. Bartlett, MD, chief of the Division of Plastic and Reconstructive Surgery at the Children’s Hospital of Philadelphia, scar revision can be done at almost any age. For most other surgeries, though, it’s important to make sure the patient is physically mature, because growth spurts could distort the results. “You want to wait until they’re grown so you don’t have to do it again,” says Dr. Bartlett.

In addition to physical maturity, a teen’s emotional maturity and motivation must be assessed. “One or two consultations are necessary to determine if there is consistency in what the patient wants,” says Abdollah Malek, MD, a board-certified plastic surgeon practicing in Newark, DE.

Surgeons also screen for depression, substance abuse or body image issues. “We do not proceed if there is something else going on,” says Dr. Bartlett. Specifically, teens suffering from body dysmorphic disorder — an excessive concern or preoccupation with a perceived defect in a body part or feature — are not good candidates for surgery.

“Body dysmorphic disorder will not be eliminated by ‘fixing’ one part,” Eubank says. Dr. Malek agrees: “Down the road, they’re not going to be happy patients.”

Before the operation, doctors do their best to prepare patients for surgery by telling them exactly what to expect, from pain to bruising and beyond. “We must have a discussion about scar expectations, though most scars are pretty inconspicuous,” says Dr. Bartlett. Pain from cosmetic procedures, he says, is not severe and often very manageable.

Post-op, Eubank recommends that parents encourage teens to discuss how they feel about their new appearance. “Any change, even a positive one, can require an adjustment period,” she says. She also suggests that some coaching can help teens respond to questions from well-meaning friends and family members. A little humor, she says, goes a long way.