Go nose-to-nose with Button and Genny, the aquarium's hippos.

MK recently got to spend time with two happy hippos, Genny and Button, during the media opening of Hippo Haven, the world’s only underwater, indoor hippo exhibit, at Camden, NJ’s Adventure Aquarium.

Whether visitors watch the two on land from the side or the elevated Hippo Look-Out, which provides a birds-eye view of the area, or watch the ladies’ graceful underwater gliding through the glass-fronted tank, it’s hard not to be fascinated by these animals.

Genny and Button are longtime pals, often circling the water together or lounging beside one another at the water’s edge. Both came to the aquarium from Disney’s Animal Kingdom, though Button was born in Mexico. Despite their physical similarities, the two are easy tell apart – Button, at 3,000 pounds, is smaller, while Genny weighs more than 4,000 pounds. Genny also has darker skin and small bumps on her head. Both consume around 30 pounds of food daily, and although they primarily eat hay, their favorite treats are full heads of romaine lettuce, which handlers toss to the pair throughout the day.

While the hippos have been at the aquarium since 2005, new additions to their exhibit let families get a more interactive experience by seeing the animals up-close and in clearer water. 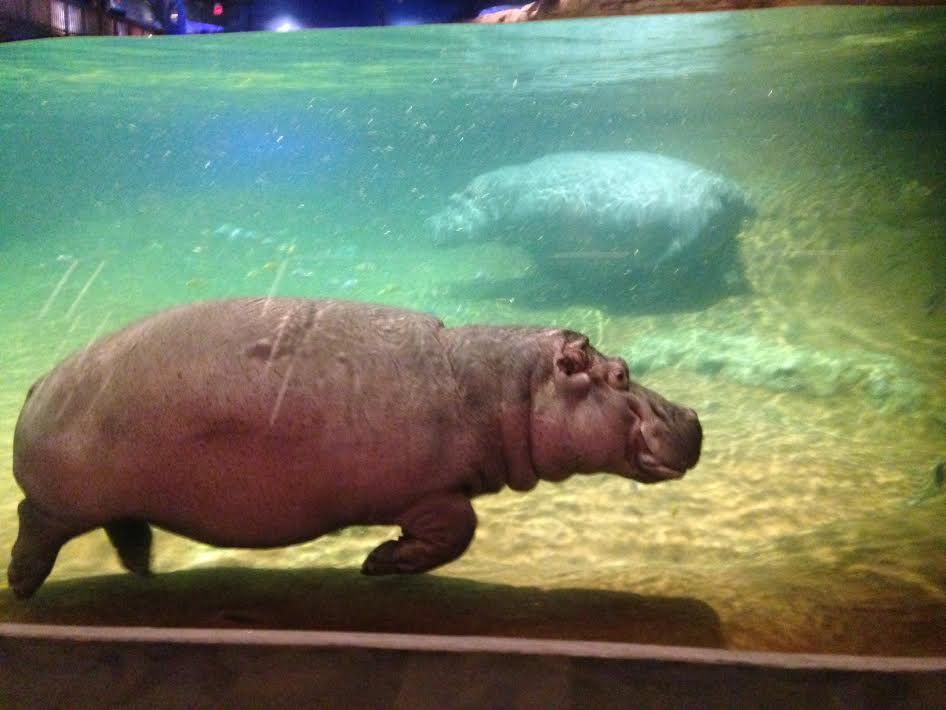 “This is an amazing exhibit for us,” says Adventure Aquarium’s executive director Kevin Keppel. “It’s also special because it’s in Camden and contributes to all of the great attractions in and around Philly.”

Families can also see other animals that call Hippo Haven home, including cichlids — fish that help clean up after the hippos by eating their dead skin cells, algae and other debris — and even a cape porcupine.

Most of our time in the Haven was spent watching the pair underwater, Genny leaping up and down, occasionally pressing her nose to the glass wall and rolling over on the tank’s floor, at the wall right in front of us and Button gliding around the tank in circles on repeat. They seemed happy to show off for us and we could have watched them all day.

“We feel the exhibit speaks to all ages, it’s fun and it gets the stories of the hippos out there,” Keppel says.

If you venture over to Hippo Haven, we’re warning you now: You may leave with a new favorite animal.