This past August Friday with Dad featured a Thursday night surprise, pitch-and-putt and intrigue. First, the surprise: My dad took the boys for an overnight on Thursday, time well spent as they headed off to mini golf and a batting cage, then polished the day off with a trip to the Hollywood Café and Sports Bar, where they ordered diner faves while getting ready to watch the Eagles-Patriots pre-season game. My wife and I took advantage of Date Night with Dinner and a Stroll at Rat’s Restaurant, nestled within the Grounds for Sculpture park and garden in Hamilton, New Jersey. This promotion, which runs through the end of the month, gives guests a three-course prix-fixe dinner plus park admission to stroll the nooks and crannies of the funhouse-like facility after enjoying a delicious meal. Great deal!

Friday morning arrived and I scooped up the troops for a nice breakfast at the Woodbury Station Café in Woodbury, NJ, a wonderfully restored train station now serving “passengers” breakfast, lunch and dinner. Get there early enough in the morning and they’ll start you off with some deliciously warm beignets, gratis.

After working so hard the previous week on the solar light post project, the boys wanted to take it easy. I assured them I had no sinister work plans cooking and opened up the day for their choosing. Still glowing from their miniature golf success, they wanted to try the “pitch” part of the game, so I took them up to Golf Land in Voorhees, NJ. Golf is an extremely challenging game requiring patience, determination and skill. Too bad we didn’t have any of those elements working, but we did grab a quick shake afterward, which led to the inspired notion to hop across the bridge to take in Spy: The Secret World of Subterfuge at the Franklin Institute, now through October 6. 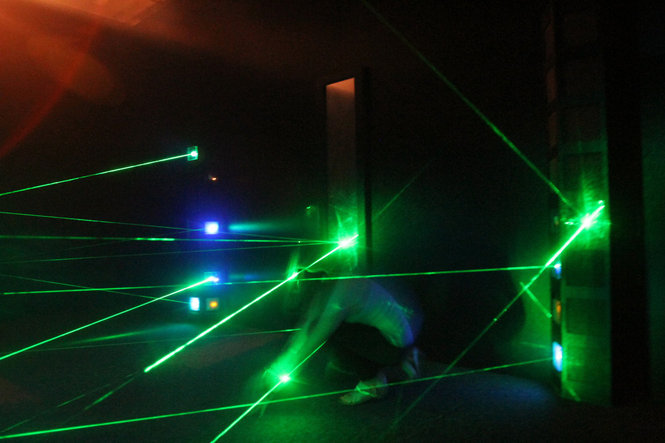 Junior James Bonds and mini Mata Haris will no doubt love this extensive display, featuring 007-worthy gadgets (poison-tipped umbrella and shoe decoder included), as well as the blood-stained axe that killed Leon Trotsky, a segment of the Berlin Wall, an original Picasso lithograph of Ethel and Julius Rosenberg, the original decoy script for the fake film Argo, a parachute-drop mini bike and a semi-submersible canoe. What really popped for the boys were the interactive elements: the voice changer that modulated a recorded message in myriad ways; a disguise maker that superimposed hats, wigs, glasses and facial hair on top of your own picture; and, best of all, the laser maze (above). Both kids threaded their bodies over, under and through the spiderweb-like laser beam obstacle course at least a half-dozen times while I watched on a video screen. My older son even got all the way through without setting off the subterfuge buzzer. I wonder whether a CIA recruiter was watching from the shadows!

Steve Krementz works for a major software company and is a dedicated MetroKids dad.

This article appears in the August 2013 issue of MK Memo.
Categories: MK Memo