Is early action or early decision the right college application for your teen? How will it impact his chances of admission and financial aid?

It’s the fall of your daughter’s senior year.

Together you’ve researched schools, attended campus tours, and worked to narrow down a long list of colleges to a handful of top choices.

She is ready to crank out those applications, but you wonder: Should she apply early admission?

According to College Board, about 450 colleges offer the admission plans. The most common options are known as early decision and early action. You need to understand the differences between the two before you can decide if one of them is right for your child.

Our experts had these suggestions:

You should apply early decision if:

The school is clearly your top choice.

You can afford to attend without financial aid.

You should apply early action if:

You are seriously considering more than one school.

You don’t plan to take the SAT or ACT again.

You should apply regular decision if:

You want your senior-year grades reflected in your GPA.

You want to retake the SAT or ACT.

You need more time to research and visit schools.

What is early decision?

Early decision is binding, requiring a commitment to attend the school if you are admitted. For this reason, you may only apply to one school early decision. The deadline typically falls on or around Nov. 1.

According to Maureen B. Mathis, director of admission at Saint Joseph’s University in Philadelphia, which offers both early decision and early action, early decision is for “students who know the school is their clear first choice and that comparing financial aid offers is not a part of their college search.

“The benefit to early decision is that your college search can be completed by either late December or early January,” Mathis says. “You can then relax and enjoy the remainder of your senior year.”

Applying through early decision or early action increases the chance of admission, Mathis adds. “Since early decision is a commitment to attend, an admissions committee is more willing to admit if the student is committed. ”

Lisa Street, counselor at Brandywine High School in Wilmington, DE, agrees that applying early increases a candidate’s chances “as long as they are a good fit for that school. That round of kids is only competing against other early-decision kids, so it’s a tough group, but a smaller one.”

However, there are potential downsides to applying early, Street notes.

“The student is committing to attend regardless of the financial aid offered by the school and some families may not be as equipped to subsidize the net cost left uncovered by the federal and school financial-aid packages,” Street says.

She also cautions that students who feel pressured to meet early deadlines when they are not completely ready “could suffer from a poorly written essay, proofreading errors, and other avoidable application mistakes which could cost them admission.”

Joseph Tagliaferro, coordinator of student support services at Abington Senior High School in Abington, PA, advises students and their parents to work closely with their school counselors when deciding how to apply.

“If a student really has a strong interest in a college and he knows this is his top choice, and if paying for college is something the family has a plan for, then early decision is a good option,” Tagliaferro advises.

What is early action?

Early action is non-binding and most colleges will allow you to apply to multiple schools this way. Deadlines to submit applications under early action also fall on or around Nov. 1.

Jim Plunkett, executive director of admissions at La Salle University in Philadelphia, which offers early action, says it is for the most serious student — someone who has done his research on the schools, is very interested in that school and wants to get his applications finished.

“It gives that peace of mind of knowing that before the New Year they are going to hear from the school early action,” says Plunkett. “They’re not committed to going to that school.”

When you hear back from schools early, you have more time to work out a financial plan, says Justin G. Roy, dean of enrollment services at Georgian Court University in Lakewood, NJ.

Chrissy Grube, a mother of three living in Plumsteadville, PA, says her two oldest sons both applied early action to a number of schools.

“The nice thing is the schools that they submitted applications to are a little more competitive but they got answers back more quickly,” Grube says.

“To know a little bit earlier whether they said yes or no would change his game plan going forward. If they happened to be all no, it gave him a little more time to submit to other schools, instead of being stunned in early March and not knowing what to do next.” 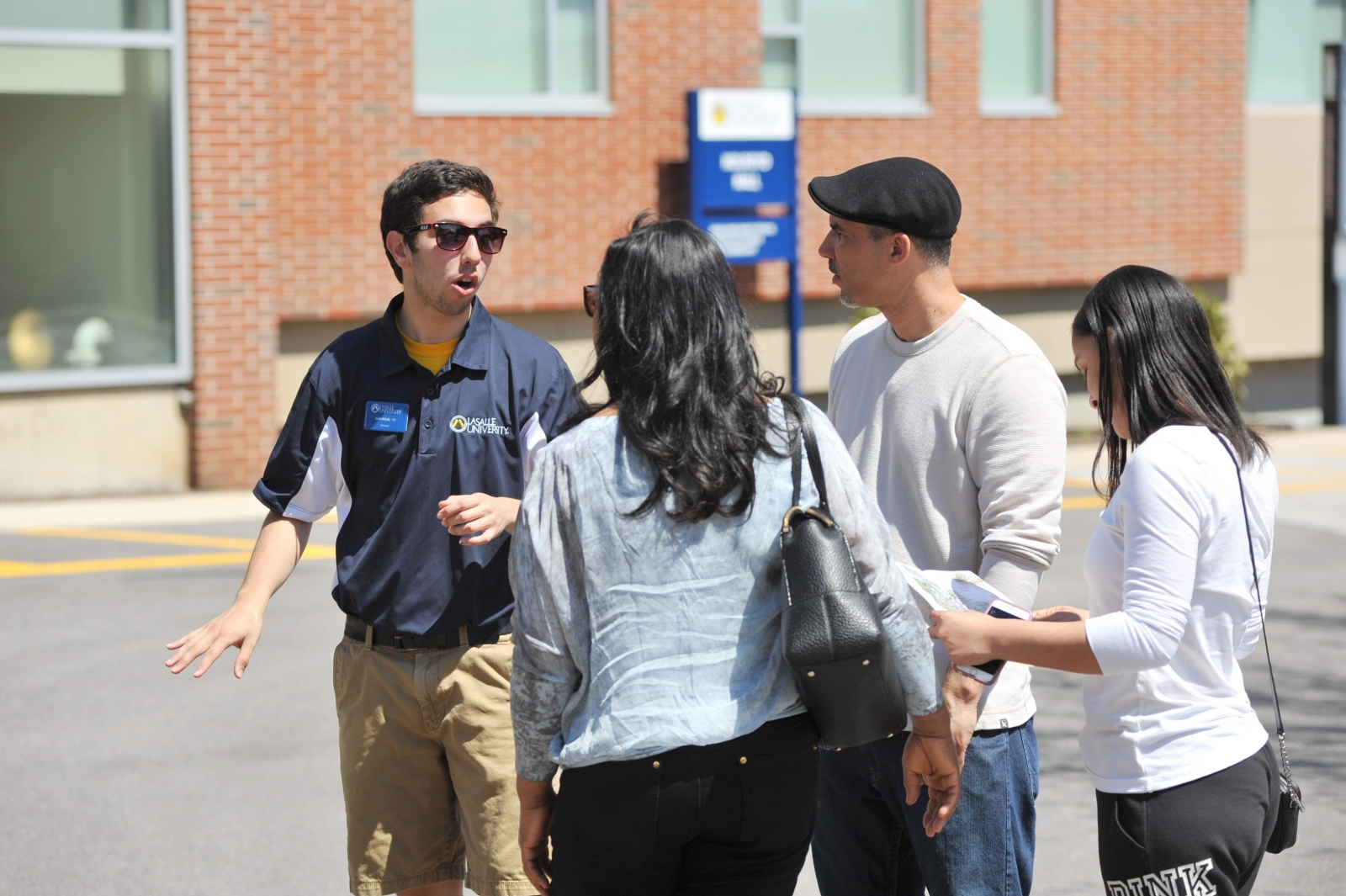 La Salle University student Ben Dylik leads a family on a campus tour during a Blue and Gold Day. These events for accepted students are tailored to further inform families as they make their final college choice.  Photo Credit: David Gehosky.

Who should wait to apply to college?

Early decision and early action are not for everyone.

For the student who needs more time to pull his grade-point average up, plans on taking the SAT or ACT again, or wants to research more schools, there is always the option to apply through regular decision or rolling admission.

Mathis recommends that route for “students who feel that their senior year is going to be strong academically and they want that coursework and their first semester grades to be included in the review of their application.”

Another reason to wait is if you and your child haven’t had a chance to visit the college and tour the campus, says Plunkett, who is going through the process with his son.

“We visited a few colleges and it’s been great,” Plunkett says. “The student usually knows when he’s on the campus and the feeling he gets, if it’s the right fit for him.

“I tell my son, the college search really goes from your head to your heart and back to your head again. When the student finds the fit, it’s an amazing experience because you can see that in his eyes.”

The process isn’t an easy one for parent or student. It’s a big decision with an overwhelming number of steps. So, here are some tips:

“Do your research early and pay attention to deadlines.  No school is perfect and there are many great options for everyone,” says Mathis.

“Take a deep breath,” urges Roy.  “And don’t be afraid to ask for help or ask questions of your admissions counselor. He’s there to guide you. Drop him a message and just say `We’re trying to figure this out.’ Asking for help is a sign of strength, not weakness.”

“Enjoy the process. I know it can be overwhelming. Trust yourself. Trust that voice inside your head that says this is what I want over the next four years of my life,” says Plunkett.