What is living in a college dorm really like?

College move-in day will be here before you know it. Soak up some dorm-life atmospherics at three of the area’s most prominent higher-ed institutes, as told by recent grads.

College Move-In Tips
• Take advantage of school resources. All colleges will send out lists of items that are absolutely not allowed in individual dorm rooms (usually things like electric blankets and, in some instances, microwaves). Make sure you read it before you start packing.
• Let your student lead the way. Since this will probably be the first time your student is living on her own, let her lead the move-in process. Allowing her to deal with residence hall officials will give her a taste of handling college on her own.
• Supplement an allowance with gift cards. Make sure your student spends your hard-earned money (relatively) responsibly by supplementing pocket cash with gift cards to local grocery stores, Starbucks, Target and the like.
• Meet the roommate beforehand. Skype and Facebook make it easier than ever for your student to get to know his roommate before he gets to campus, a plus in coordinating move-in day.
• Hassle-free linens.Buy your twin XL dorm bedding from an online campus service like OCM.com, and your blankets and sheets will be ready for on-campus pick-up on move-in day.

John, University of Delaware, Class of 2013

Dorm living can be tricky when you first move in, especially if you’re not used to sharing a room. I know when I first packed up, I wasn’t sure if I had too much or too little. I briefly coordinated with my roommate about the big things (fridge, microwave, chairs, etc.) and brought what I thought I needed — a few setsof sheets, lots of pillows, multiseasonal clothes, toiletries and bins of food. Because my home is only about an hour away, I wasn’t too worried about forgetting something.

But dorm living is way more than what you choose to bring. It’s the friends you make and the experience you have. I met some of my very best friends during my freshman year. We all lived together in the Harrington complex, ate together, sang together, went out together, studied together and shared most everything.

Because of those bonds we’ve stayed friends through the years. I even lived with a few of them throughout the rest of my time at UD and, soon enough, I might be living with them again. 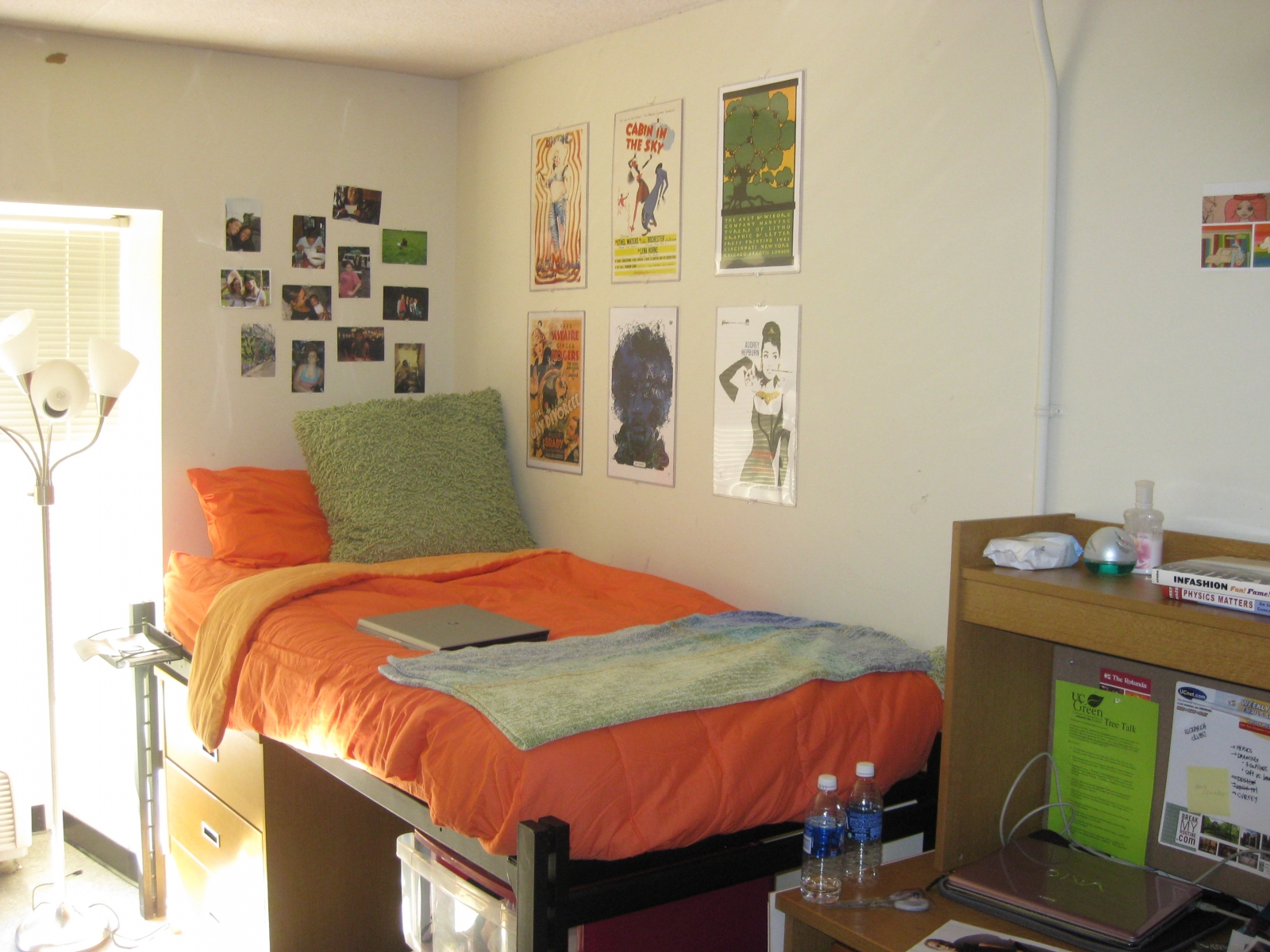 I was placed in the smallest dorm on campus, Myers Hall, in a section of special-interest community housing, meaning that most of our three-story building was made up of students from the arts college. The floors were separated by co-ed wings with a laundry room, a separate bathroom for guys and girls, a communal room and kitchen. With similar interests despite very different backgrounds, the 35 of us in my wing created a sense of community that could not be replicated outside of that time and space.

Living in a dorm so close-knit was like spending a full year at sleepaway camp. Our bedroom doors were always open, groups of us going in and out to class, the dining hall, a party or into the city. We sprawled out in the hallways late at night, working on homework and projects.
Creative collaborations were a daily occurrence, in and outside of classwork.

We decorated our rooms and hallways together; started bands, theater troupes and open mic nights; celebrated birthdays and achievements; and were a constant source of support and comfort during many of our first times away from home, some of us from places as far away as South Africa, Turkey and Qatar. While living side by side did have instances of friction and drama, I have no doubt that every one of us would go back to that dorm today if we could. 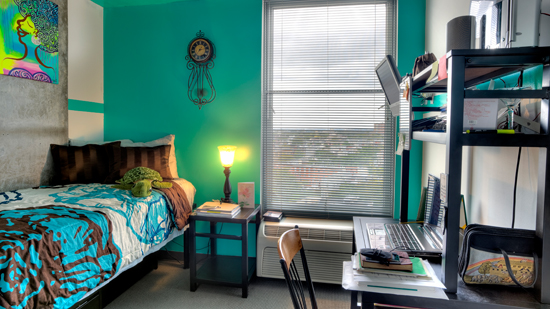 Being a senior in high school, I never really thought about getting my own room away from my parents. But after a full day of visiting open houses of Temple dorm rooms, I chose The Edge, a modern dorm on the edge of campus. The previously furnished dorm was set up as a private two-bedroom with a sharable kitchen and living room. I can imagine that this could be a problem if you had a cranky roommate, but mine quickly went from being a stranger to my best friend.

A highlight of the rooms at The Edge is that the walls are solid; I could not hear anything when I was sleeping or studying. The friendly atmosphere and safe living conditions were a total plus. The close accessibility to campus resulted in my being in class on time, which definitely helps academically. Overall, I wouldn’t take back living at The Edge my first year.

The Edge is still a popular student-driven housing option but is no longer affiliated with Temple. Learn more here. 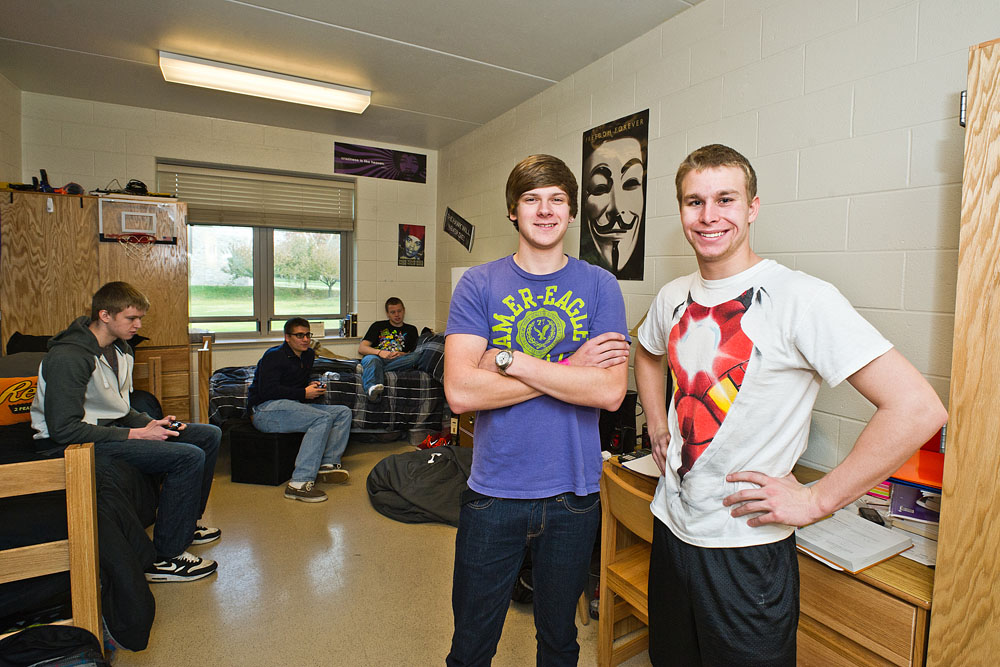 Incoming freshmen to St. Joseph's University have a number of dorm options: Sorin Hall, Lafarge Hall, McShain Hall and Villiger Hall. Each dorm is different and many students will tell you they each come with different experiences.

Sorin Hall: The upside to Sorin Hall is that it is located right next to the cafeteria on campus, but other than that it is not a great place to live. There is no air conditioning and it gets unbelievably hot. The closets are awkward, and it feels like everyone is living on top of each other.

Lafarge Hall: Each student will live in a suite of about five to six rooms and a common area. This dorm might be the best at SJU for developing lasting friendships. Lafarge is a small step up from Sorin.

McShain Hall: For a number of years McShain was the nicest dorm on campus. It isn’t as close to a majority of the classes and the cafeteria as Sorin and Lafarge, but it is far more comfortable. The rooms have a built setup for your television and studies. Students also get their own closet, which is a huge benefit. The only downside to McShain might be that the common rooms aren’t the cleanest places in the world, and classes go on in here, creating unwanted noise.

Villiger Hall (pictured above): The newly constructed Villiger Hall is the best place to live on campus. The rooms are comparable to McShain's, but unlike all the other dorms, the common room comes with a huge flat-screen TV. Additionally, the dorm is right next to the cafeteria and library. It’s hard to find any faults with it.