Don't Be a Beast in Disney World

Going to Disney World? Here's how not to behave to extend the magic for you and others.

When it comes to visiting Walt Disney World, I'm spoiled. My family's been down to see the Mouse six times over the past seven years, most recently for a whirlwind 36 hours before a terrific three-day Caribbean cruise on the Disney Dream (about which much more next week). It didn't take long after brandishing our shiny new Magic Bands at the front gate to realize that Spring Break had brought an insane number of people, both locals and tourists, to the parks — and not all of them were behaving in a "magical" way.

We witnessed mass comportment of the sort we'd never seen over our dozens of days happily hopping among the resort's four parks (Magic Kingdom, Epcot, Disney's Hollywood Studios and Disney's Animal Kingdom). A group of local high schoolers embarrassingly shut down one of the parks' premier attractions (read on for the detes).

As my family and I have come to look at WDW as a true home away from home, we strangely took quite personally the many breaches of conduct exhibited by adults and kids alike. It all inspired me to humbly offer the following guest etiquette tips on how to behave in order to enhance the Disney experience for everyone who comes to this (usually) very happy place. 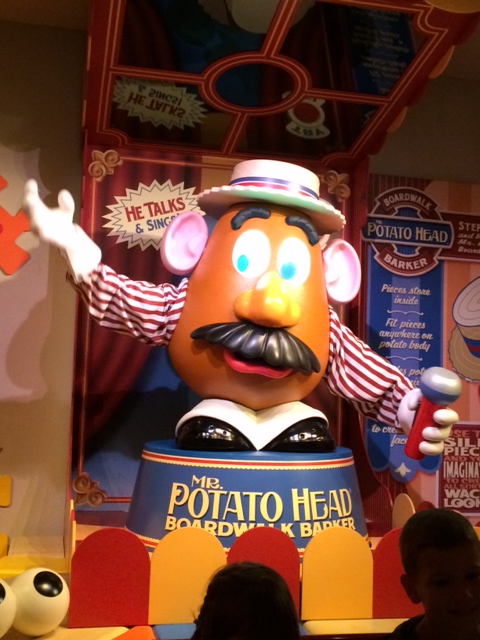 On our past trips to WDW, we saw exactly zero instances of line-cutting, a distinct Disney no-no. Last week, in a single day, we saw it happen a full four times — once on the queue of Toy Story Midway Mania (right as we passed Mr. Potato Head, pictured here), once on Buzz Lightyear's Space Ranger Spin and twice on the new(ish) Under the Sea: Journey of the Little Mermaid. In two of these instances, the perpetrators were moms with young kids, shouldering their way along the serpentine queue, loudly exclaiming, "Sorry, Grandma's holding our spot."

Sorry, not a good excuse. Guaranteed, if one kid has to go to the bathroom, a quarter of the other kids on that packed line also have to go. The difference is, their parents wouldn't dream of ticking off the hundreds of people waiting patiently behind them for the better part of an hour by leaving, then returning to push everyone aside as a designated place-holder got them that much closer to boarding the attraction. As Anna Skamarakas, a local mom and alum of the Disney Parks Moms vacation-planning panel, told us in our Preschool Parents' Travel Guide, “Always hit the restroom before you get into line. I can’t begin to tell you how many times I’ve had to get out of line with a potty emergency on my hands!” And every time she got out of line, guaranteed she got back on at its end. As should everyone else.

The WDW parks are usually pristine, tended by amiable and meticulous custodial cast members (the Disney term for "staff"). So it was quite shocking to see discarded water bottles and snack packaging strewn on the bottom of three separate ride vehicles we boarded — Buzz and Mermaid again, as well as the railroad round the Magic Kingdom. It's disconcerting to get onto an attraction you've been eagerly anticipating only to find someone else's trash got there first. I know how easy it is to get caught up in the thrill and storytelling of a ride, but when it's over, I always check to make sure I take whatever I've brought on off again, including water bottles. There are garbage and recycling cans — attractive ones, themed to the land they're located in — a stone's throw from just about anywhere you can walk. Use them! 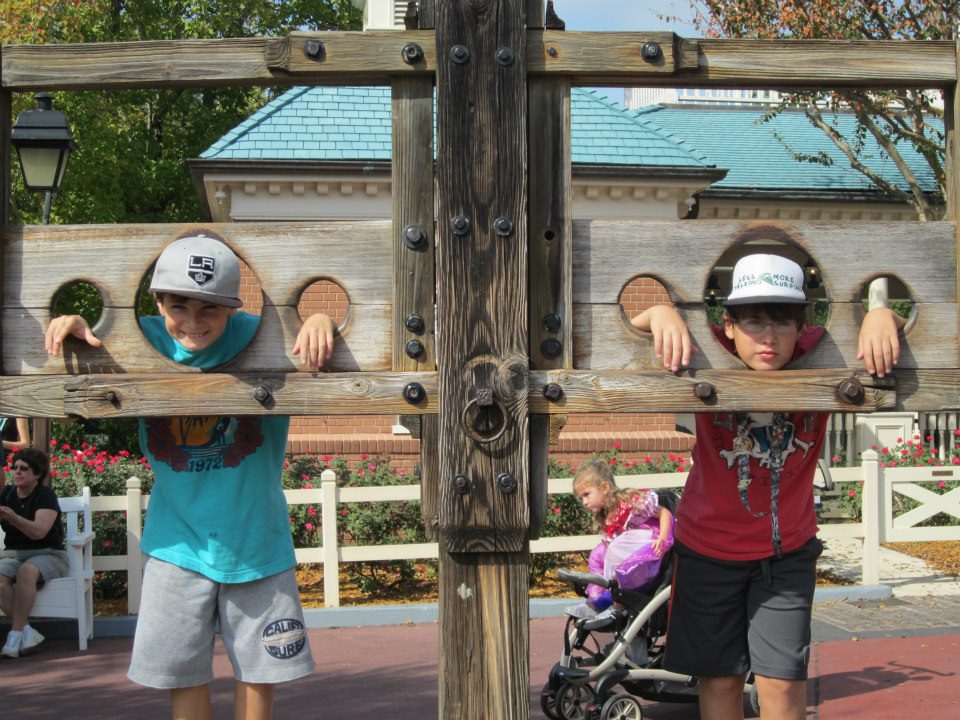 Keep your hands and feet inside the ride vehicle

This exact warning is frequently broadcast on ride queues, and it's no joke. Waiting near the front of the line for Space Mountain last week, we watched in dismay as a group of teens wearing Shawnee High School shirts high-fived each other over the gap between loading dock and ride vehicle, promptly causing the attraction to go into shutdown mode. It's great to know that Disney's ride-safety redundancies work as expected. And I'm sure these kids from Medford meant no harm. But by disregarding the broadcast warning, they caused one of the most popular theme park rides in the world to halt for five minutes, and in turn negatively affected the schedule of everyone waiting behind them. When Disney tells you to keep your extremities inside the ride, do it. The Shawnee kids were lucky they got only a stern talking-to by the cast member at the loading dock and weren't instead escorted out of the park (or to the stockades in Liberty Square).

Keep your kids in check

Last week on Little Mermaid, in addition to the cutting and the littering, the elementary-age boy in front of us had no interest in moving forward with the line; he was too immersed in his iPhone game. When you're shuffling along at a snail's pace, even a half-inch of forward motion spells progress. So it's vexing to stand directly behind a person who's seemingly glued to the spot. Similarly, kids who push ahead of their parents, or sit on the queue barriers, or swing the line-segmenting ropes or chains are bound to run, kick or crash into a fellow queue-standard. Personal space on a Disney line is at a premium, so keeping your kids in check makes the crowded wait more pleasant for everyone. 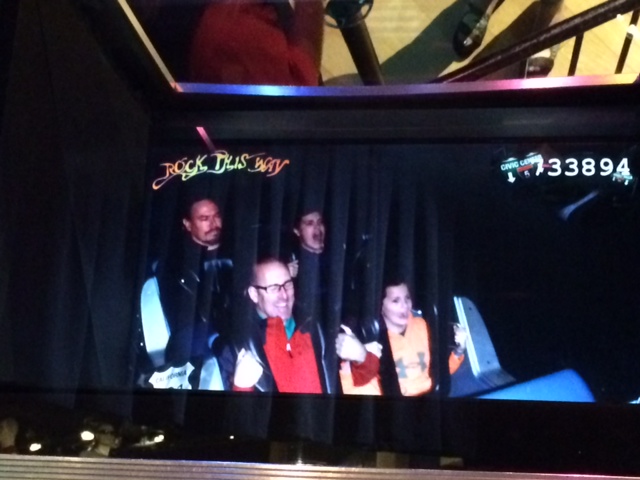 Seinfeld did a whole episode about the perils of stopping short! With so much to see and do, WDW guests tend to rush from one attraction to the next on bustling pathways. When one person stops short to snap a pic, check a map or tweet about a character meet-and-greet, it sets off a domino effect of all-fall-down humanity. If you must respond to a text or pull a wipe out of your diaper bag, step to the side of the path so you don't slow everyone else's forward motion (though you have to get on Rock N Roller Coaster to really speed along!).

Strollers are not tanks

My husband's dubbed the phenomenon of barreling through the parks with baby wheels leading the way "stroller weaponization." When you're propelling a stroller, make sure you're not ramming into people in front of you. My heels were sore after being bumped multiple times last week. When you stop your stroller, park it carefully. There's a throng of strollers at the entrance of every attraction, and the Fantasyland corridor between Peter Pan's Flight and It's a Small World is almost impassable for the baby buggies on either side. Park strollers close to each other to make for maximum room, and tie a bright Mickey balloon to the handle to make it easily spottable.

No talking or flash photography during rides

Young lady behind me at the midnight Frozen screening on the Dream, who shrieked along to every lyric during a non-singalong showing, this tip's dedicated to you. Don't talk or sing during rides and shows — your fellow audience members want to hear the audio track, not your private conversations or musical renditions. If your kids start to talk, ask them to hold their thoughts until the attraction's over. And flash photography not only is a shock to passengers' eyes when taken on a dark ride, it can be hazardous to live performers when taken during a show.

Before you hoist Joey Jr. onto your shoulders so he can better glimpse the parade, look behind you. Chances are you're blocking the view of half a dozen preschoolers who have just as much right to a fair view. If you must put your kid on your shoulders, back up against the walls of the Main Street or Frontierland storefronts lining the parade route, so you're not impeding the fun for anyone else.

Finally, don't forget to look up 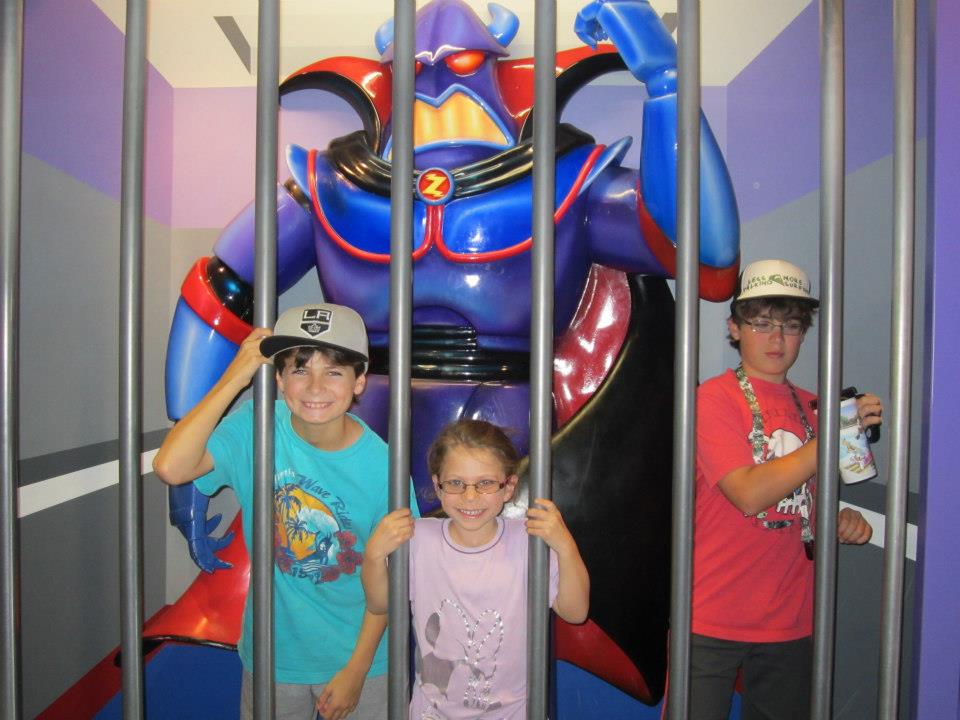 With the implementation of the My Disney Experience app that works in conjunction with the aforementioned Magic Bands, Disney has fully embraced the use of digital tech in the parks. But don't spend the whole day staring down at that little screen. After you double-check your dinner reservation or see how long the wait for Big Thunder Mountain is, stash the smartphone. The real magic is happening all around you.

Behave yourself. Zurg is watching!