With lots of attention focused on going green, consumers are choosing hybrid cars, bringing reusable bags to the grocery store and recycling everything from soda cans to coffee containers.

Concern for the environment leads many new parents to choose between cloth and disposable diapers, wondering which is better for Mother Earth. For most parents, it comes down to a decision between convenience and minimizing the effects soiled diapers have on the environment.

Disposables: Gone, But Still With Us

Before a baby celebrates her first birthday, she will have had her diaper changed close to 3,000 times. On average, a baby soils nearly 10 diapers every day. That adds up to about 6,000 diapers by the time she’s potty trained. According to Consumer Reports, parents will spend between $1,500 and $2,000 on disposable diapers for a typical child.

Every year, nearly 20 billion disposable diapers are dumped in landfills throughout the U.S., according to the Environmental Protection Agency. The additional 3.5 million tons of waste from disposables can take decades to decompose, leaving behind traces of dioxin from the paper-bleaching process, according to the Real Diaper Association.

Some manufacturers address this concern by producing eco-friendly disposable diapers containing biodegradable materials. But because trash in landfills lacks exposure to air and sun, the waste is impeded from decaying naturally.

A survey conducted by the Rechargeable Battery Recycling Corporation (RBRC) probed the why consumers do or don’t recycle, and what would make them alter their behavior to be more environmentally conscious.

Nearly 90 percent of Americans are recycling at least one item, the survey found. Respondents were asked what was the one “green” thing they can’t see themselves doing. For parents with children younger than age 6, the top answer was switching from disposable diapers to cloth diapers. www.call2recycle.org

Proponents of disposables often contrast the number of diapers that end up in landfills with the environmental impact of washing cloth diapers. As resources become strained, the water and energy required to wash and dry cloth diapers exacts a toll.

Laundering diapers requires energy, water and detergents that pollute the nation’s waters. Some fans of disposables even argue that diaper service trucks use gas and oil and add to air pollution.

Tereson Dupuy, founder of FuzziBunz diapers disagrees. “We don’t throw away our clothes or dishes each week. We wash them,” Dupuy says. “This is the same mentality. Using an energy-efficient washer and air-drying the diapers cuts a lot out of the energy cycle. No extra trips to buy diapers over and over again. No packaging waste.”

Additionally, contaminated, dirty water from the washing machine goes into the sewer system. The water is treated at wastewater plants. Ecologist say that treated wastewater is much more environmentally friendly than dumping untreated, soiled disposable diapers into a landfill.

Real Diaper Association
(resources and advocacy for the use of cloth diapers) www.
realdiaperassociation.com

Convenience and cleanliness in the nursery are the two top reasons parents chose disposable diapers over reusable ones. Disposables have an advantage because babies stay dry longer thanks to the modern materials that keep moisture away from baby’s bottom.

Disposables have a sponge-like pad that contains crystals designed to absorb up to 800 times their weight in liquid and hold it in gel form. The result is fewer incidents of diaper rash. Of course, changing (cloth or disposable) diapers frequently is the easiest, most reliable way to reduce diaper rash.

If you wash cloth diapers at home, The American Academy of Family Physicians suggests boiling them for 15 minutes on the stove after washing. This will kill germs and remove soap residue that could irritate your baby’s skin.

Birth of a Diaper Service 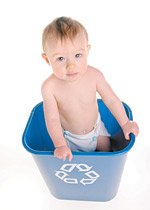 Philadelphia mom Jessica Becker made the decision to use cloth diapers for her two children. “I decided it was more affordable and my kids had sensitive skin,” she says. “But there was no diaper service around.”

Last December, Becker decided to turn her experience into a business and launched Philly Diaper Service, which delivers a weekly supply of fresh cloth diapers and picks up the soiled ones to be laundered. “The response has been amazing,” she says. “We have about 25 clients with more on the way.”

Philly Diaper Service charges $22 per week for 80 diapers, and offers a startup kit with a hamper and diaper covers. “They’re like the plastic pants of yesteryear, but much better, with snaps or Velcro,” says Becker. Delivery is free within 10 miles of the company’s northwest Philadelphia location, with a travel charge added for farther-away clients.

Becker says the cost is competitive with Huggies or Pampers, and less than “organic” dis­posables such as Seventh Generation or Whole Foods. www.phillydiaperservice.com

This article appears in the May 2010 issue of MetroKids.
Categories: Babies
Tags: cloth diapers, concern, diaper service, disposable diapers, environment, landfills, laundry, wastewater, which is better for the Earth