Catholic Schools Look to the Future

The mission of Catholic schools may be based on age-old principles, but their classrooms and academic curriculum are focusing on 21st century advancements. Despite a number of school closings and consolidations, the Delaware Valley’s Catholic schools continue to find ways to help today’s students compete in a global society.

The Catholic Diocese of Wilmington is meeting the need for stronger science and math education through its latest consolidation. Four parishes — St. Catherine of Siena, Corpus Christi, St. Mary of the Assumption and St. Matthew — are coming together to form All Saints Catholic School.

“The new school will build on a classical Catholic education with a STEM focus,” says Cathy Weaver, superintendent of schools for the Catholic Diocese of Wilmington. STEM is an acronym for Science, Technology, Engineering and Mathematics, areas where U.S. students lag behind their peers in many other industrialized countries.

The new school will serve grades PreK-8 and will open in September 2011 in the current Corpus Christi School location in Elsmere, DE. The school will extend its day by 30 minutes to include extra periods of science and math each week as well as additional time for electives in technology and engineering. Electives will include subjects such as robotics, environmental engineering and city infrastructure.

“It’s sad that people will have to let go of their own parish’s school, but it’s great that four parishes are coming together to support this opportunity for our students,” says Weaver.

The theme for this year’s Catholic Schools Week, Jan. 30-Feb. 5, is A+ for America. Students will celebrate the value Catholic schools bring to our country through education and service. For more info visit:

“Now more than ever, technology is part of our students’ future,” says Nancy Caramanico, director of K-12 technology for the Archdiocese of Philadelphia. “We have a strong focus on technology in our schools.”

Access to laptops for each student is increasing and whiteboards, interactive display screens that connect to the Internet, are replacing chalkboards in many Catholic school classrooms throughout the Delaware Valley. Students in the Archdiocese of Philadelphia use Web 2.0 tools to communicate, create and collaborate online, and students in the Diocese of Trenton are using technology to converse with students in England and China.

“Technology really breaks down the walls of the classroom,” says Caramanico. In keeping with Catholic schools’ strong focus on values, “We have a strong focus on safety and digital citizenship. We teach students how to use technology safely and ethically,” she says.

Technology, science and math aren’t the only areas where Catholic schools are focusing to prepare their students for tomorrow.

“Our vision is to have many of our students graduating be bilingual. It’s so important today that our students be able to communicate with others around the world,” says Margaret Boland, EdD, senior associate superintendent for the Diocese of Trenton.

In the Archdiocese of Philadelphia, several elementary schools have partnered with Archdiocesan high schools to provide world language instruction through video conferencing and Skype. In Archdiocese’s newest high school, Pope John Paul II in Royersford, students not only have access to online language courses in more than 35 languages. 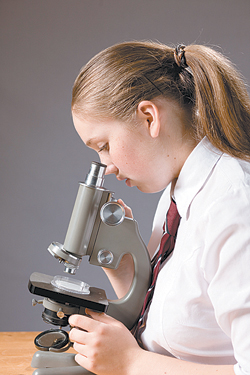 Providing a quality education today comes at a high cost. Catholic schools have compensated for a weak economy and decreasing enrollments by closing and consolidating schools in recent years, but now schools are looking at different ways to sustain and grow their programs.

“I think we’ve come through most of our merging and closing,” says Nick Regina, executive director of Catholic Schools for the Diocese of Camden. Full-time professionals focus on recruitment, fundraising and development at most of the Diocese’s schools.

“Enrollment is up three percent in our schools that have added advancement programs in the last two years,” says Regina. He says most Diocesan schools now following more of a collegiate model.

“We ask parents, grandparents and alumni to make donations to the school,” says Regina. “This is something our high schools have been doing for awhile, but it’s new for our elementary schools.” Many area Catholic schools have sought out additional grants to make new technology and programs possible.

“We’re very confident in the future of our Catholic schools,” says Regina.

“New opportunities open up every day, and we’re keeping our eyes on the future,” says Caramanico.